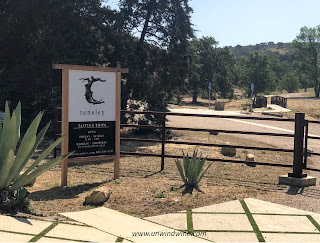 During our Santa Barbara County, Santa Maria Valley Wine Experience, we drove the Foxen Canyon wine trail. On one of our stops, we were referred by one producer to check out Tensley Wines, which was near the estate we were visiting.

We drove by the Tensley vineyards on Alisos Canyon Road, (shown left) which was closed, so we stopped in the Tensley tasting room in downtown Los Olivos.

We first visited a central location serving as the confluence of many producers in Woodinville, Washington, during our Seattle/Woodinville Wine Experience, where over a hundred wineries have retail tasting facilities.

The town of Los Olivos is all about winery tasting rooms with forty different producers having public retail facilities there. It is the anchor for the Santa Ynez Valley wine appellation, situated on State Road 154 just off the major Route 101, about thirty five miles north, inland, from Santa Barbara. 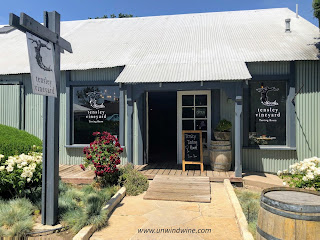 One of the great surprises of our Santa Barbara County, Santa Maria Valley wine experience was the revelation of Syrah being one of the lead varietals in the area. We were expecting to see Chardonnay and Pinot Noir, which are predominant taking advantage of the cool climate being close to the coastal maritime eftects. The cool coastal breezes run up the valleys of the mountains that run perpendicular to the coast.

We were delighted to find several producers featuring or even specializing in Syrah, Tensley included. At the Tensley tasting room, we were able to taste a flight of their Rhône varietals centered on their Syrahs.

Readers of these pages know we're huge fans of Syrah as one of our favorite varietals for big fruit filled every day sipping as well as serious wine pairing with robust foods such as BBQ.

Joey Tensley launched Tensley Wines in 1998 with the goal to produce well-priced, Syrah-driven wines, by "sourcing the best fruit possible and let the unique vineyards of Santa Barbara County speak for themselves."

The first release of Tensley totaled just 100 cases. By 2015, production had grown to 5,000 cases and included five single-vineyard Syrahs, the most in Santa Barbara County. Tensley Syrah’s have made the Wine Spectator’s Top 100, scored 99 points with Robert Parker, and won Food and Wine Magazine’s award for the “Top Syrah in America over $20.”

Joey’s first experience with wine took place when he was just twelve-years-old, when his soccer team toured a winery while taking part in a tournament in France. He vividly recalls the chill of the old caves and the aromas of wines fermenting in barrel. From that moment on he knew he wanted to be a winemaker. “Which pretty much made me the only kid in Bakersfield with that particular dream,” Joey says.

Joey got his start in the wine business working as a “cellar rat” for Fess Parker Winery in Santa Barbara County in 1993. Three years later, he became assistant winemaker at Babcock Vineyards. There, he came to appreciate the importance of the vineyard and the grower.

Over time, Tensley also came to appreciate the uniqueness of Santa Barbara County as a growing region. “We’re one of the only places in the world with a mountain range that runs east-west. That gives us many different, unique micro-climates, so a Syrah grown in one place is so different from a Syrah grown in another. It’s an exciting place to make wine.”

In 1998, Joey became assistant winemaker at Beckmen Vineyards where he was also offered the chance to produce his own label. There, he developed his love for Rhône varietals and decided Tensley would produce only Rhône varietal wines, sourced solely from Santa Barbara County.

Tensley wines gained the attention of the wine press in 2001 when Matt Kramer of Wine Spectator named two of Tensley’s 2001 Syrah’s to his list of the Top Ten Wines in the World, and, Robert Parker scored all the ‘01’s in the high 90’s, calling them “serious, hand-crafted efforts.”

In 2017 Joey also launched “Fundamental Wines” by Joey Tensley. The name was chosen because he felt it perfectly reflected the brand’s philosophy – make fundamentally sound, straightforward wines that over-deliver for the price on every level. Priced at about $18 per bottle, the brand has been a hit with the critics. The 2015 Joey Tensley “Fundamental” red blend received 92 points from The Wine Enthusiast and was an Editor’s Choice while the 2016 scored 90 points with both Jeb Dunnuck and The Wine Spectator. Dunnuck gave The 2016 “Fundamental White” 92 points. 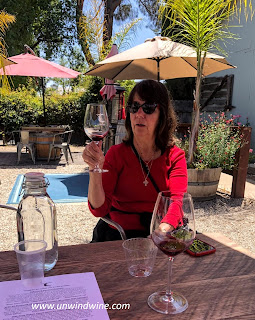 I was not aware of this brand prior to this trip. It was a top discovery and revelation and may certainly be one of our go-to boutique labels going forward. We joined their wine club to obtain a supply of their labels from these tasted and going forward.

After we returned to OC, we visited the two top wine shops, Total Wines and High Time in Cosa Mesa, the top independent merchant in the area. We were surprised and delighted to find Tensley wines on the shelves in both outlets. 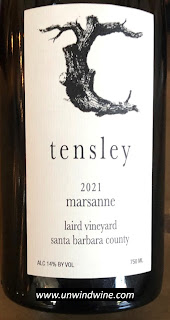 Winemaker's Notes: "A very rare varietal that only a few wineries produce and this is our second vintage. It was the coolest vintage in over a decade thus resulting in a fresh mineral based version of Marsanne.'

"We did a bit higher percentage barrel fermentation to round out the middle pallet and give weight to the wine. In all I am very excited about this fun white wine.'

"A great that will pair well with so many dishes but the one that excites me the most is raw oysters! Look for saline, minerals, quince, star fruit and a slight nuance of almonds. Hint…. The almond flavor will evolve and show more with bottle age." 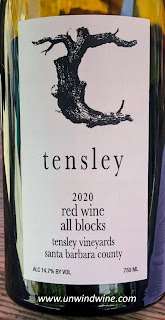 Winemaker Notes: "Exclusively from Tensley and Colson Canyon Vineyards, this blend of Grenache, Syrah and Mourvedre (GSM) is very complex and full of texture.'

"The Grenache brings red fruit and finesse, Syrah imparts riper black fruits to the blend, and the Mourvedre rounds out the complexity with savory notes and tannic structure. A wine built for enjoyment, super complex but juicy and round for easy drinking."

Winemaker Notes: "Everything we farm in house is something very special to us. This site is one of the most unique and special places in the world of wine. High (1400 elevation) in the hills north of the Santa Maria Valley with some of the most iron-laced soils I have seen in Santa Barbara County.'

"This wine always delivers juicy round seamless edges. This is the only wine we add some new French oak, as its weight and power integrates with the oak, adding a bit of toasty buttery complexity. Colson Canyon is such a beautiful example of fruit forward juicy California Syrah. Open it anytime and enjoy its blueberry, cassis and chocolate nuances or leave it 20 years and enjoy its leathery, almondy notes. It does not really matter when you open it, it will deliver."

Might I consider this the Tensley 'flagship'? This reminded me of a couple other memorable highly rated Syrahs, Kongsgaard Carneros Hudson Vineyard and Penfolds Grange. Both are flawless, seamless, and notable for their smooth, polished, balanced profile. While not to that level of perfection perhaps, this is close and evokes the same experience. Can't wait to receive my allocation and try it at home.

Winemaker Notes: "Every year the vineyard percentages change, yet the style remains the same. In 2020 we introduced Laird Vineyard to the blend. By adding this vineyard we continue to work with sandy cool sites to add freshness and savory notes to the final blend.'

"We add complexity and power by including all of our single vineyard Syrah sources. At the end of the day, this wine is both powerful and fresh. It beams with bright acidy and saline notes, rounding out with blue and black fruits to make it generous, juicy and easy to drink. It will age 7-10 years, but do not hesitate to open and enjoy its freshness today."

We didn't get to taste this label during our visit but we got it as part of our wine club allocation shipment. Stay tuned. 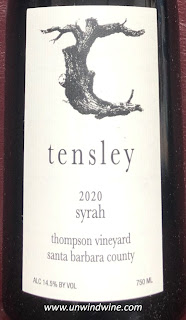 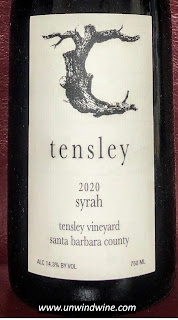 Posted by UnwindWine at 3:28 PM