Posted by UnwindWine at 9:06 AM No comments:

With son Alec visiting from NYC for the holiday, we did some day-after shopping wherein I stopped and picked up some special order wines at the local wine shop. We stopped in the local Binny's beverage superstore in Naperville where the GM offered us this one and only remaining bottle of this hard to get, highly allocated, limited production Old Rip Van Winkle Bourbon.

Alec knew he was on to something when he later posted the purchase on social media and immediately got a groundswell of responses. 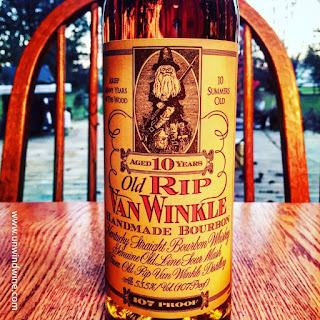 While this blog is typically about wine and has never commented on whisky, it's also about branding, and this label offers a classic study in such.

As with wine, there are certain labels that command an almost cult-like following, where demand vastly exceeds availability. More often, the aura or cache' associated with such a label drives up the price such that it commands a higher price-point than otherwise less noted brands.

Old Rip Van Winkle rides on the coat-tails or in the wake of the producer's flagship premium label, Pappy Van Winkle, which is clearly one of those brands that command a huge following and a robust secondary market. A Washington Post article from 2014 featured the headline, "Pappy Van Winkle’s aged bourbon can’t keep pace with consumer demand" was devoted to the phenomenon.

The article speaks of the secondary market for the label where prices are geometrically inflated, like tickets to a hot concert or finals sporting event. It talks of lotteries set up by certain merchants to fairly distribute their precious highly sought after allocation to patrons. And it speaks of a bottle that sold on e-Bay for $108, an empty bottle! In summation, "The search for Van Winkle has inspired a song, a blog, an app and a delirious secondary market where a bottle has fetched as much as $2,600."

Like many highest revered wine labels, and vintages. the label has received highest acclaim by those that rate such things. In 1996, the 20-year-old Pappy received an unprecedented 99 whiskey rating from the venerable Beverage Tasting Institute. Indeed, all three labels in the brand, this Old Rip Van Winkle (10 year), as well as the Van Winkle Special Reserve (12 year) and Family Reserve Rye (13 year) have collected superb ratings and multiple awards. This only adds to the mystique, as if to legitimatize or rationalize the demand, but what is the cause, becomes the effect.

In the end, the Post article attributes the demand curve to the global demand for things of scarcity and quality. The ultra-premium wine market saw this spike in auction prices a couple years ago. I admit, I unloaded some of my coveted collectable bottles then, in retrospect, at the peak of the irrational exuberance for such, which has since subsided and not been seen since.

The producers are apologetic about the after market pricing effects on their website, "... unfortunately, some retailers choose to use this demand as a reason to increase their pricing. We know it’s often sold for far beyond our suggested retail prices, which you can find on the product pages of this site." Such practices go contrary to the producer's founder's philosophy and mission statement, prominently displayed on their homepage, "We make fine bourbon, At a profit if we can, At a loss if we must, but always, Fine Bourbon."

Such is the aura of this label, that when I visit the local wineshop, where I am a known patron, collector and frequent shopper, the manager takes me aside and with a sense of clandestine acts, shows me a special bottle that he is holding under the desk, behind the counter, and offers it to me as if it is highly coveted contraband.

There have been Van Winkles in whiskey since 1893, beginning with the original Julian Van Winkle, known as Pappy, a consummate salesman and character. During the latter part of the nineteenth century, Julian P ‘Pappy’ Van Winkle Sr worked as a salesman for the alcohol wholesaler W L Weller and Sons in Louisville, Kentucky. Van Winkle and Alex Farnsley acquired the business along with the Stitzel Distillery. They merged the two businesses to form the Stitzel-Weller Distillery, producing such bourbons as Old Fitzgerald and W L Weller. Pappy Van Winkle’s son Julian Jr managed the business following his father’s death in 1965.

The Van Winkle label was launched after the family was forced, by stockholder pressure in 1972, to sell the famed Stitzel-Weller distillery, producer of the W.L. Weller, Old Fitzgerald, Rebel Yell and Cabin Still labels. In the following years, Van Winkle whiskey has been produced as a joint venture with the Sazerac Co. Since then, the entire range of labels are produced at the Buffalo Trace Distillery in Frankfort, Kentucky.

Today, the third-generation Van Winkle sits in the Louisville office that he shares with his son, the firm’s two sole employees, turning down ardent buyers from all over the globe. There have been four generations of Van Winkles working for the brand since Julian Van Winkle III’s son Preston joined in 2001.

One of the distinguishing characteristics of bourbon sold under the Van Winkle label is their extended aging which is more than double the average age of standard bourbon.

According to the producer's notes, "See a rich, copper color. Smell enticingly sweet, spicy, caramel-nut-fudge aromas. Enjoy a fruity, medium-to full-bodied palate with intense dried fruit and toasted nuts notes. Each sip finishes with a very long, bold wave of peppery brown spices, floral honey and charred barrel flavors that balance the weight of the alcohol. It’s a big, bold, aged bourbon that has great balance for its high proof and flavor."

So it was that we had a special father-son experience, a holiday tasting of this special libation. We tasted this neat, (without ice or water). The Rip Van Winkle was incredibly smooth, the sweet caramel tones predominated with hints of coconut, vanilla and nutmeg on the silky sweet finish.