After drinking our last bottle of the 2015 vintage release of this label, and being surprised at how good it was at its price point, we were eager to see if we could acquire any more. Alas, the vintages had moved on and the 2017 release was available in local wine shops. I rushed out to purchase some to see if the current release matched the high QPR (quality price ratio) of its earlier vintage. After tasting the 2017, I went back to our local merchant and purchase every bottle available on the shelf.

I've written before, and reiterated recently on the negociant practice of Ninety Plus Cellars and how they acquire excess or un-allocated inventory from growers or producers and market it under their private label. Each source is anonymized and identified only according to its 'Lot' number to track the same wine from vintage to vintage. Here, below is what they wrote about "Lot 94 Napa Valley Rutherford Cabernet".

"Lot 94 is our most popular Collector's Series wine. A full-bodied Napa Cab from highly-regarded vineyard sites in the distinguished Rutherford AVA. This is real deal Napa Cab at an incredible price.'

"Rutherford is home to many of Napa Valley's most sought-after Cabernets. In contrast to the Cabs of Oakville, those of Rutherford tend to display brighter fruit and an iconic earthy flavor that is often described as Rutherford "dust."' 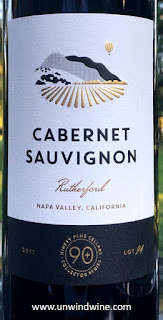 "This distinguished Napa Cabernet Sauvignon was made from fruit picked from vines situated on the east side of the valley in a vineyard that was first planted in the 1890s. Upon alluvial and volcanic soils these densely planted vines produce Cabernet Sauvignon that makes some of the best wine in Napa. This is an all-star Cabernet with an elite pedigree.'

"Sitting in the middle of the St. Helena AVA to the northwest and Oakville AVA to the southeast, Rutherford is the home of many of Napa Valleys sought after bottles of Cabernet Sauvignon. In contrast to the Cabs of Oakville, those of Rutherford tend to display brighter fruit flavors and an iconic earthy flavor that is often described as Rutherford “dust”. We acquired this wine because of the way it stands true to these characteristics and the fact that it can be purchased for a fraction of the cost of most other Rutherford Cabs.'

Upon tasting the 2017 release I found it to be near, but not equal the 2015 in QPR which was a bit better integrated and polished. Although having aged two years in bottle might have made the difference, and the 2017 could perhaps improve and benefit from some bottle aging as well.

In any event, the 2017 is a top flight Cabernet, sophisticated, complex and enjoyable for early gratification, drinking now, and may likely improve further with 2 to 5 years of aging or more. Hence I bought a case plus, all that was available, and will look forward to drinking over the next couple of years.


The negociant's (Ninety Plus Cellars) tasting notes on this release: "Deep crimson in color with lavish aromas of black currant, mocha, and savory herbs with trailing notes of tobacco and vanilla. Full-bodied and well-rounded with soft edges and a lively dose of bright cherry fruit that unfolds into a smooth finish."

I give it 90 points and look for it to add a point with some bottle aging.

Posted by UnwindWine at 9:46 AM No comments: