I have written several times in these pages about Black Diamond Russian River Valley Pinot Noir  from this same producer. Now they've released a Zinfandel from Amador County up in the Sierra Foothills, an area noted for quality Zins.

I wrote earlier about Guadagni Family wines and stated at the time to expect to see more from them. As featured earlier, "sourced from fruit from GUADAGNI FAMILY WINES, a small family run business that according to records is managed by Donald, Joseph, Mary, William and Breanna at their location on Yokim Bridge Road in Healdsburg. They're reported to produce about 1000 cases a year but views of the property show large tracts of young vines and new plantings so we might expect to see much more of them in the coming vintages."

Well it appears they have expanded their portfolio as their website now features six different varietals, their Pinot Noir, a Cabernet Sauvignon, Chardonnay, Merlot, Rose, and this Zinfandel. Only their 2012 release of the Zin is featured and is said to be a blend of Zinfandel and Primitivo.

Either their website is hastily thrown together, or English is the second language of the publisher, or they're just plain careless, as the Winemaker's Notes for this wine contains several spelling errors. Perhaps it was written after a long tasting session (or during).

"Winemaker's Notes: Carfully (sic) selected lots were fermented seperately (sic) in small stainless steel tanks for ten days after a night harvest and four days of cold soaking which added color and depth. The wine was carefully transferred to American oak barrels while in the last stages of fermentation causing an increase in grape extraction. Finally lees were sirred (sic) once a week for eight months imparting a creamy, softer mouth feel. American Oad (sic)aged for 11 months, 1/3rd new oak and then blended to complete our 2012 Zinfandel." 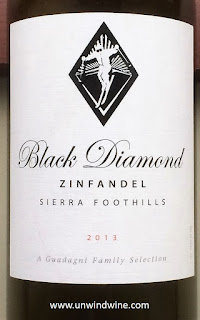 I wrote in an earlier blogpost how they replaced a black diamond on the label with the skier, to bring attention to the skiing metaphor in their branding and naming their wines, the reference to Black Diamond, the designation given to the most difficult and challenging ski slopes. This metaphor works for the boldness of their wines, but doesn't work if considering black diamond slopes are known as Expert slopes, only suitable or applicable to expert skiers - a fun reference never-the-less.

They say their label name "Black Diamond" refers to the 'boldness and courage' of their wines. 'awe inspiring to look at from the rim and personally satisfying in the finish.... with both strength and elegance' symbolic of Black Diamond wines.


My notes for this Zinfandel: Dark blackish garnet colored, medium bodied, a bit flabby initially with alcohol heat that burns off eventually, brambly black fruits with a layer of cognac tones, hints of kirsch, turning to a sweet mocha caramel tone on the finish. Well suited for BBQ, pasta or a great pizza wine at this price point.

Like their Pinot Noir, this provides a decent QPR (quality-price-ratio) at $15.

Posted by UnwindWine at 7:58 AM No comments: