I stopped in Ambassador Wines in NYC on Second Avenue at 54th and met owner Louis Phillips.

For a special dinner I picked up this Napa Valley Bordeaux Red Blend from Beaucanon Estate by winemaker Louis de Coninck, Trifecta is a blend compiled of four estate grown Bordeaux varietals.

The Beaucanon Estate Longwood Ranch sits at the south eastern corner of the Oak Knoll AVA (American Viticultural Area) in Napa Valley where it meets the Atlas Peak AVA in southeastern Napa Valley.

The original historic property dates back to the origins of Napa Valley, part of the Yajome land Grant that belonged to Captain Salvador Vallejo, brother of General Mariano Vallejo, founder of Sonoma and military commander and director of colonization on the northern frontier. The Grant covered over 6000 acres and was first given to Damaso Rodriquez, a retired ensign from the first Calvary division of the Company of San Francisco which petitioned the Mexican government in 1838.

It was back around 1860 when the Longwood name was first associated with the site known for the long row of old-growth oaks that still boarder Milliken Creek flowing through property down at the bottom of Silverado Trail. Later in 1912 Longwood was know for ample prune orchards and a 60 acres market owned by a prosperous dairyman name William Watt, ancestor to Kathryn Hall of Hall Wines in Rutherford and St Helena who produce a line of Walt Wines in his honor.

The first winery was built in 1987 just outside of St. Helena. an impressive facility where they produce almost 30,000 cases of wine annually. After seven years at this facility, Louis de Coninck transitioned to the Longwood Ranch vineyard. There, a historic barn has been outfitted with state-of-the-art equipment where they produce only 12,000 cases annually of carefully crafted wine. 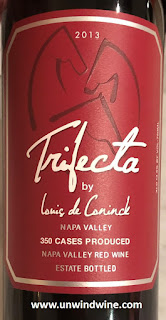 Louis de Coninck, the winemaker, carries on the wine making history of the family, 9 generations of wine merchants originally from the right bank in Bordeaux that can be traced back to 1740. Trained from age 18 in Saint Emilion, he joined his father Jacques in Napa Valley.  His crafts wines that reflect the terrior of Napa Valley, displaying finesse, complexity, structure, mouth-feel and the bright expressive flavors of Napa Valley fruit.  Like all great winemakers, Louis excels at highlighting the natural characteristics of perfectly ripe fruit and the distinctive "terroir" of the vineyard sites.

Conspicuously missing in the blend is Merlot, the most common Bordeaux varietal, which is typically used to  provide softness in the blend when compared with the sterner, later-ripening Cabernet Sauvignon, which tends to be firmer and higher in tannin. The result is a firmly structured  'tight' wine.

Posted by UnwindWine at 6:00 AM No comments: