The ten acre Blackbird Vineyard sits on the Napa Valley floor nestled at the foot of Mount Veeder in the Oak Knoll District appellation in the southwest part of the valley. A former walnut orchard that was planted with Merlot vines in 1997 providing fruit to many of Napa's finest winemakers in notable labels. Michael Polenske purchased the property in 2003 and now produces the Blackbird Vineyards proprietary label crafted by Winemaker Aaron Pott in the style of the Pomerol appellation right bank Bordeaux wines - Merlot based wines blended with Cabernet Sauvignon and Cabernet Franc. The Blackbird moniker reflects this devotion to Merlot and is derived from the word 'Merlot' which is French patois for 'little blackbird.'

Fruit from the property received early recognition when Mia Klein of Dalla Valle fame featured the juice in her highly acclaimed Blackbird Vineyard designated 1999 Selene Merlot (where no less than 95% of the fruit in the bottle must be from the named vineyard). That released received 90+ raitings from three of the top wine critics - Robert Parker, Stephen Tanzer, and Wine Spectator's James Laube.

Blackbird's inaugural release was in 2003 with a Merlot bottling from a small crush of grapes that weren't already otherwise committed under contract to other vintners. That release received 98 points by Vinfolio, proclaiming it, "the best Merlot nobody had ever heard of." The Blackbird 2003 Merlot was also given a score of 95 points by Vintrust citing its complexity and richness, proclaiming it, "hedonistic in length."

The Oak Knoll District is similar to the Pomerol region of Bordeaux in its terroir - soil composition and microclimate. It is one of the coolest regions in the valley - second only to Carneros, adjacent to the south which collects the cool fog that rolls up from nearby San Pablo Bay - and like Pomerol, has gravelly, clay loam soils - ideal growing conditions for Merlot. 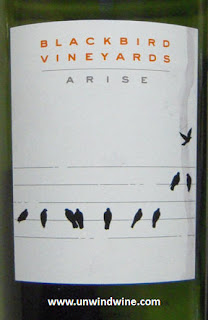 We first tasted this wine with the 2006 vintage. Tonight we tasted it as it best should be - alongside grilled steak, at Del Frisco's Grille in Atlanta Buckhead dining with colleague Tom L and client and partners Victoria, Dave W, and Jim Z. This wine was just received by the restaurant and wasn't yet posted on their winelist which is predominantly California with a nice collection of our favorites and some new discoveries - Cabernets, Merlots, US Pinots and modest but carefully chosen selections from Australia, France and Italy. The extensive list features a very nice selection offered at moderate, fair prices. They should take credit and promote their wine offering exposing it on their website which has no mention of wine whatsoever.

http://www.blackbirdvineyards.com/
Posted by UnwindWine at 8:19 PM No comments: Links to this post