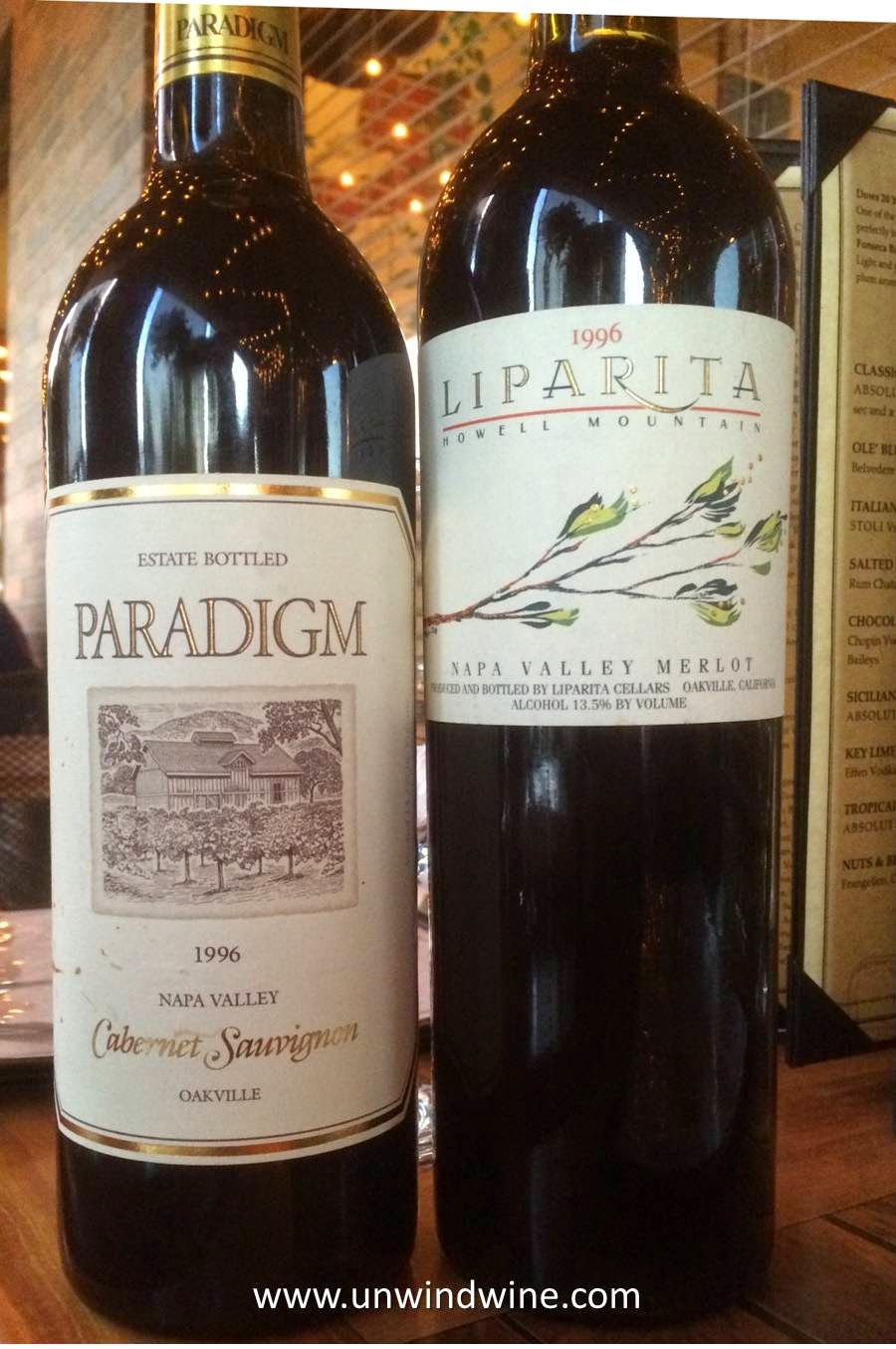 For a spontaneous dinner on the patio at our neighborhood trattoria Angeli's Italian with friends Bill and Beth, I took BYOB two vintage 1996 Napa reds - Paradigm Oakville Cabernet and Liparita Howell Mountain Merlot. Bill brought a bruising Barolo that showed its muscle as a complement to the Italian sausage and pasta. This was an interesting contrast in new world and old world varietals as well as a nine year old vs eighteen year olds that one might think are nearing the end of their years.

We still hold almost a case of Paradigm Cabernet from several mid-nineties vintages so I am tracking their aging and drinkability with interest.

We visited Paradigm during our Napa Wine Experience back in 1999. I recall tasting the Liparita from barrel at the Oakville custom crush facility with then winemkaer Gove Celia during our Napa visit back in 1998. Both of these wines are showing their age, probably beyond their apex, or any chance for improvement, but still within their drinking window. Both show some diminution of fruit, giving way to non-fruit charcoal and earth tones. Yet, each revealed some of its native fruit character at some point during the evening. 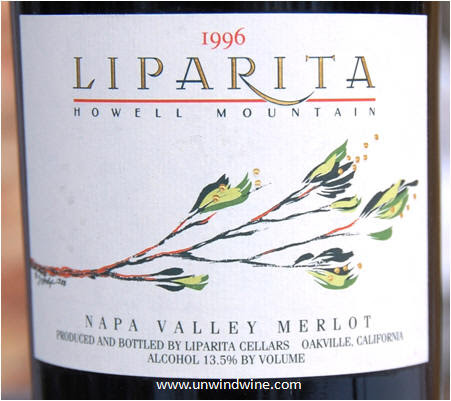 We know that to bear the Howell Mountain appellation that the fruit for this wine had to be sourced from vineyards above 1200 foot elevation, the level of the normal fog line. I don't recall, or perhaps never knew the source. This '96 surprisingly showed bright and vibrant red berry fruit after being open for about an hour.  As written in this blog, we tasted this wine from a magnum from our cellar last year and those notes indicated more stable and complexity in the fruit - another indicator of the enhanced aging of wine in a larger format bottle such as a magnum.

(Then) RM 89 points. Tonight this wine rated 88 points due to the slight diminution of fruit as noted above.

The current Liparita label is under different ownership from the label around the milenium. 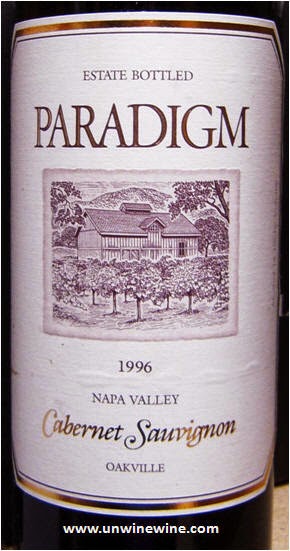 Despite having a case of this wine in various vintages from this era, my only record of tasting this wine was during our Napa visit back in 1999. This was our last bottle from 1996, the remaining bottles are from 1994, 1995, and 2001-02. Ren & Marilyn Harris have owned the property since the eighties, producing wine under the Paradigm label since 1991. Today the winemaker for Paradigm is the legendary Heidi Barrett.

I opened, decanted and then rebottled and recorked this wine an hour before setting out for the restaurant. Upon decanting it released huge aroma's of berry fruits and some floral. After opening for serving the fruit was a bit muted for almost an hour before revealing black berry, black cherry and hints of sweet black raspberry, giving way to a layer of charcoal, anise and spice. Tannins were moderate on the lingering finish. This wine is still showing okay but should be consumed over the next few years.

From a country with a mind-boggling 600 different grape varietals, one of the better known and more popular is Nebbiolo which produces lightly-colored red wines which can be highly tannic in youth with scents of tar and roses, that soften and become more approachable with some age. Nebbiolo grapes are characteristically found in red wines from the Barolo DOCG (Denominazione di Origine Controllata e Garantita) or appellation in the northern Italian region of Piedmont.

Bill's tasting notes from Cellartracker - "Big, bold and fruit forward. Took some time (about an hour) for the "heat" to blow off but when it did we were left with a nicely balanced Italian with notes of raspberry, cherry and a bit of pepper. Finish was medium in duration. Really delicious with a spicy sausage, pasta dish. An interesting comparison side by side with a pair of '96 Napa wines."

Posted by UnwindWine at 10:30 PM No comments: Links to this post