During our getaway weekend to Charleston Seabrooke Island visiting friends and fellow 'Pour Boy' Bill and Beth, we dined on the Kiawah Island village green for their Friday night summer concert series. We had an ideally sited table at the 48 Wine Bar which offers a superb selection of fine wines by the pour or by the bottle. 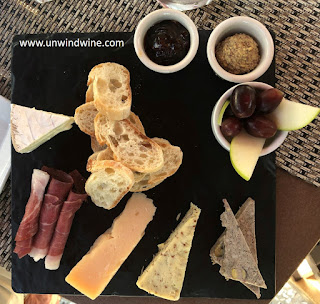 48 Wine Bar on Kiawah Island and 64 Wine Bar here in our hometown Naperville, are of the same owners. Both offer a wide selection of wines from the old and new world - California, Washington, and Oregon, Australia,  Argentina and Italy. They provide the opportunity to taste the wines from the serving stations, or by the bottle, with a selection of wine appropriate foods - starters, salads, sandwiches, select entrees, a selection of cheeses and charcuterie, and desserts - in a casual, trendy wine-food setting.

From the selection, we were tempted with several selections for our favorites, Alpha Omega, Lewis Cellars, Cade, Cakebread, Caymus, Duckhorn, Mondavi, Odette - numerous ultra premium selections from Bond, Opus and Chateau Margaux, and numerous imaginative offerings for experimentation and discovery.

We opted for a discovery wine - a new as yet unknown label, from a known trusted favorite producer. We selected this Grand Cheval Red Blend from well known Domain Serene, who are mostly known for their Willamette Valley, Oregon Pinot Noirs.

Grand Cheval is a signature wine dedicated to Founder Jim Evenstad's grandfather, Carl Michelson, a Norwegian immigrant, and named for his legendary grand work horse that he used to work the fields and pull the sleigh to make his livelihood on the family farm back in Northern Minnesota. 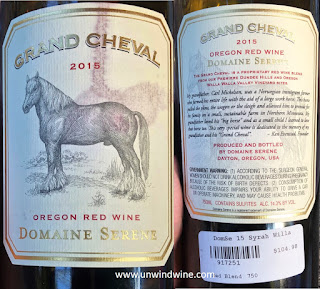 As I have written in these pages, the Walla Walla AVA is America's newest and 'most distinct' appellation. Also, it traverses the Oregon and Washington State border, the only American AVA to span two states.

Notably, the grapes selected for Grand Cheval are sourced from Oregon Walla Walla vineyards. The label is based on some component of Syrah and Pinot Noir varietal grapes. 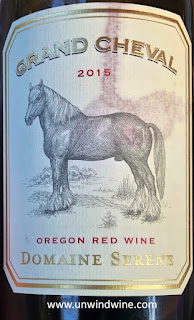 'Grand Cheval' is a unique proprietary blend of Syrah and Pinot Noir, which is sourced from the Seven Hills Vineyard in Walla Walla, as well as vineyards in the Dundee Hills. Pinot Noir is not generally considered a grape blending but the balance seems to work as neither grape dominates or overpowers the other.

Garnet colored, full bodied, complex, concentrated expressive black fruits of black berry, black cherries and plums with notes of cassis, coffee and a touch of charred wood and black tea, a bit of heat on the firm tannin laced finish.

During our getaway weekend in Charleston visiting Bill and Beth, Bill pulled from his wine cooler this limited release Cliff Lede Landslide Fire. This is a release from Cliff Lede that showcases the best of vineyard blocks that are named for classic Rock and Roll songs. The Cliff Lede Estate and these vineyards are in the Stag's Leap District appellation of south eastern Napa Valley.
Cliff Lede is one of our favorite producers and we have extensive holding of his wines going back to his earliest releases going on two decades ago. We have visited the estate with Bill and Beth several times including this private tasting - Cliff Lede Stag's Leap District Vineyard & Winery Visit - Autumn '2009.

The majority of this fruit was sourced from two distinctive blocks named after the rock songs “Landslide” and “Light My Fire,” located on the estate Twin Peaks Vineyard. The gravelly loam in “Light My Fire” produces opulent Cabernet with ripe, dark fruit and plush tannins. The hillside, terraced vines of Malbec in “Landslide” offer an intense aromatic lift to the blend.

Winemaker notes: "This rocking quartet of Cabernet Sauvignon, Merlot, Cabernet Franc, and Malbec greets the senses with an aromatic prelude of blackberry, blueberry, and violet. The inky dark color of this ripe, voluptuous medley segues into a concentrated palate of cassis and cacao nibs, with harmonious notes of black licorice. The gravelly minerality of the Twin Peaks Vineyard is a finale that begs for an encore."

Bill's notes for this wine: "Medium ruby color. Bright, raspberry, blackberry, cherry, chocolate with a hint of licorice on the palate Full bodied with a long finish. Delicious on its own but would be nicely augmented by chocolate, cheese, pate, all the basic food groups."

I believe Bill underscored this wine with his 90 points (although its all in the eyes of the beholder and there are no right or wrong answers). I thought this wine was delicious, elegant, smooth, polished and complex - a symphony (pun intended) of nicely balanced and integrated flavors of black raspberry and blackberry fruits highlighted by notes of floral, mocha and hints of anise with a long supple smooth silky tannin finish.

Posted by UnwindWine at 10:42 AM No comments: