For our anniversary, we took a getaway weekend to the City (Chicago) and dined at Michelin star goosefoot® restaurant. Goosefoot is BYOB which we prefer since we can bring our own selection of wines from our extensive cellar, and drink better wines that are much better than are available on all but a few winelists, or that we might not otherwise be able to afford or justify at restaurant winelist prices.

We stayed in the city at the Westin Riverfront Chicago, a wonderful setting with river views and locale to trendy restaurants, sites and museums. We spent Sunday afternoon at the spectacular Art Institute of Chicago and toured the special Manet exhibition. 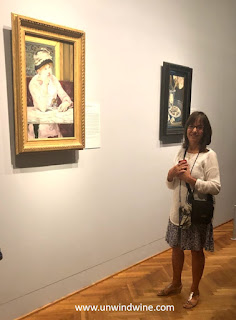 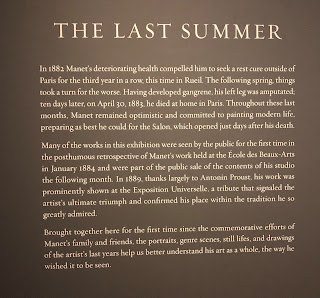 The name goosefoot® is not due to a fondness for feathered friends or feet, but rather, is based on a passion to cook with the highest quality seasonal ingredients grown and sourced from small artisan farms.

Chef Chris and Nina explain: "A goosefoot® or chenopodium genus is actually a plant family of great significance to the culinary world. There are 150-varieties in the family and some of the species in the genus have leaves that resemble the foot of a goose. A few of our favorites are: Chioggia beets, strawberry blite, Swiss chard, Bull’s Blood, Bordeaux spinach, lamb’s quarters, red orach, epazote and quinoa."

Nina Nugent designed the interior of goosefoot® to reflect Chef Chris Nugent’s food: "think classic yet modern, nuanced, approachable and convivial. Like the food and service, the guests will find surprises and detours through the interior."

This weekend that we dined there was the fiftieth anniversary of the Woodstock music festival in New York. The restaurant was adorned with relics of the flower power movement, videos of the rockfest, and music from the period. 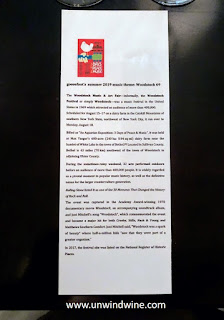 Chris Nugent grew up in a restaurant family in Endicott, New York. As a youngster, upon losing his parents, he lived with chef John Daly and worked at the acclaimed Drovers Inn, an upscale classic French Restaurant in Vestal, New York.

He studied at Johnson and Wales University, College of Culinary Arts in Providence, Rhode Island, and after graduating, he worked at several fine restaurants, including Boston’s Radius, and Tru, Grace, and Zealous in Chicago. We used to be great fans of Zealous during its heyday. In 2009, Nugent was invited by two-Michelin star chef John Campbell to spend time in his kitchen at The Vineyard at Stockcross, located in England.

Chef Nugent’s first executive chef position was at Bêtise in Wilmette, Illinois in 2001.

In 2005, Nugent became executive chef at Les Nomades in Chicago where he earned rave reviews and accolades. We also dined at Les Nomades during this period for a special gala celebration dinner. Zagat Survey said of Les Nomades,  “Number one for food in Chicago”, 2010/2011. Under Nugent’s leadership, Les Nomades received ‘four stars’ from the celebrate Mobil Travel/Forbes Guide, and AAA ‘Four Diamond Award’, 2005 through 2011. Chicago Tribune Dining Awards ‘Best Classic Restaurant,’ Phil Vettel, 2011 – Chicago Sun-Times Restaurant of the Year, Pat Bruno 2010 – James Beard ‘Best Chef-Great Lakes’ semi-finalist, 2010 and 2011. Phil Vettel awarded chef Nugent ‘four stars’ in the Chicago Tribune, and Pat Bruno, Chicago Sun-Times, ‘three and a half stars’ in 2009. Chef Nugent received ‘three and a half stars’ from Chicago Magazine and was awarded ‘Rising Star Chef of the Year’ from Starchefs.com Magazine in 2008. Nugent’s first fan, Sherman Kaplan of North Shore Magazine, gave him a perfect ‘K-Rating’ of ’20/20′ in 2005. 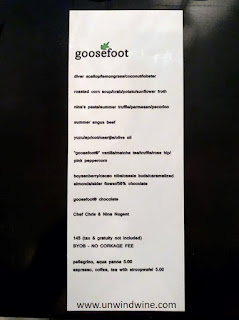 For the special dinner occasion, we pulled from our cellar a selection of several wines and Champagne. Prior to dinner, we drank 'L' Champagne by VD - Veuve Doussot at the hotel with snacks and cheese enjoying the river views from our executive suite. For dinner, we drank a selection of wines we brought from our cellar, selected to match to the extensive food courses: Fantesca Russian River Chardonnay, Marquis Philips (Mollydooker) Integrity Shiraz, and Suduiraut Sauterne. 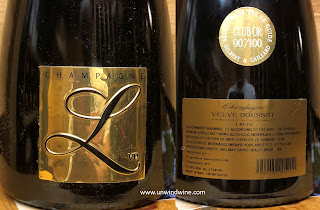 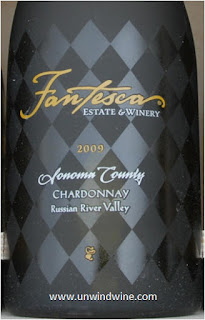 We acquired this label during one of our visits to the Fantesca Estate on Spring Mountain in Napa Valley. We visited Fantesca in 2009, 2011, and in 2007, and hosted producer Dwayne Hoff in Chicago back in 2006.

This label is produced by the legendary winemaker Heidi Barrett and was her first Chardonnay project. World-renowned winemaker Heidi Barrett has been dubbed ‘the first lady of wine’ and ‘the Queen of Cult Cabernet’ by top wine critic Robert Parker. She has been honored with five 100-point scores from the major critics during her career. Heidi is well-regarded for the exceptional finesse and quality of the wines she has crafted over the years.

We first met producers Dwayne and Susan Hoff when they acquired the Spring Mountain property in St Helena and created Fantesca. Dwayne visited us in Chicago during one of his early promotion tours for the 2004 release of Fantesca Cabernet. We visited the winery several times during our Napa Wine Experiences. We hold a vertical collection of more than a dozen vintages of Fantesca and their Chardonnay is one of our favorites. 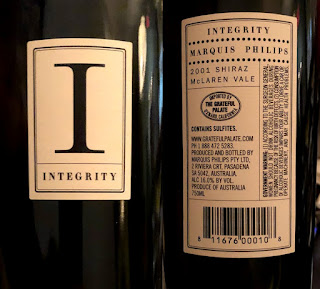 This is the premium release from Marquis Philips, precursor to Mollydooker. and their Velvet Glove premium label. We acquired this at auction a decade ago ... packaged in special gift box - awaiting a suitable occasion for gifting or serving ... OTBN - Open That Bottle toNight!

This got over-the-top 99 and 97 point ratings from Parker who called it 'virtually perfect'.

Back in the day, winemaker and producers Sarah and Sparky Marquis considered this the finest they had ever produced.

We hold a couple dozen bottles of their wines dating back two decades.

Ironically, we hosted Aussie colleague Peter F this weekend in Chicago and it turns out he is a personal friend of Sparky back in Adelaide South Central Australia!

Integrity packs a walloping 16.2% alcohol but didn't come across as the least bit overpowering. Parker cited the anticipated maturity out to 2020 so it was supposedly still at but nearing the end of its apex.

Inky dark garnet purple color, full bodied, big rich concentrated and multi-dimensional, but not as big, forward or unctuously rich as some that we have had, the fruit was also a bit more subdued than expected, black berry fruits accented by white floral, cassis, leather, tobacco, tea and hints of vanilla with fine smooth silky tannins on a long finish. Perhaps the fruit has subsided over the almost two decades.

We enjoy sweet unctuous desert wines with salads, cheese or deserts. This was a nice finisher, a perfect complement to the final course. 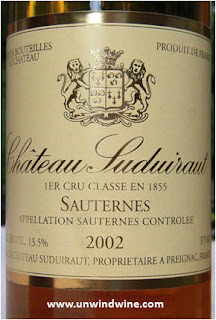 This is a classic Sauterne, a blend of Semillon (94 %) and Sauvignon Blanc (6 %). Château Suduiraut is considered to be one of the finest Sauternes.

The history of Château Suduiraut, dates back to the 1600’s. It was classified as a Premier Cru during the official 1855 wine classification programme. The French conglomerate AXA Millésimes acquired Suduiraut in 1992.

Golden honey, dark amber colored, full bodied yet delicate, nicely balanced fruit and floral aromas, complex roasted and candied notes of apple, vanilla and honey, medium sweetness and a long smooth silky finish.  Not as sweet and unctuous as some vintages, the fruit is more subdued lacking the apricot nectar and honey of some vintages. This showed plenty of botrytis, with predominate notes of smoke, marzipan, almond, ripe apple, and hints of vanilla on the tongue cloying finish.

Posted by UnwindWine at 8:38 AM No comments: