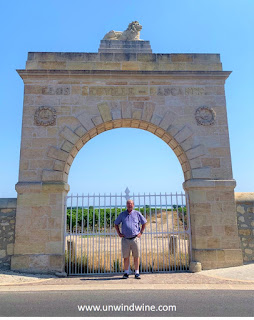 One of the highlights of our trip to the Medoc was a visit to the legendary 'super second' Léoville du Marquis de Las Cases. This is one of the premier labels of Bordeaux and a special part of our collection with holdings or consumed bottles that date back to the 1964 vintage.

We hold a vertical collection of more than a dozen vintages that has consisted of releases from each of our kids' birth years, the vintages of 1981, 1982, 1985, 1990, and numerous other vintages in between or since, several in large format bottles.

We were very selective in contacting but a very few producers to visit during our trip to Bordeaux. As is customary, as we have learned from many trips to wine regions, we focused on but one appellation or growing region for the trip.

Château Léoville Las Cases were very responsive to our request for a visit during our trip to the St Julien Appellation. We celebrated upon receipt of our invitation by opening a bottle of the 1985 vintage Léoville Las Cases.
This kicked off our spectacular week visiting our favorite St Julien Appellation producers. In addition to Léoville du Marquis de Las Cases, we also visited Second Growth producers Chateau Ducru Beaucaillou, Gruaud Larose and Léoville-Poyferré, as well as Fourth Growths Château Beychevelle  and Château Branaire-Ducru. 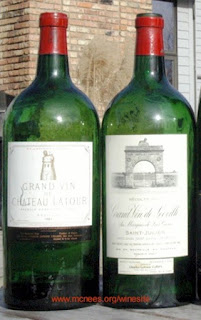 Indeed, we served Léoville Las Cases from large format Jeroboams from our daughter Erin's birthyear vintage at her wedding. We served this alongside Grand Vin Latour from the same vintage, the First Growth Chateau whose vineyards are immediately adjacent to those of Clos Léoville Las Cases.

We're holding a case plus several bottles of son Alec's 1990 birth year release that we'll most assuredly celebrate with him, family and friends as part of his wedding festivities in the coming year. We opened one upon our return to see how it is aging and it was spectacular. We several more opon our return at auction to supplement our holdings.

Las Cases is one of the oldest and most noble Medoc estates dating back to Domaine de Léoville in the 17th century when it was owned by some of the wealthiest and most influential noble French families before it was acquired by the Las Cases family. The estate was split up between 1826 and 1840 as a result of the French Revolution creating Château Léoville Las Cases due to the ancestral birthright, from 3/5 of the original estate and the heart of the domain. 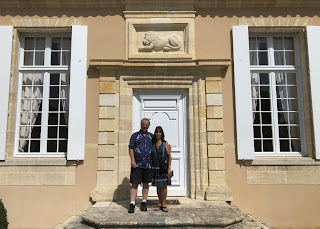 The Grand Vin’s current terroir vineyards were controlled by Pierre Jean, Adolphe and Gabriel de Las Cases who were successive heirs to the property until 1900 when Théophile Skawinski purchased a share in the estate and became its manager.

Léoville Las Cases has now been managed by the same family since the late 19th century and is today represented by Jean-Hubert Delon, sole owner and proprietor of the Château. Additionally, he owns Bordeaux estates Château Potensac in the Medoc and Château Nénin in Pomerol. 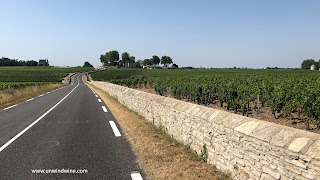 The Grand Vin is the product of exceptional terroirs from the former Léoville estate. The estate vineyards are located mainly in the Clos Léoville Las Cases along the D2 route running along and overlooking the Gironde River. They lie at the northern edge of the appellation just outside the village of Saint-Julien Beyechevelle village as you descend the hill heading north toward the appellation and village of Pauillac. There they meet and are adjacent to the legendary First Growth Chateau Gran Vin Latour estate and Pichon Longueville Comtess de Lalande, and Pichon Baron just across the road, in the Pauillac appellation. The vineyards extend over nearly 135 acres comprised of Bordeaux sanctioned varietals Cabernet Sauvignon (66%), Merlot (24%) and Cabernet Franc (10%) with an an average age of 52 year old vines. 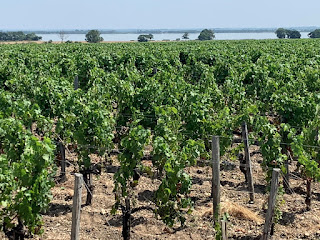 The Clos represents a terroir of very great complexity composed of Quaternary gravel ("graves") over gravelly sand and gravelly clay subsoils. The vineyards run along the Gironde River and the proximity to the river has created the wide diversity of soils, formed over various geological periods.

The temperate waters of the river estuary and the nearby Atlantic Ocean create a moderating special micro-climate that enables very early ripening of the grapes and protects the vineyards from frost. The incomparable terroir gives this great wine its distinctive character and personality.


of
This proximity to the river with the combination of geology and climatic effects influences the growth of the vines, coupled with appellation compliance restricted water supply and a very low intake of nutrients that all contribute to bringing out the best in the great Cabernet Sauvignons and Cabernet Francs. The result is magnificent fruit that consistently achieves the full potential of the site, even in modest or the most challenging vintages.

The legendary estate produces distinctive Cabernet Sauvignon and Cabernet Franc Bordeaux grape varietals that are predominant in the blend resulting in a complex, polished expressive  characteristics which are unique to the Grand Vin of Léoville du Marquis de Las Cases that has been widely recognized as one of the premier producers of the Medoc for decades. 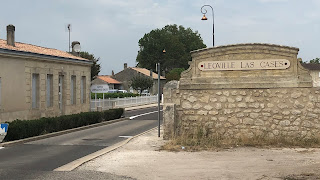 Another label from Domaine Leoville St Julien is Clos du Marquis, another perfect expression of the Saint-Julien features based on structure, harmony, distinction, complexity and ageing potential.

Clos du Marquis was created at the beginning of the 20th century when the vineyard was planted,  inspired by the Petit Clos adjacent to the Château de Léoville, residence of the Marquis de Las Cases.

Clos du Marquis is a historic brand by the Domaines Delon, a separate vineyard that is across the road from Leoville Las Cases, whose first vintage was released in 1902. The creation of this brand was to allow a clear identification of two completely distinct terroirs of the two estate vineyards.

We hold many vintages of the Clos du Marquis and in error always thought it was a second label of Las Cases rather than a distinctive label in its own right. Upon our return home, we opened a 1989 vintage of Clos du Marquis in tribute to visit there and it was excellent. 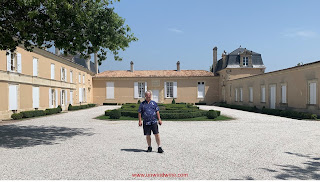 Clos du Marquis is located on some of the finest vineyards with their distinctive terroirs of the Saint Julien appellation, near the Las Cases property and the nearby surrounding prestigious Classified Growths such as Léoville Poyferré and Léoville Barton, and Pichon Lalande across the appellation boundary in Pauillac.


Recently, several vineyard plots in the Clos Léoville Las Cases were uprooted and replanted, and these are now coming into production. To differentiate the fruit from those plots, and to preserve the quality level of the prestigious Grand Vin, Château Léoville Las Cases created a second wine and label, starting with the the 2007 vintage, Le Petit Lion. 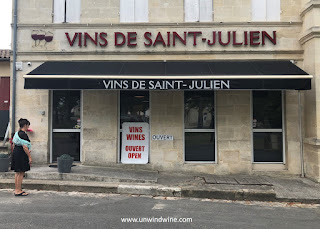 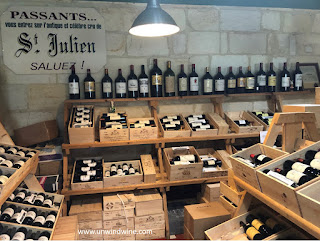 We had never seen or experienced Le Petit Lion and found it at the local wine merchant just down the street from the Chateau. We purchased a bottle and enjoyed it during our casual dinner back at our BnB that evening. We'll be on the lookout for it in the America marketplace.

The Petit Lion shares the philosophy of its two elder siblings; it is vinified and aged in order to preserve its fresh, ripe fruit flavour throughout its life. However, it is designed as a second wine, and is therefore made to be more accessible and for earlier drinking, with a significant proportion of Merlot used in the blend. It also available at a more affordable price point.

From the Delon property's website, "all the wine-producing estates of the Delon family, regardless of their varying levels of notoriety, are devoted to the same philosophy:

We were hosted in our visit by Florent Gentry, Associate Sales Director for the enterprise. He was very gracious and accommodating taking us through the facilities and then treating us to a special tasting of estate labels.

The operations use the most modern equipment and techniques to ensure the highest standards of quality. The grapes are individually sorted by hand and then by electronic optical sorting machines to ensure only the ideal grapes make it into the batch.

We toured the historic production facility with the large oak blending tanks, then the new modern production halls with laboratory command and control center. Florent talked about the tedious and meticulous blending process and the selection of the final cru. He mentioned that the tanks are filled according to each plot in the vineyards. Samples are taken from each tank in small lots and compared in over 100 separate batches by members of the staff in determining the optimal blend. When narrowed to a dozen selections the owners and winemaker and technical advisors determine the final blend. 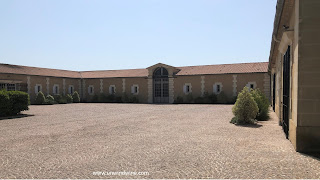 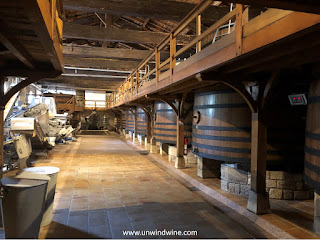 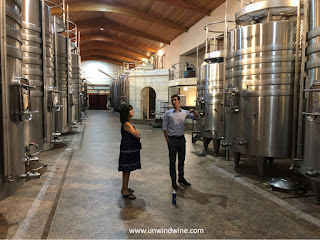 The grand vin is kept in the prime tanks while the second wine is produced in the square tanks in the another production hall. The control center has precise control over each tank during all phases of the process.

The blended wine is transferred via underground pipes into new oak barrels in the adjacent barrel facility where it is aged for two years.

The barrels are racked monthly to remove any sediment and top off the level that is lost to evaporation. The aging barrels are kept in a precise temperature controlled facility. 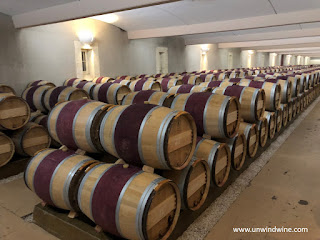 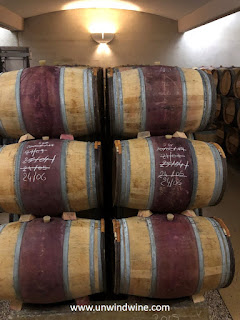 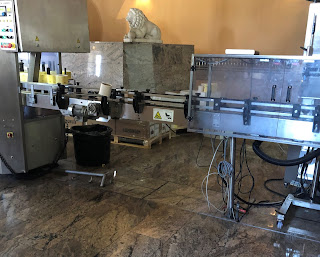 Las Cases have their own bottling and labeling line that etches each bottle with the timestamped batch and lot number for quality control. As is customary, labels aren't applied until the final stage at the latest opportunity to minimize soiling or damage. 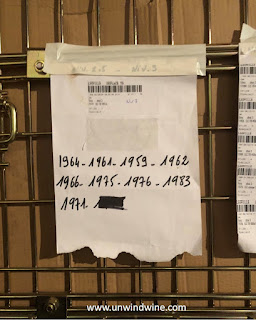 Many vintage bottles had been re-corked as warranted and were labeled with notations accordingly. 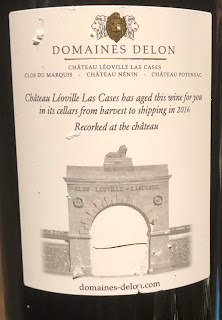 The historic Chateau contains lounges, meeting rooms and a elegant formal tasting room. The Chateau overlooks a formal garden and fountain with views of the Gironde River in the distance. 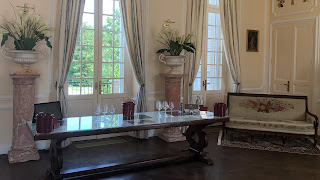 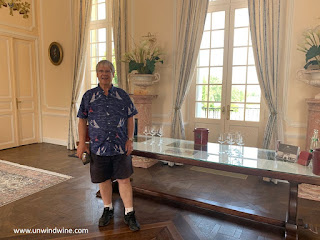 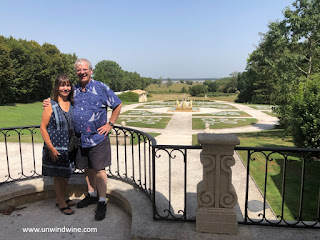 I inquired about a vintage wine from the library and upon our return to Chicago Florent had already contacted our local merchant, Binny's, the Chicago wine super store, about procuring a case of the 1990 vintage in either standard size bottles or magnums. We found a half case in our cellar and are working with Binny's on potentially splitting a case of the standard bottles or the magnums. Extraordinary service and promotion of a very special brand! We eventually acquired another case of this marquis label from a stellar special birth year vintage. Watch for our tasting posts as we celebrate this prized label from our collection or other encounters.

Posted by UnwindWine at 8:22 PM