We tasted and purchased this wine at the Winery during our Napa Wine Experience 2002  - Venge Vineyards, Rossini Ranch (picture left). Legendary winemaker Nil Venge is a pioneer in Napa Valley Sangiovese (in addition of course to his Cabernet Sauvignons).See our Venge Wines Tasting Journal.


Sangiovese may be considered Italy's claim to wine fame, the pride of Tuscany is the most widely planted grape in Italy. These traditionally made wines are full of cherry fruit, earth, and cedar. Sangiovese is found in Chianti (Classico), Rosso di Montalcino, Brunello di Montalcino, Rosso di Montepulciano, Montefalco Rosso. It is the backbone in many of the acclaimed, modern-styled "Super-Tuscans", where it is blended with Bordeaux varietals (Cabernet Sauvignon, Merlot, and Cabernet Franc) and typically aged in French oak barrels, resulting a wine primed for the international market in the style of a typical California cabernet: oaky, high-alcohol, and a ripe, jammy, fruit-forward profile. 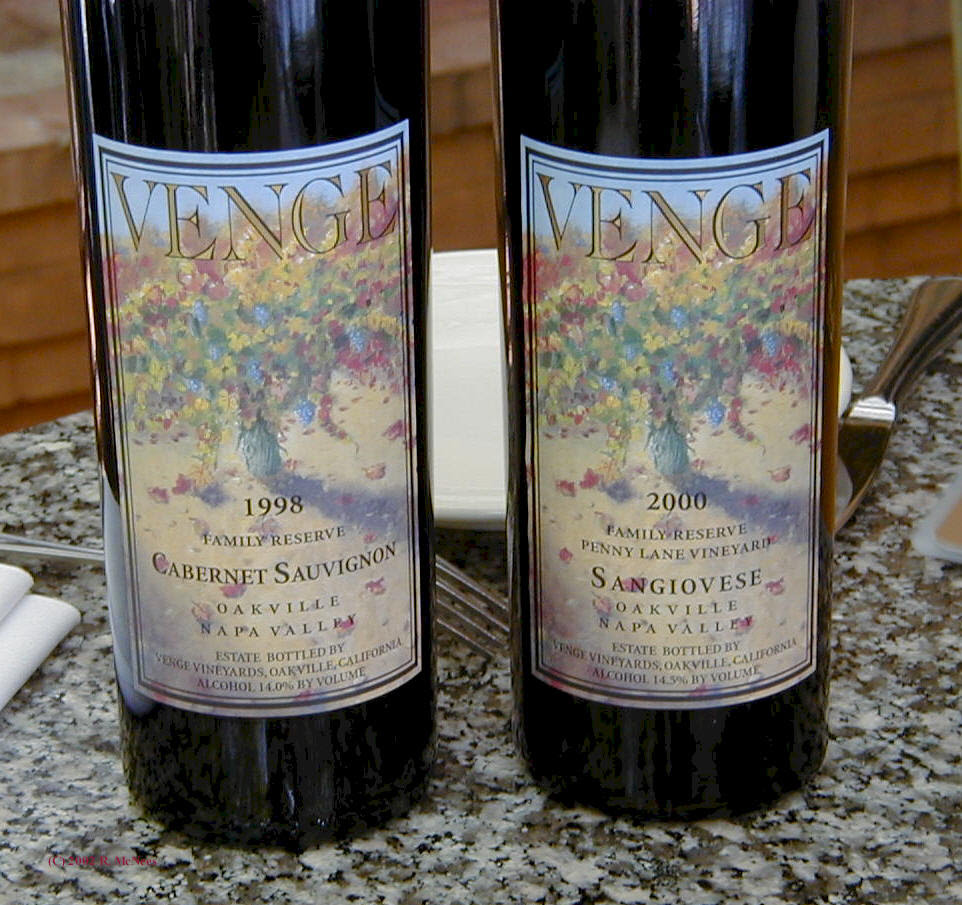 While Sangiovese is the most popular and most widely planted varietal in Italy, it has struggled to find footing outside of Italy. In recent years California wineries have had some success with Sangiovese plantings in the Sierra Foothills/El Dorado County, as well as Sonoma County and the Central Coast.
Nil Venge is well known in Napa circles as consulting winemaker to many top producers including Del Dotto and Plumpjack. Nils has his flagship Venge label as well the Saddleback family label, and with son Kirk is produces wines from their property Rossini Ranch. He and Kirk worked with Dwayne and Susan Hoff at Fantesca in their early releases. He worked with Dave Del Dotto to produce a Sangiovese from grapes grown on the Del Dotto St. Helena Estate.

Venge earned a degree in Viticulture from the University of California at Davis, with a minor in Enology, after a tour of duty with the U.S. Navy.  He began his career in the wine industry as vineyard manager for the Charles Krug Winery, moving to Sterling Vineyards in the early 1970s.Soon thereafter, Venge made the leap into professional winemaking when he took a position as the first winemaker and general manager for Villa Mt. Eden in Oakville, California (now the site of PlumpJack Winery). An outstanding run of exquisite Cabernets from 1975-1979 put the winery on the map and established Venge as one of the industry's new stars.
In 1982 Venge become a minority partner with Dennis Groth in the newly-formed Groth Vineyards & Winery. That year he also  established Saddleback Cellars. It was at Groth that his 1985 Reserve Cabernet earned a 100-point rating from Robert Parker Jr.- the only perfect score ever awarded to an American winery at that time. Venge workedwith Groth until 1994 when he left to focus on Saddleback and continued to consult with other wineries in the area. During this time Del Dotto emerged and was cited as one of the 'undisccovered dozen' emerging producers in Napa Valley. I talk more about this group in an earlier blog posting -PlumpJack Winery Napa Valley, Winemaker Dinner when we our featured winemaker was Plumpjack Assistant Winemaker Mary Pisor.

The 2000 Venge Vineyards Sangiovese is grown on the Venge Family Estate Penny Lane Vineyard in Oakville. Ripe and smooth for a Sangiovese, the 2000 is dark inky color but starting to show a tinge of rust and brown edges at this stage of life. Medium bodied, it still presents pretty, ripe cherry and blackberry fruit flavors at its core highlighted by a layer of herb and anise notes and touch of leather and tobacco. It has a flavorful lush long finish.
RM 90 points.

Posted by UnwindWine at 9:02 AM No comments: