Big Zinfandels and Shiraz with BBQ kick off summer

Big Zinfandels and Shiraz and barbecue kick off summer

For a Memorial Day summer kick off barbecue Bill and Beth prepared rubbed apple smoked and wet BBQ ribs. And what goes with barbecue? Zinfandel, of course, as well as big hearty Shiraz/Syrah, which oft-times manifests itself in southern Rhones blends from Chateauneuf-du-Pape or lesser appellations (which will  provide great QPR - quality price ratio), Gigondas, or Vayqueras. Of course the Aussie's have their's with 'Barbie'. So, to accompany this hearty barbecue we hoisted big zesty Napa Valley Zinfandels and a pair of big bold Barossa Valley Shiraz's. 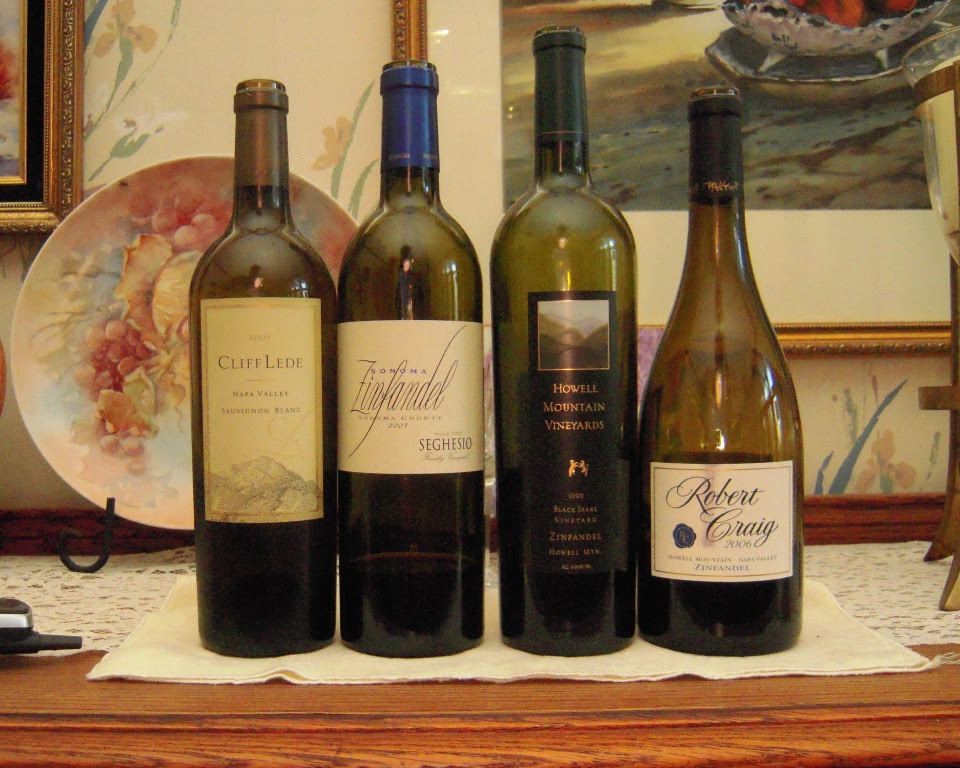 From Robert Craig, the legendary producer known for his family of Cabernets from 'three mountains and a valley' comes this big Zinfandel.  This full throttled Zinfandel fruit is sourced from the Black Sears Ranch Vineyard at the end of the road high atop Howell Mountain. We tasted and obtained this big bruiser Zin during a winery visit up on Howell Mountain during our Napa Valley Wine Experience 2008, (shown below left). 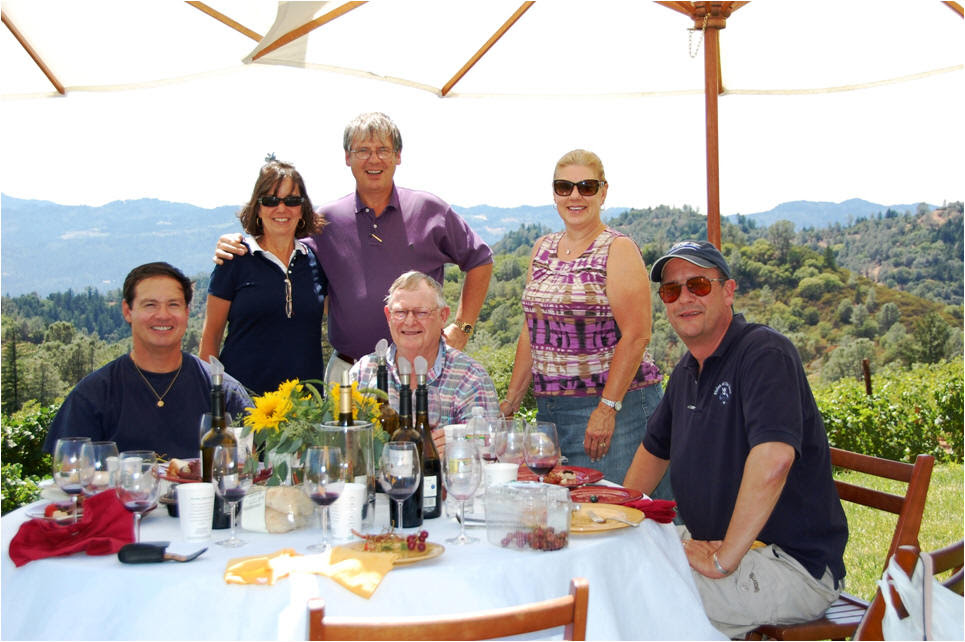 I first discovered Howell Mountain Zinfandel fruit with the Howell Mountain Black Sears Vineyard Zinfandel 1999.  This was was served at a gala state dinner back in 2008 that I had the privilege to attend at the Taiwanese Twin Oaks Estates mansion and Consulate in WDC, just down the hill behind the Washington Cathedral - formerly the estate home of Alexander Graham Bell's descendents. Not until our Robert Craig visit did I learn that the fruit for this wine was sourced from a vineyard near Robert Craig's Howell Mountain property. We conducted a comparison tasting of these two wines back in 2009 (shown top left).

This time this wine presented itself as heavy, full bodied, concentrated and focused black pepper predominates overpowering the black fruits. Could this be the same Zin we tasted earlier where the black pepper was just a modifier? The black pepper was amazingly intense and forward only begrudgingly giving way to tones of blackberry fruits and bramble. Thick full bodied, almost chewy. Dark garnet color with a brownish tone. 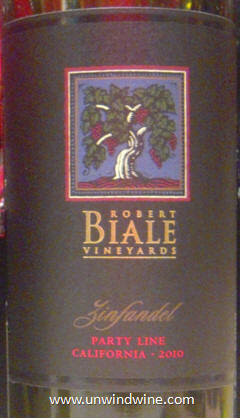 Robert Biale Vineyards is a historic legendary Napa Valley producer dating back back to when Aldo Biale immigrated from Northern Italy settled and began growing grapes in the 1930’s. He planted Zinfandel which was widely planted by immigrants throughout the state’s history as a highly flavorful red grape well-suited for its expansive range of arid climates and diverse soils. His inaugural production of 400 cases was produced from 8 acres of old non-irrigated low-yielding vines called “Aldo’s Vineyard.”
In 1991, Aldo Biale and son Robert partnered with marketer Dave Pramuk to focus on producing world-class wine from the oldest Zinfandel vines on the Biale ranch in Napa’s Oak Knoll District.

While Zinfandel is ideally suited to the area, it comprises only 2% of Napa Valley’s grapes. Biale consider their Zinfandel to be an ideal expression of California and the sites where it is grown. They contend that Zinfandel shows distinct differences in character from site to site like no other grape variety and the fact that the old vines themselves are deeply rooted in original vineyards make them among the greatest expressions of terroir in the world. Their intensive hand-farming, extreme thinning and careful selection of only the fully ripe “black” clusters make for very small yields per vine and give their Zinfandels their distinct personalities and rich, hedonistic style.
In the 1940’s Aldo Biale sold bottles of illicit homemade Zinfandel known as “Black Chickens” over his party line phone service. This wine commemorates and is named for Aldo Biale's taking orders on the local party line, this Biale 'Party Line' Zin is a blend selected from the family's Zin vineyards across Napa.

A neighbor of Robert Craig high atop Howell Mountain, just across the road from  Lamborn Vineyards, one passes Outpost on the way to the end of road to the Craig estate. We visited these producers during our Napa Valley Wine Experience in 2008. All are known for their Cabernets but they all also produce Howell Mountain Zinfandels. It just occurred to me I could've also brought a Lamborn Howell Mountain Zinfandel for a true neighborhood tasting for this event.

Compared to the big concentrated Robert Craig Zinfandel, the Outpost actually came across as smooth, polished and medium-full  bodied. It certainly was more approachable than the full-throttle powerful Craig, which was the favorite of Linda. The Outpost was dark ruby colored, medium-full bodied, nicely balanced, smooth and polished with brambly black fruits, a layer of white pepper and hints of vanilla on the finish.

This classic Shiraz was the discovery of the Wine Spectator Grand Tour Chicago 2010 where we met the producer, orchestrated procurement and cornered the Midwest market obtaining all nine cases allocated and shipped here. These were divided amongst our OTBN team Bill, Dan, Eric and Ernie and me.

Bill C's notes tasting notes from the dinner: 'Still big, round and delicious. Deep inky purple in the glass. Fruit forward, layered with soft, integrated tannins. Maybe the best Shiraz I have had. This is softening somewhat and I will not hold remaining bottles for more than another 3 years. Drinking exceptionally well.'

Another full throttle shiraz from Barossa Valley, this 2002 is still big bold and fruit filled at thirteen years of age. I love this style of tongue coating rich concentrated complex fruit accented with a bit of vanilla and spice. We drank ours  a few years ago but this was still vibrant.

Bill's notes on this wine as posted on Cellartracker:

"Medium garnet in color. Fruit has faded somewhat but has been replaced with some layers of minerality, coffee and cola. Still a bit of blackberry on the finish. Should drink now."

Posted by UnwindWine at 10:21 AM No comments: Links to this post