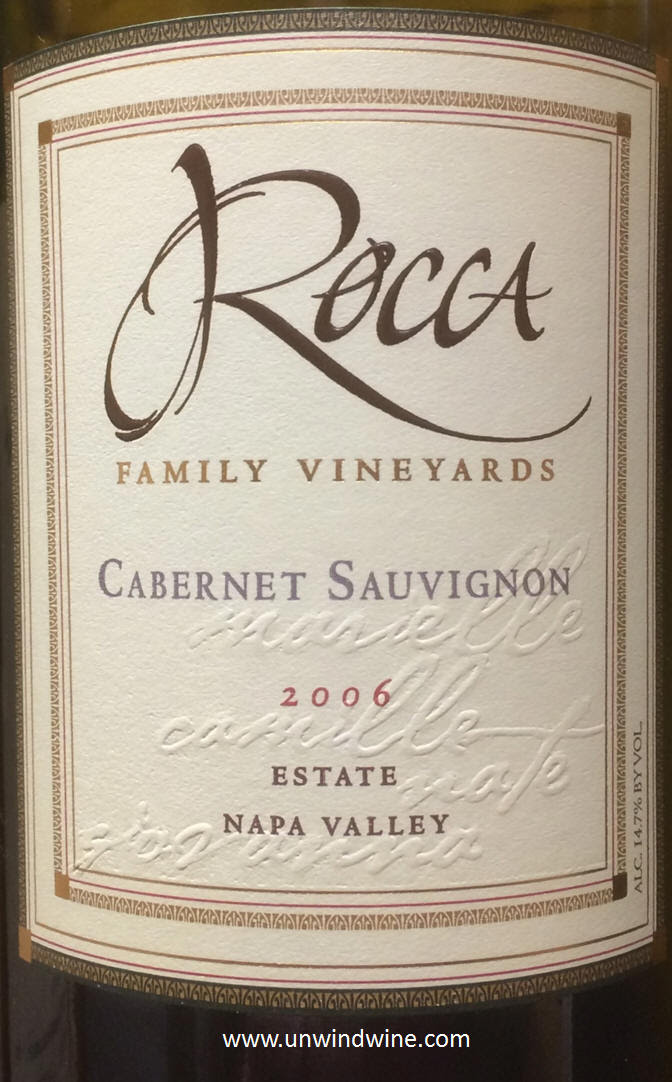 As written in my blog earlier this week, after depleting my stock of the Marilyn Sauvignon Blonde, I stopped at Sav-Way Liquors in Hinsdale to pick up their remaining bottles. Based on the wines I was browsing, they suggested I try this Napa Cab, an unknown label which was a special buy, which according to them was on offer at half price, marked down from $80 to $40.

Upon further research, this is the product of emerging producer, vineyard proprietors, Mary Rocca and Eric Grigsby. Mary a cosmetic dentist, and Eric a nationally known pain management physician, are producing wines from two vineyard sites in lower Napa. I was not aware of this wine so we tried it tonight, after a Friday evening movie out, with a variety of cheeses, some leftover tenderloin steak from last weekend's wine and dine dinner, and fresh apple slices.

Rocca and Grigsby pursued their dream to produce world class wines when they purchased their first Napa Valley vineyard in 1999. They have the twenty-one acre Grigsby vineyard in Yountville, and the eleven acre Collinetta Vineyard located in Coombsville, Napa Valley's newest sub-appellation east of downtown Napa. Collinetta is Italian for “little hill,” named for the topology of the site. Mary now devotes her time to the vineyard project with winemaking duties tasked to consulting winemaker Paul Colantuoni.

The vineyards are planted in Bordeaux varietals centered on Cabernet Sauvignon, and some Syrah. Their early releases have earned them accolades as a top emerging Cabernet producer. The Grigsby Vineyard 2002 Cabernet Sauvignon came in #1 in a blind tasting of 12 Rising Star Cabernets at the Vintners Club tasting in the U.S. That wine was cited #1 from a group of 12 Cabernets shown in France's 12 Best Cabernets from California.

Watch for more from this producer as they increase production over the next couple years. Rocca release only about a third of their fruit under their own label, selling the rest to other Napa producers.  For the 2009 vintage, their production was 2,200 cases across a portfolio of six wines. That output is expected to increase to 5,000 cases by 2019.

This was dark blackish Ruby colored, full bodied, complex dark berry fruits that were overtaken by smoky creosote and tree bark flavors, with layers of spicy oak, expresso, and hints of dark chocolate with full tannins on a lingering finish. The seven reviews on Cellartracker are unanimous with a 92 point score. I ranked it a slighty lower 91 points due to the fruit being overtaken by the smokey tar non fruit flavors. It will be interesting to see how this is tomorrow, and to see if the fruit emerges in a couple more years as it settles down and balances out.

According to the producer, this is sourced from Estate vineyards, 95% Yountville and 5% from their Hillside Vineyard.