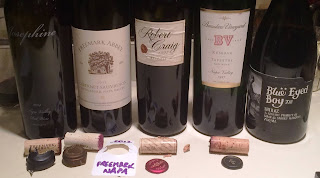 For a wine dinner at Bill and Beth C's, Beth prepared a fabulous Beef Wellington, so Bill and I pulled together a selection of some our favorite Napa Valley Bordeaux blend wines, mainstays of our cellar collections, for the occasion. The rationale being that complex blends will result in complex wines that will complement the cuisine, rather than a narrower, 'single dimension' wine that may tend to overshadow or even overpower the food. Such wines have their place, but not for fine dining. Bill served two Freemark Abbey Napa Cabernets - the Estate and the allocated limited release Josephine. 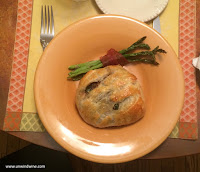 After a selection of artisan cheeses and biscuits, we dined on Beth's delicious Beef Wellington (right) with asparagus spears wrapped in bacon, and a spinach, egg and bacon dinner salad.

This is the flagship of the storied Freemark Abbey, named for Josephine Tychson, who in 1886 established the original winery along Route 29 just north of downtown St. Helena where Freemark Abbey still stands, becoming one of the first woman winegrowers on record.

Bill acquired this limited release allocated wine from the producer and holds a vertical selection of this as part of his extensive Freemark Abbey collection. We have visited the winery on numerous occasions including our visit there together during our Napa Wine Experience back in 2009.

Bill's tasting notes from Cellartracker for this selection sum up our tasting experience perfectly - "Despite having tasted and collected most of Ted Edwards cabs going back to the 1980's, this was the first time tasting his effort at a Bordeaux blend. I chose this specifically because Beth had chosen to prepare Beef Wellington for a dinner with friends Rick and Linda. It was worth the wait. Beautiful, dark ruby color. A slight perfume on the nose with a small hint of herbs. Complex layers of raspberry, cassis, chocolate and unsurprisingly, Rutherford dust. This was a spectacular accompaniment to the meal and to the '97 Affinity and Tapestry provided by Rick and Linda. A word of advice...it took a full three hours plus for this to truly reveal its full complexity. Prior to that time, this was a bit flat, missing the upper end brightness of the fruit. But with the appropriate time, this was pretty spectacular."

This is a blockbuster release from Freemark, being a high achiever of the 2012 vintage. Wine Advocate awarded this 93 points. A blend of Bordeaux varietals, 75% Cabernet Sauvignon along with Merlot, Cabernet Franc, Petit Verdot and Malbec. This is an obvious collectable with its high QPR (quality price ratio) and abundant availability with 45000 cases produced. I look forward to watching this progress over the next decade, although Parker predicts this might be progress over the next couple of decades.

The 2012 really lives up to Parker's high praise even at this young age. Rich, robust and full of fruit. Cherry and red raspberry on the front palate with mocha and a layer of oaky vanilla on a full bodied finish. Strongly advise letting this breathe for a minimum of two hours. There are early, youthful tannins present but my sense is that this is not a 20 year wine. But why wait. Will be out to purchase more today.

One of the remaining bottles of a case acquired upon release, my tasting journal index shows eleven previous tasting notes published for this wine.

Dark garnet colored, starting to show some rust orange hues and slight bricking on the edges showing some diminution from aging, medium-full bodied, an initial funkiness burned off soon after opening eventually showing and drinking fine,  like when younger.

Black berry and black cherry fruits, slight earthy leather, licorice and a tone of bark on the moderate tannin finish. Opened further and softened more over the course of the evening. 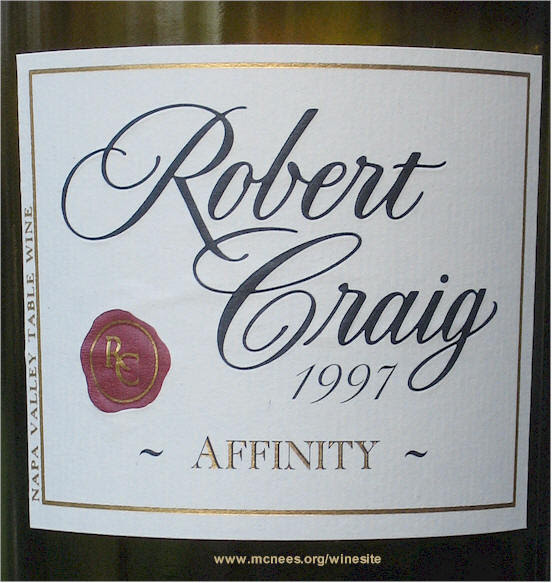 Robert Craig is one of the largest holdings in our cellar with a half dozen different labels going back as much as two decades for some. We've enjoyed many special visits to the winery, release parties, and special events with the producer.

Like the Tapestry above, we have a long history with this wine and still hold more than a dozen vintages including early releases dating back to the inaugural in 1993. Like the '97 Tapestry, this is one of few remaining bottles of a case we acquired back upon release. Our wine tasting journal index for this wine shows eight tasting notes over the years.

This too, is a Bordeaux style blend and also paired well, still showing vibrancy and resiliency at this stage of life. My last tasting notes for this wine a year ago said that while it most likely will not improve further with age, it seems to still stand at the apex of its drinking window and shows no sign of diminution whatsoever.

Tonight,  like the Tapestry, this bottle also showed a bit of funkiness on opening which also burned off within the first half hour.

My previous tasting notes back in 2012 cited 'this wine is more expressive than early in life showing lingering fruit and staying power'. According to those notes, this showed even better tonight with more balance and polish than that tasting. At this stage of life, that could be an indication of bottle variation but no so likely since the bottles share the same provenance. 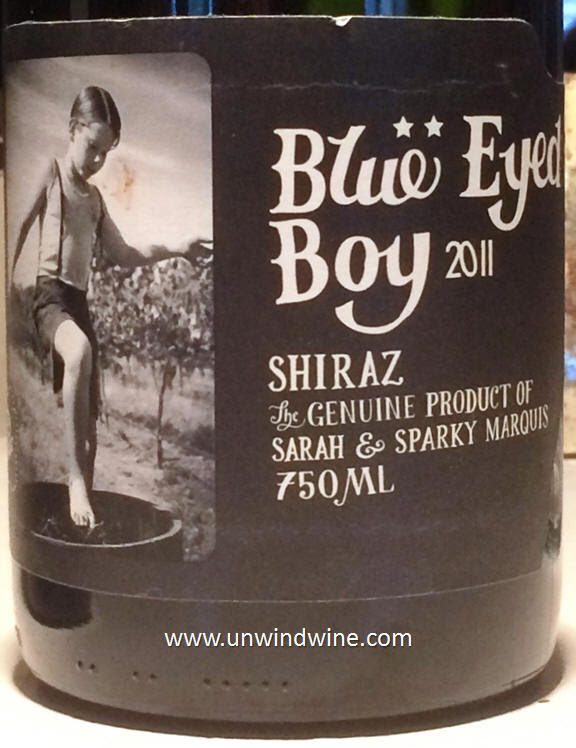 From the top ranked wine team of Sarah and Sparky Marquis, their new Mollydooker label plays on the Australian colloquialism for a 'left hander'.

Bill pulled this initially to add to Beth's wine infused brown sauce for the Beef Wellington and then poured it as a perfect accompaniment to Linda's cake dessert. Weighing in at 16% alcohol, this is a bold wine that begs for big full flavorful foods such as sweet dessert or hearty cheese, not for the feint of heart, this can be an after dinner aperitif.

Posted by UnwindWine at 12:30 PM No comments: