Vineyard Wedding and Wine in Michigan 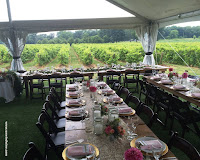 Friends Dave and Marie's daughter Jacki wanted a wedding amidst the vines of a vineyard. The thought of a vineyard wedding prompts thoughts of a destination wedding in Tuscany, Provence or Sonoma. But with a lake home on the Michigan shores in southwestern Michigan wine country, this was not a far-fetched idea for them.

About two hours from Chicago is a burgeoning wine producing region the Lake Michigan Shore Wine Country, an designated AVA - American Viticultural Area. Starting at the Indiana border, it reaches across the southwestern corner of Michigan north to the Kalamazoo River and east toward the City of Kalamazoo. 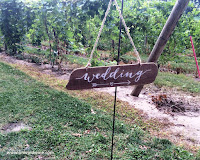 Those of us that live near the Great Lakes are familiar with 'Lake effect' weather - more moderate near the Lake - cooler in the summer, warmer in the winter. Those along the eastern shores of the Great Lakes are affected even more profoundly by snows that are produced by the more moderate lake warmed air crossing the lake and picking up moisture to be deposited as it is sharply cooled on landfall. We've all seen the news footage of highly localized snowbelts that measure their snowfall in feet rather than inches.

These more temperate climates with moderated extremes of heat and cold, also protect the varietal grape vine's fragile buds in spring and ripening fruits in summer. The deep, lake-effect snows insulate the rich soil so the vine roots don’t freeze, and the consistent annual rainfall enables the production of clusters of grapes for producing abundant wines. And the soil is sand for optimal maximum drainage to starve the vines to produce intense fruits. 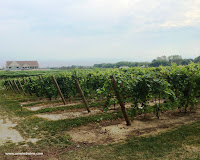 About one-third of the production is Hybrid varieties - crosses between the European vinifera varieties and grapes native to North America, such as Vidal, Chambourcin, Marechal Foch and Vignoles.

So, last weekend we attended Jacki and Chris' wedding and sipped on local Michigan wines. Being the wine snob that I am, I've been known to say there are no appealing Michigan wines. Previous experiences of Michigan Bordeaux varietal based wines were 'grassy' and 'woody' with musty subdued fruit. This weekend we tasted and toasted not only respectable tasty wines, but wines of European Bordeaux varietals that here-to-for unremarkable, showed nice somewhat complex yet approachable fruits with balanced fruit, moderate acid and tannins. 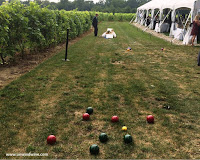 In fact, the local Cabernet Sauvignon served was a great accompaniment to the grilled steak, and the Chardonnay to the salmon filets.

The story book setting amongst the vines on the temperate summer evening could've been in Sonoma, Provence or Tuscany! Bocci balls aside!

Dark garnet colored, medium bodied, black berry and currant fruits with tones of smoke, hints of earthy leather and all spice on a moderate tannin finish.

Michigan has 15,000 acres of vineyards making Michigan the fourth largest grape-growing state.
Wineries are popular tourist destinations, attracting more than 2 million visitors annually.
The wine industry contributes $300 million annually to Michigan's economy.
Three types of grapes are used for wine in Michigan:
Most of Michigan's quality wine grapes grow within 25 miles of Lake Michigan. Here, the "lake effect" protects the vines with snow in winter, retards bud break in spring helping avoid frost damage, and extends the growing season by up to four weeks.
Michigan has four federally approved viticultural areas (AVAs). In the northwest part of the state, near Traverse City, lie the Leelanau Peninsula and the Old Mission Peninsula. This area has a growing season averaging 145 days and an average heat accumulation of 2,350 growing degree days; 51% of Michigan's wine grapes grow here. In the southwest part of the state lie the Lake Michigan Shore and Fennville appellations, where 45% of Michigan's wine grapes are grown. This area has a growing season averaging 160 days and an average heat accumulation of 2,750 growing degree days. Both are Region 6 on the USDA plant hardiness zone map.
Harvest begins for early hybrid varieties at the end of August in the southwest and may extend into November for late-ripening vinifera varieties in the northwest.
Increasingly, Michigan wines are receiving high honors at national and international competitions. In addition, the Michigan Wine and Spirits Competition provides for head-to-head comparisons of the best of Michigan. Results are posted online following each year's competition.
Michigan wineries make many styles of wine, from dry to sweet including Ice Wine, sparkling, fortified, fruit wines and eau-de-vie (fruit brandy).
Michigan wines are typically "cool climate" - clean, crisp, balanced wines that exhibit real varietal character
- See more at: http://www.michiganwines.com/fast-facts#sthash.SgElcqLG.dpuf
Posted by UnwindWine at 9:44 PM No comments: Links to this post