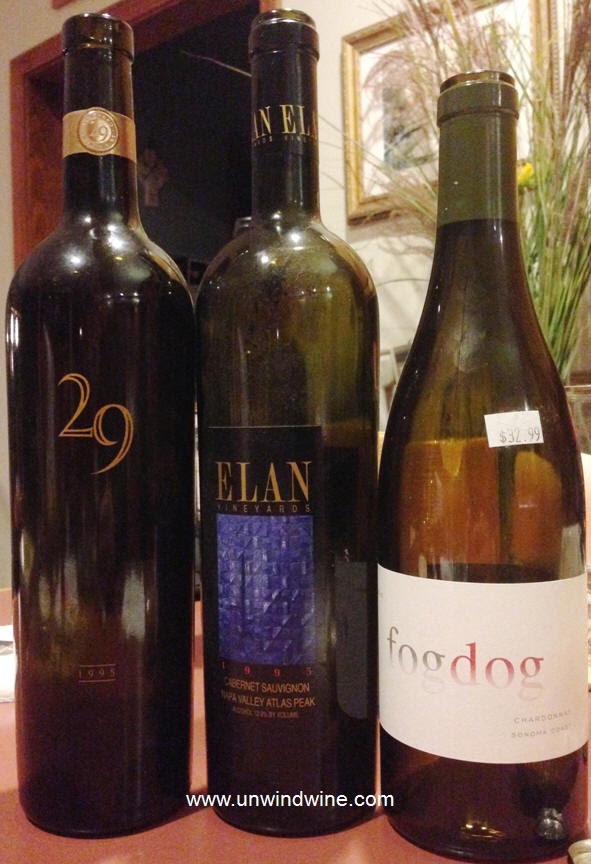 For a beef tenderloin wine dinner with friends Beth and Bill C, I suggested a (Napa) Cabernet theme following our Shiraz and Bordeaux dinners during last weekend's NYC getaway.

Bill brought a 1995 Vineyard 29 Napa Cabernet. Bill brought this same property's Grace Vineyard label from the '93 vintage to our OTBN 2013 (Open That Bottle Night) dinner and it was one of my favorites of that evening that featured more than thirty wines.

For a comparison mini-horizontal tasting, I pulled a 1995 Elan from the cellar. This provided an interesting contrast in styles and terroir of two wines showing the same state of their aging profile.

At eighteen years of age these two wines are reaching the end of their drinking window and both, while showing their age, are still drinking well.

The two aged Napa Cabernets were a perfect complement to Linda'a beef tenderloin, green beans and wild rice dinner, as well as the chocolate mousse and selection of artisan cheeses. Prior to dinner we drank Joseph Phelp's Sonoma County Fogdog Chardonnay 2010 with lobster medallions and artisan cheeses. 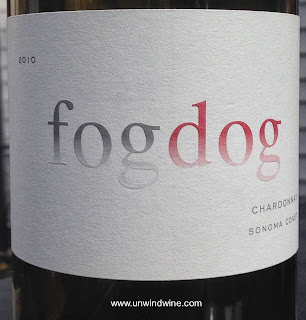 This is an interesting whimsical label from the legendary Joseph Phelps known for Bordeaux varietal wines from Napa Valley. Yet Phelps loved the wines of Burgundy and wanted to craft wines in that style. Originally he sourced Chardonnay from St. Helena, then Yountville and later from Carneros.

Through the years, he continued searching for the ideal spot to grow both Chardonnay and Pinot Noir. He found the perfect combination of climate, soil and location in Freestone, in the Sonoma Coast appellation AVA, just five miles from the Pacific Ocean. In 1999, Joseph Phelps Vineyards began developing 100 acres of vineyards just outside of Freestone.

In 2005, he built a new winery which was completed in time for the 2007 harvest. Today, 80 acres of Pinot Noir and 20 acres of Chardonnay produce remarkable estate-grown wines bearing the Joseph Phelps name.

The moniker 'fogdog' refers to 'a bright or clear spot that appears in the breaking fog'. Being just five miles from the coast, the fog rolls in from the ocean and graces the vineyards early in the day before being burned off by the late morning sun.

We've had the Fogdog Pinot Noir on several occasions, most recently during last weekend during our New York/Hoboken getaway, but this was our first encounter with the Chardonnay.


Winemaker Notes: This wine has a very expressive floral bouquet with notes of baking spices, wet stone and toasted vanilla bean. There is a hint of mid-palate sweetness that nicely buffers the core of acidity and complements the array of pear tart, white peach, green apple and lemongrass flavors.
Sonoma Coast Chardonnay sourced from the Dutton Ranch Mill Station Vineyard (67%) and the Freestone estate vineyards (33%).
The 2010 Chardonnay growing season was slow and cool, producing excellent fruit quality with uniform sugar and acid levels, despite the late season weather challenges, making for excellent natural winemaking conditions. The finished wines are balanced and fresh with a distinctly Freestone spice element.

Vineyard 29 derived its name from the estate's physical address, located at 2929 Highway 29, just north of the town of St. Helena. The estate is located on the eastern-facing slope of the Mayacamas mountains that form the western boundary of Napa Valley. The property has had several owners over the last two decades. During the 1995 vintage year it was owned by Tom Paine and Teresa Norton who were partners in the international human resource consulting firm, Hewitt and Associates. They purchased the 28-acre property (not 29?) in St. Helena in 1988 and moved there in 1989.

They hired David Abreu as vineyard manager, a third generation rancher in St. Helena, a graduate in viticulture and enology from University of California at Davis, and founder of Abreu Vineyards and David Abreu Vineyard Mangement.

David planted the Grace Family vineyard with the Bosche clone of Cabernet Sauvignon in the Bordeaux style, with five feet between rows and four feet between plants, resulting in about 2,000 vines per acre as opposed to the 500-600 vines found in most vineyards. By 1993, Vineyard 29 was comprised of four acres and more than 8,000 vines. Vineyard 29 was in partnership with Grace Family Vineyard until 1998, using their facilities. Dick Grace hired Heidi Peterson Barrett of Dalla Valle and Screaming Eagle fame in 1995 and she also made the Vineyard 29 wine until 1998.

After nearly a decade of producing highly acclaimed vintages, Tom and Teresa sold the property in 2000 to Chuck and Anne McMinn, who constructed a state-of-the-art, gravity-flow winery and cellars on the property.

Vineyard 29 produces classic, rich, concentrated Cabernet Sauvignon, attributable and distinctive to its terrior of its eastern-facing slope where the grapes receive the most direct sunlight during the early morning hours when the heat is less intense. Afternoon sunlight falls indirectly on the vineyard, allowing for slightly cooler afternoon exposure. This pattern of exposure is ideal as the grapes can ripen with well-structured tannins. The slope ensures perfect drainage, creating the perfect amount of vine stress to yield highly concentrated fruit. In addition, the close spacing, a more expensive way to farm, stresses the vines so the yield is lower and the grapes more intense. The wine was aged in 100% new oak.

This wine is dark ruby colored, medium bodied, elegant with good depth, concentrated vibrant expressive spicy black cherry and black berry fruits with a layer of leather, cassis, oak and cigar box that likely have come on and are indications of its age, with smooth nicely integrated fine-grained tannins on a long flavorful finish.

We first tasted and picked up this wine from the producers Richard & Linda Elliott-Smith during our 1998 Napa Wine Experience. We're getting towards the end of a case we acquiered back then.
During our  Napa Cab 95 Vintage Horizontal Tasting back in August, of the five eighteen year old '95 Napa Cab's tasted, this was the one showed the most diminution from age. I think its Bordeaux style renders more earthiness and leather with more muted fruits.
Full bodied, with firm but well integrated tannins, the black berry and black cherry fruits are falling off a bit and giving way to tones of leather and tobacco, accented by anise, cedar and oak.
RM 89 points.
https://www.cellartracker.com/wine.asp?iWine=72763

Posted by UnwindWine at 11:11 PM No comments: Links to this post