Anyone thinking Sonoma Cabs are a step down from the king of cabs, Napa, haven't had Arrowood Sonoma Cabernet Sauvignons. We've been fans of this Arrowood Cab for a long time and have selections in our cellar dating back to the 1991 vintage. This 2008 release is another in the series of fruit forward, flavorful wines and is as good as any in memory.

I was a bit dubious when I picked this up at Wine Discount Center for under $25. The label was redesigned and gone was the long standing yellow-gold foil top, replaced by one burgundy colored but still bearing the Arrowood logo on the crown.

Furthermore, I noted that this label cites Sonoma County versus Sonoma Valley as the source of fruit, meaning they've reached beyond the Vally to outskirts north in Sonoma County. Unlike Napa Valley where most of its appellations are in the valley bowl or in the mountain districts that overlook the valley from both sides, adjoining Sonoma Valley, straddling Napa on the opposite western slope of the Mayacamas Range, has several appellations in the Sonoma County up north and reaching all the way out to the Pacific Coast. A view of my Arrowood label library shows this is typically County but shifted to Valley in the 2007 release.

These upper reaches of Sonoma have much more varied topographies and climates as they reach north and to the west to approach the coast. This provides for much more variation and different characteristics in the fruit due to distinctively different 'terrior'. Indeed, some such appellations such as Sonoma Coast are known for Pinot Noir rather  than Cabernet Sauvignon based on its suitability to such a different grape varietal.

The point is that Cabernets from the northern and western Sonoma appellations will vary widely with softer, less structure and lower tannins due to the cooler climes. They produce fine wines, just ones with a different profile. An prime example of such differences can be seen in the wildly popular Silver Oak brand with its Napa Valley and Alexander Valley labelings. Hence I was cautious in approaching this Sonoma County Cabernet, wondering if perhaps it was a 'lesser' offering than the traditional Sonoma Valley release.

This confusion or wonderment is exacerbated by the fact that the Arrowood website features only its single vineyard designated wines and its Cabernet Sauvignon, Réserve Spéciale  wines from the 2005 and 2006 vintages. They cite on their website, "The 2007 vintage was one of exceptional quality. We were so impressed we decided to single out small lots of four Sonoma Valley vineyards and show them off on their own. Available in limited quantities are Arrowood vineyard designate Cabernet Sauvignon's from Lasseter Vineyards, Smothers-Remick Ridge Vineyards, and Murray Ranch Vineyard. We invite you to indulge in the nuances of these individual Cabernet's from some of Sonoma's finest vineyards." There is no mention of the 2008 vintage release on their website whatsoever.

Lastly,  the mystery deepens as Arrowood Cabernet has disappeared from the shelves of Chicagoland wine superstore Binny's, our usual merchant due to their broad and deep offering at discount prices, and vast number of locations as they have expanded dramatically in recent years. They show it as 'discontinued' meaning its no longer offered by their distributor. Never-the-less, it is available at Wine Disccount Center for the bargain price under $24. In the past we have paid as much as $35-40 and sometimes up to $45 for 'this' wine.

I believe the variation in labeling may be due to the fact that  they source their fruits from varied lots in the Valley and up in the County, and determine which go into the mix with each release according to what that year's harvest yields as they might have done in 2007? This is a common practice with all producers - although many carry multiple labels for the different offerings - see Mondavi, Beringer and Sterling where I explain these variations, as examples. Then this is coupled with a simple re-design of the label and change in foil for this 2008 release?

In any event, this wine did not disappoint and was a wonderful pop and pour drinker - especially at this reduced price-point! I'll keep you posted as this unfolds further.

We enjoyed this wine with Alec and Sean at Angeli's Italian - our favorite local Naperville Italian Trattoria. 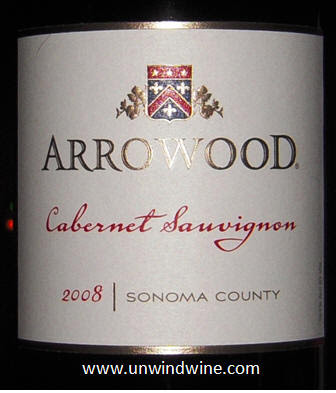 We've enjoyed visiting the Arrowood Vineyards & Winery sitting in the rolling hills overlooking the serene valley on several of our Sonoma Valley visits. Its one of the highlights wine destinations when visiting the valley.

This wine was medium-full bodied, dark garnet/purple color, this Cabernet is very expressive with full forward rich aromas and flavors of layers of spicy fruits - raspberry, ripe currant and black cherries with a layer of cola and hints of sweet oak, tobacco and chocolate in the background with lingering soft round tannins on the smooth finish.

Arrowood cabernet continues to be a high achiever at a reasonable price resulting a great value high QPR at around $25.


Notably, this wine has a very similar profile and was reviewed very much like the 2007 which I reviewed in these pages last spring - see http://unwindwine.blogspot.com/2012/03/arrowood-sonoma-valley-cabernet.html.