In the Southern Rhone River Valley in South Central France sits Château de Beaucastel, located north of Avignon, five kilometres south-east of Orange at the northern limit of the Châteauneuf du Pape appellation. Coudoulet de Beaucastel is known as 'Baby Beaucastel', the second wine of this storied producer to the flagship Chateau Beaucastel, one of the premier producers in the historic Chateauneuf-du-Pape, known for age-worthy big bold complex wines. We visited Beaucastel during our Rhone Wine Experience in 1999.
Coudoulet fruit is grown in a 15 acre vineyard that lies to the east of Beaucastel on the other side of the A7 autoroute. The geology of the soil at Beaucastel and Coudoulet are composed of a layer of marine limestone, rounded stones (or "galets") that contribute much to the wines of Beaucastel as they retain the intense heat of the Mediterranean sun during the day then slowly disperse it to the vines during the night. This provides a head start to the vines in springtime. The long dry Mediterranean summers often can stress the vineyard for lack of water resulting in intense powerful fruit. The resistance built into Beaucastel's vine stock from 30 years of continuous organic culture allows the vineyard to come through periods of drought with few problems. Because the rocky soil is porous and aerated, the vineyards at Beaucastel have developed root systems that penetrate deep into the rocky earth in their search for water. 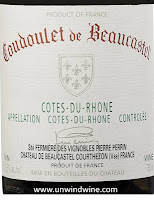 As shown above, the vines in the Southern Rhone are cut low to the ground to protect them from the mistral winds that rush up the river valley from the Mediterranean during the winter.

Coudoulet and Beaucastel are age-worthy wines due to the high proportion (up to 30%) of Mourvedre, a grape that provides a tannic backbone and resistance to oxidation that ensures long life. Mourvedre introduces aromas of leather, tobacco, and spice to the blend. Beaucastel and Coudoulet vineyards are at the northern edge of the growing region of Mourvedre. It it often considered that the best expressions of a varietal come from the cooler parts of their growing areas.

The other primary varietal in Beaucastel wines is Grenache which gives Coudoulet the rounded fullness and intense fruit that is typical of Côtes du Rhône. The remainder of the blend is equal parts Syrah and Cinsault representing about 20% each, that provide tannins and aromatic complexity to Coudoulet.

Chateauneuf-du-Pape appellation covenants allow up to thirteen different varietals in the blend resulting in complex and often very sophisticated wines. Côtes du Rhône wines from the adjacent appellation are relatively simpler and generally more affordable offering high QPR - Quality to Price ratios compared to their bigger more complex neighbors. This is also the case with Coudoulet being a fraction of the price of its big brother Chateau de Beaucastel.
We met Ryan and Michelle at BYOB Irazu Restaurant in tony Bucktown about six blocks from their place and they brought along this Coudoulet de Beaucastel Côtes du Rhône Red 2009.
Deep ruby purple color, medium.full bodied - very ripe, bold, forward, expressive structured, jammy and dry with aromas and flavors of black cherry and blackberry fruits, herb, grilled meat, leather with hints of pepper and spice with a mineral layer on the lingering moderate tannin finish.

We brought along one of favorite big Syrahs, Flinders Run. We love this wine and consider it a benchmark representation of Southern Australian Shiraz at its very best, and at a pricepoint between $25-30 it offers relative great QPR.

My earlier tasting notes from last year; "Dark garnet color - full bodied. Mouthful of forward chewy spicy ripe plum blackberry, blueberry and notes of licorice coat the tongue, toasty oak and a layer of vanilla almond on the full long, pure finish. Slight heat and mineral edge is subsiding but detracts from the fruit a bit. Not quite as smooth as the 2005 vintage but delicious none-the-less".

As good as this wine is, we like the 2005 even better! These wines are big and forward and might be 'over-the-top' for the more timid!

Stephen Lagier and Carole Meredith produce the Lagier-Meredith label Syrah based Rhone style wines from their mountain top estate high above Yountville on Mt Veeder in Napa Valley. As we are such huge fans of Syrah and Shiraz, I always wondered about the differences in the various Syrah/Shiraz varietals from the old world (France) and the new world (Australia and the US). I found the answer during our visit to Lagier-Meredith Vineyards in Napa Valley during our Napa Valley Mt Veeder tour last spring.

Carole Meredith was a professor in the Department of Viticulture and Enology at the University of California at Davis where she conducted research in grape genetics. Her research group used DNA typing methods to discover the origins of some of the greatest old wine varieties, including Cabernet Sauvignon, Chardonnay, Zinfandel and Syrah. Carol Meredith is a geneticist and has studied and specializes in the Syrah varietal. She attests the Syrahs from Australia and Napa are the same as their ancestors from the old world Rhone River valley where they have been grown since the 16th Century. Lagier-Meredith produce Syrah varietal wines that are true to their heritage as they strive to produce wines in the traditional Rhone style.

Posted by UnwindWine at 9:44 PM No comments: