We hold a over a decade of vintages of this label. mostly acquired at auction until recent vintages which have appeared at certain Chicagoland merchants. We've also discovered and enjoyed their Trutina label which is a Bordeaux Blend, which at a reduced price point offers good QPR - Quality Price Ratio.

Dunham are a family-owned winery with several estate vineyards in prime locations around the Walla Walla Valley Appellation. Dunham grow and produce varietal based wines in Cabernet Sauvignon, Syrah, and Chardonnay as well as Trutina, their Bordeaux style blend. Proprietor Eric Dunham is winemaker and also an artist who creates original artwork that is featured in a series of 'Artist Series' labels for Dunham Cellars vineyard designated and special bottlings.

I pulled this fifteen year old 2000 vintage release to compare with vintage releases of our recent tasting last week. Thankfully, this showed well and is still well within its drinking window showing very little diminution with age. 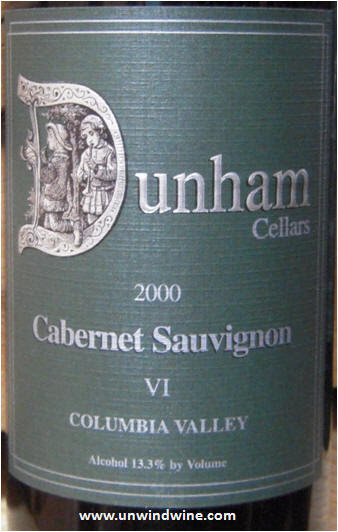 Dunham employ an interesting and unique branding methodology numbering each release of this wine with a Roman Numeral dating back to I with their 1995 release. Hence this 2000, their sixth release is labeled 'VI' for the sixth release.

This is their flagship label which we opened with great interest since we hold a vertical collection going back to their 1997 vintage, which we have not yet tried, so we weren't sure what to expect. This is from the Walla Walla winery with fruit sourced from numerous locations in the Yakima and Columbia Valleys in Central West Washington State - an area not normally associated with Bordeaux varietals. Yet, looking at the geography and latitude, the region is relatively near that of the French Bordeaux region.

Posted by UnwindWine at 8:48 PM No comments: