We dined at Chinn's Fishery Seafood in Lisle (IL) and took BYOB a robust full bodied Nickel & Nickel Chardonnay to pair with the 'Jet Fresh' seafood. Chinn's offer seafood that is flown in daily from the various seaports around the world. They actually post on the wall the bills of lading from the flights from Alaska, Hawaii, Florida, the West Coast and East Coast ports. This provides the freshest specialties; fish, crabs, lobsters, shrimp, scallops and more, flown in fresh daily, bringing in the days' catch at the ports, packed and served within 24 hrs. Stan & Kim Chinn and General Manager, Robert Blaese, have been operating at the Lisle location since 1995. 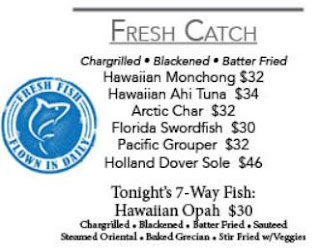 They also feature daily their "7-Way Fish" that can be prepared any one of seven ways: chargrilled, blackened, batter fried, sauteed,  sauteed oriental, baked grecian, and stir-fried with vegetables. Tonight's 7-Way Fish feature was Hawaiian Opah. 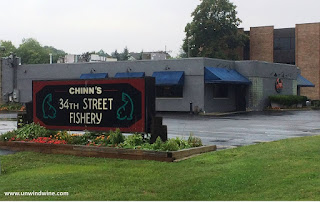 Chinn's was lively and hopping when we arrived for our six o'clock reservation. We were seated promptly. The restaurant was full and most tables turned over and were filled for a second seating as we were leaving. The atmosphere is bright, well lit with a marine motif and atmosphere somewhere between a coffee shop and harborside seaport bar and eatery. I believe it was the best dinner we've had there in the twenty years we've dined there, with the impeccable food, hospitality and service.

They also feature the traditional seafood faire of lobster, crabs, shrimp, mussels and a raw bar of fresh oysters. Steaks and pasta selections are available including a broad surf and turf set of options. Our server Stephanie provided attentive, friendly, knowledgeable and professional service.

I opted for the Holland Dover Sole which was delectable, grilled in lemon white wine butter sauce. Linda had the Crab Cakes, and Sean and Michelle the Daily Special Hawaiian Opah. All were excellent. I featured Dover Sole in these pages recently that I had twice in NYC at an upscale fine-dining establishment. There it was $70 for the entree. Tonight's was better!

To pair with our diverse seafood dinner, we brought from our cellar BYOB Nickle & Nickle Russian River Valley Sonoma County Chardonnay. Big, full bodied and robust, it was a perfect pairing.

We toured the Russian River Valley during our Napa Sonoma Wine Experience 2017 year before last. We stayed on the coast in Bodega Bay and traveled the back roads between there and Santa Rosa to witness and experience the climate and topology that comprises the notable terrior of the area.

This is from the Green Valley AVA in Russian River Valley where, the grapes benefit from a cooling coastal influence that helps them ripen slowly and develop complexity.

From the Green Valley AVA site: "Green Valley is one of the smallest appellations in Sonoma County. It lies in the southwestern part of the Russian River Valley, bounded by the towns of Sebastopol, Forestville and Occidental. It is very tightly delineated, both geographically and climatically, and is the most consistent and distinctive of any North Coast appellation in terms of soil, climate and flavor. The fog is Green Valley’s trademark."


The 2013 vintage was a fantastic growing season in the Russian River, with dry, moderate temperatures and cool foggy mornings

From the winery: "The 2013 Nickel & Nickel Stiling Vineyard Chardonnay is consistent from year to year. Passion fruit and floral aromas offer a mere hint of what’s on the palate: flavors of Muscat and Meyer lemon enhanced by flint and stone. A pleasant oiliness adds suppleness to the mouthfeel, but the vibrant acidity cleanses the palate and adds a succulent quality that makes one eager for another sip."

Linda liked it a lot, classic (over-the-top) California Chardonnay style, I found it a bit much, almost overpowering for my more delicate sole entree.

Posted by UnwindWine at 9:09 AM No comments: Links to this post