Eric and Cathy brought this to our OTBN gala last month. We both discovered and acquired this wine at the vineyard/producer during our Napa Valley Mt Veeder Wine Experience back in 2011.

Godspeed Vineyards is a small production label from this boutique producer. Ironically, I saw some available at Total Wine up in Minnesota just the week prior to my previous tasting back in 2016.

Godspeed is a small production boutique grower on Napa Valley Mount Veeder situated in a remote location to the north end of the vast Mt Veeder appellation up on Mt Veeder Road above the town of Yountville down below.

Goodspeed vineyards, first planted in 1987, possess terroir for growing classic Napa mountain Cabernet Sauvignon, with steep hillsides and mixed sedimentary and volcanic soils. The hillside vineyard sits at an average elevation of 1500 feet above the valley facing predominantly East, Northeast. Temperatures are usually 10-12 degrees cooler than the valley, and the vineyard is generally above the morning fog, giving longer days of sunshine, which normally allows for an earlier harvest.  The vines snake across the hillside slopes producing small clusters of deeply concentrated grapes.

The vineyard is the project of Larry Stricker and his son David. Larry is an acclaimed architect who has created world class resort hotels, including the Phoenician in Scottsdale, Arizona; the Marriott Desert Springs Resort and a series of Hawaiian properties including the Halekulani, Kahala Resort, Kapalua Bay Hotel and the Mauna Lani Bay Hotel.

Since 1990 they kept about half the vineyard production and bottled their own hand crafted wine under under the Godspeed label.

In some years, they also produce a Non-Vintage Late Harvest Chardonnay dessert wine they call "Amen".

The 2013 Sbragia "Godspeed Vineyard" Mt. Veeder Cabernet Sauvignon sold for about $80 and was awarded 94 points by Wine Enthusiast and 93-95 points by Robert Parker's Wine Advocate. 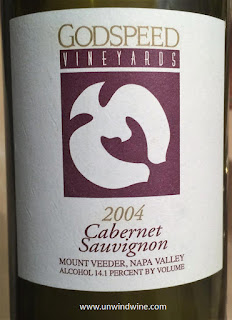 Tonight, Linda prepared for dinner chicken marsala in a brown sauce with brown rice so I pulled this aged Napa Cab as a pairing complement.

My last published tasting note for this label was back in 2016 when I wrote, "This was drinking very nicely in its twelfth year and may be at its prime, not likely to improve further with more aging. This 2004 was the best showing of this label that I have had to my recollection."

This was dark blackish purple/garnet colored, medium-full bodied, aromatic, black berry and black raspberry fruit flavors, a bit tight and firmly structured, the fruits are starting to give way to a predominant tone of licorice, notes of creosote and cedar with hints of truffle, spice  tobacco and green pepper, turning to moderate tannins on the long finish.

In 2012 this was awarded 92 points by Wine & Spirits Guild of America.

Lasted tasted and published at https://unwindwine.blogspot.com/2016/12/godspeed-mt-veeder-cabernet-sauvignon.html.

Posted by UnwindWine at 4:53 PM No comments: 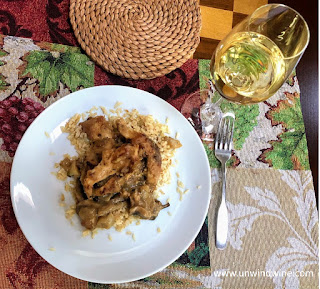 Linda prepared chicken marsala with brown sauce and brown rice to take to a shut in friend and we dined on it as well. To pair with the entree we selected Cliff Lede Napa Valley Sauvignon Blanc.

While we primarily collect and drink Cliff Lede Cabernet Sauvignons, this is perhaps our favorite Sauvignon Blanc and one we keep on hand with each vintage release as one of our mainstay 'go-to' wines. 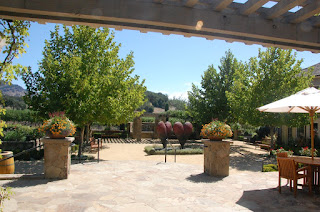 Two other old-vine vineyards, both in Calistoga, contribute to the blend, one planted to Sauvignon Blanc and the other to Sémillon. In many vintages, they also include grapes from a cooler climate vineyard on the east side of Napa, imparting vibrant acidity and finesse to the wine.

A vineyard in Chiles Valley, a small pocket in eastern Napa County, adds complexity with old vines of Sauvignon Vert planted in 1947.

The Cliff Lede winery estate and vineyards with their picturesque sculpture gardens at Yountville Cross Road and Silverado Trail are one of our popular visits during our many trips to Napa Valley. The most memorable was our private tour and tasting during our Napa Wine Experience 2009. 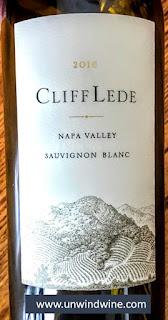 Straw colored, light bodied, aromas of floral and apricot and flavors of peach predominate with tones of lychee, pear, apple, citrus and hints of lime with a crisp clean sharp tangy finish.