Headed downstate again, we planned a stopover in Bloomington, IL for dinner at Ozark House Restaurant. They who were featuring BBQ specials night so we took BYOB this Bodegas El Nido Jumilla Clio 2011. We recently tasted the latest release 2014 which prompted me to go back and taste the 2010 vintage release, so I pulled this 2011 from the cellar for a comparison tasting. Clio was a great accomaniment to the BBQ Chicken, Ribs and Pork Loin features.

We didn't finish the bottle so we held some Clio over which we tasted with grilled filet steaks a couple nights later. The Clio was actually too big, bold and powerful for the beef steaks and we switched to a Napa Cabernet, holding the Clio for some hearty cheese and dark chocolates after dinner. 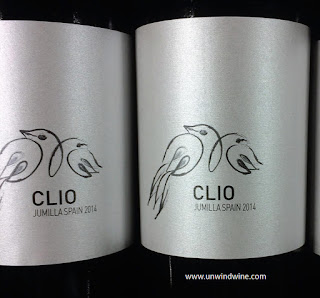 I wrote recently how Clio is the one Spanish wine we collect each year and hold in our cellar in a vertical collection of a series of vintages. It is a consistently high-achieving highly rated wine in a style that we like - big, full bodied, bold, with concentrated forward fruit. It begs for hearty cheeses, spicy pasta, or BBQ so it was an ideal selection to take to Ozark House for BBQ night specials.

This 2011 Clio, like the two other vintages tasted recently is big, full bodied, concentrated forward fruit flavored wine. Consistent with and as noted in my last tasting three years ago, this was dark garnet colored, but it was less polished than some recent vintages with a slight 'tinny' edge, the dark black and red berry fruits give way to cassis, anise, and a layer of expresso with moderate acidity, medium plus tannins and high alcohol on a long full finish.