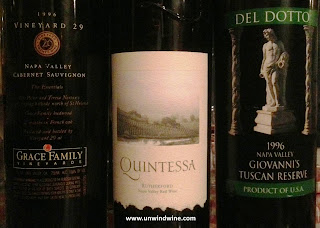 For a weekday dinner outing with friends Bill & Beth C, we each brought a 1996 vintage red for a comparison tasting. We selected 96's to thin the cellar and also to retire a mature vintage that is at or nearing end of its drinking window. Taking advantage of their BYOB policy, we dined at Angeli's Italian, our favorite local Italian ristorante in Naperville, I brought a Del Dotto Giovanni's Tuscan Reserve Napa Red 1996. For a comparison tasting, Bill brought a Grace Family Vineyard 29 Oakville Cabernet Sauvignon 1996. Bill also brought the remains of a vintage selection left over from earlier in the week. He saved and shared a few tastes of Quintessa Napa Valley Red Wine 2005.

We all selected our entrees from the daily specials- Asparagus Ravioli with sun-dried tomatoes, Stuffed Shrimp, Chicken Bruschetta, and Duet of Filets of Beef with Maytag cheese, grilled asparagus and garlic mashed potatoes. We were split on the dinner salad and Angeli's incredible Boston Clam chowder, a house specialty. As always, the food was great, the service personable and the atmosphere congenial and hospitable.

From Del Dotto, featured producer of several of our Napa Valley Wine Experiences, we first tried this '96 back during our '99 producer visit/dinner. Named for Giovanni Del Dotto, son of the producer, this is a Sangiovese blend, a tribute to their ancestral heritage, but not mainstream for this notable Napa Valley Rutherford Cabernet producer.

Interesting, this was a 750 ml bottle, I recall early releases of this wine were in a 500ml format, I remember buying some at the winery and then again at Weimax Wine & Spirits in Burlingame, CA, up the road from SFO.  We still hold a case of this from various vintages. This is our Italian wine component of our cellar since we don't collect or hold many Italian wines, staying with and focusing on Cal Cabs, Bordeaux and Aussie Shiraz.

Inky purple colored, medium bodied, fair amount of sediment in bottle. Slight funkiness on opening, burned off after half hour or so - not unusual for a 17 year old - no other signs of diminution except perhaps fall off in the fruit - time to drink as it is at/near the end of its drinking window. Muted black cherry and black berry flavors are overtaken by a layer creosote, leather and cigar box. Rather tight with moderate tannins on the finish.

Bill brought the 1993 vintage (shown left) of this wine to our OTBN 2013 night and it was one of the highlights of the evening. While not up to the complexity and elegance of the '93, this '96 was drinking very well indeed. From a four acre vineyard '29' planted in Cabernet Sauvignon (2/3) and Cabernet Franc (1/3) on the lower slopes where the Mayacamas Range meets the Napa Valley floor just above St Helena, this was crafted by the legendary Heidi Peterson Barrett, winemaker.

More to come...
Posted by UnwindWine at 8:34 AM No comments: Links to this post