For a comparison tasting of three distinctive select California Napa Cabernets, Bill & Beth had me over for a pot roast dinner. I brought a Del Dotto "David" Napa Valley Cabernet based red blend. Bill opened a Quintessa Napa Valley Red 2010, and for a trio comparative tasting, a Cliff Lede Napa Cab 2010. A nice tasting of three select Napa Cabernets representing three different styles, each with a distinctive character and profile. 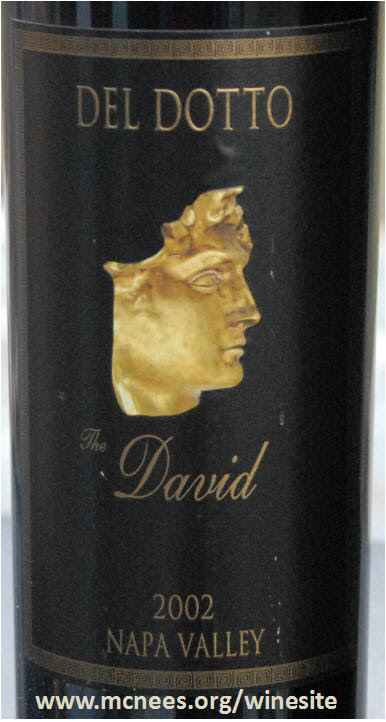 Named for proprietor producer David Del Dotto, one could argue that this is the flagship wine of this prolific producer. We acquired this bottle during one of several winery visits during this era. This was an aggressive ambitious offering of a Bordeaux blend with 59% Cabernet Sauvignon, 22% Merlot, and 19% Cabernet Franc. Four hundred cases were produced.

In it's twelfth year, this was still vibrant and lively but will likely not improve further with age. Dark garnet colored, full bodied and bold, the Rutherford fruit shows through as the expressive full forward black berry and black cherry fruits predominate with accents of cassis, spice box and Mayacamas Cedar tones. That Del Dotto craftmanship of layered oak and hints of mocha are apparent on a long soft, plush, layered fine tannin finish. 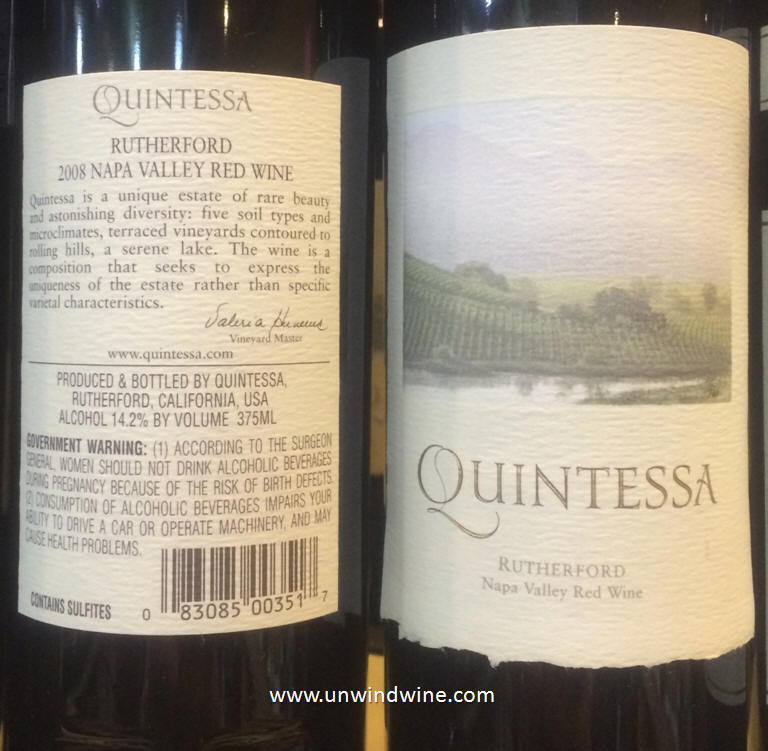 The 'quint' or five in the name Quintessa reflects both the five hills that make up the diverse estate property in the southeast corner of the Rutherford appellation, as well as the five Bordeaux varietals they grow for this flagship meritage blend wine. The magnificent Quintessa winery along Silverado Trail was one of the first elegant upscale big budget facilities of the modern era which is almost modest by today's standards of opulance. We visited the property back during our Napa Wine Experience 2003. While this is another Rutherford based Bordeaux Blend, it is a contrast in style to the Del Dotto.

Almost subdued in contrast to the bolder more aggressive Cal Cabs, Quintessa is elegant, polished, a symphony of flavors that take time to unfold in the glass, best revealed with an accompaniment of matched food - perfect with the pot roast and roasted carrots. Dark inky color, medium to full bodied, the black berry fruits are refined revealing layers of fruit, graphite, black currant and tones of soft subtle mocha, sweet oak and muted flora with finesse on the smooth silky tannin finish. This will likely evolve to reveal more sophistication and complexity with some age. 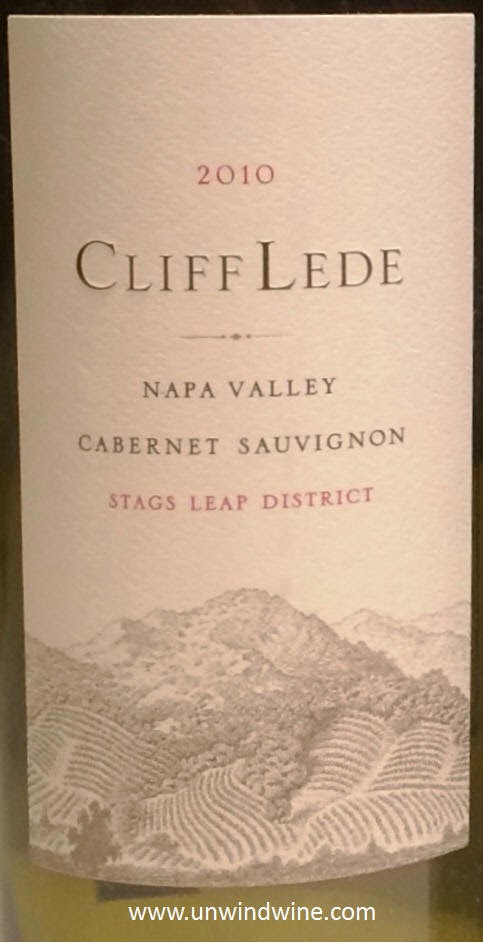 One of our favorites and mainstays of both Bill's and my cellars, the Cliff Lede Stags Leap property is very near the Quintessa site geographically, but stylistically, the estate Cabernet is more like the Del Dotto David with its bolder, more vibrant forward fruit compared to the Quintessa, but slightly moderate from the more 'over-the-top' Del Dotto. An interesting cross section representing the best of Napa Valley Cabernet.

Bill's notes summed it up well, "Deep indigo color. Complex layered, bright red fruit, sour cherry and raspberry on the palate. Lingering finish with a hint of oak. This is delicious and drinking beautifully right now. Interesting comparison to a 2002 Del Dotto "David". Stylistically very similar profiles. The Lede was almost a lighter "little brother" to the Del Dotto."

Bill gave this 93 points. I gave it 92 as it compared with the other two wines, despite its stylistic difference. 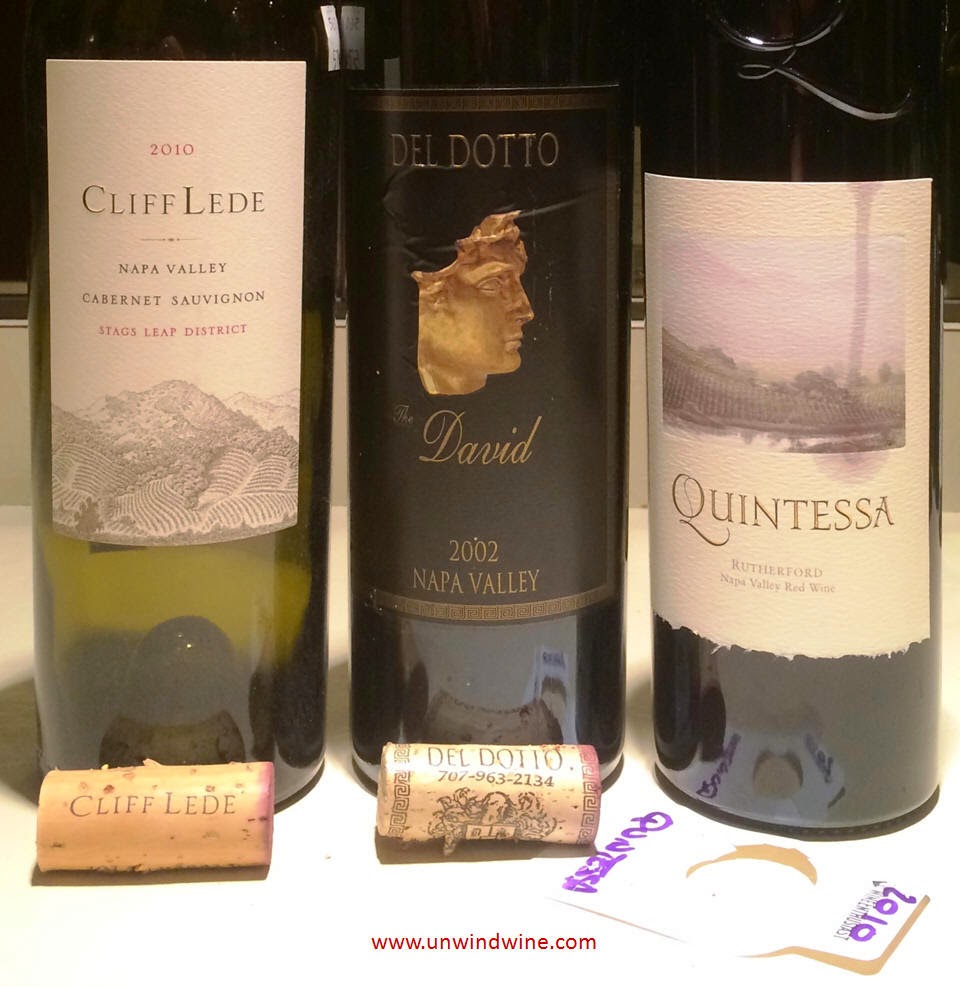 Posted by UnwindWine at 10:20 PM No comments: