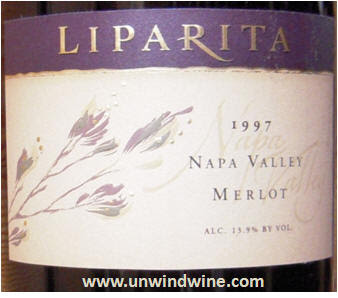 We pulled this from the cellar for a perfect accompaniment with grilled steak and salmon dinner on the deck.

This is one of the last few remaining bottles from our collection that signals closing in on the end of an era... As written in these pages, back in the mid-late nineties, we met with then winemaker Gove Celia and tasted this wine at the custom crush facility in central Napa, either Rutherford or Oakville as I recall.

The brand and label disappeared from the market around the millennium until it was acquired under new ownership in 2006, bringing back the legendary name under new branding and packaging/labeling.

We're getting down to the last few remaining bottles of this label and the Cabernet. Consistent with tasting notes from earlier tastings in 2010 and most recently 2014, this is still holding its own and remains well within its drinking window, albeit it won't improve any further with age. This is notable since those were tasted from magnum and this from a standard 750 ml bottle.

Dark garnet coloured, earthiness bleeds off to reveal black cherry, ripe black raspberry and cassis with a hint of mocha blackberry and smoke on the finish.

Posted by UnwindWine at 8:42 AM No comments: Links to this post