As the Coronavirus shut-in continues, tonight, we ordered out from Angelis Italian, our favorite neigborhood trattoria and wanted a special bottle of wine, so we pulled from the cellar this Constant Diamond Mountain Cabernet.

We discovered and acquired this wine when we visited the spectacular picturesque Constant Vineyards estate high atop Diamond Mountain during our Diamond Mountain Appellation Napa Valley Wine Experience in 2011.

We still hold close to a case of Constant wines and tonight we were rewarded for being patient as this wine has developed very nicely.

Our tasting and visit back then were hosted by proprietor Freddie Constant, founder and proprietor. Sadly, Freddie passed away in 2014. All of our group that were there remember him fondly and toast him each time we drink his wine.

The Diamond Mountain District appellation, one of the smaller Napa wine districts, sits just south of and above the town of Calistoga in the northwest corner of Napa Valley.

Today the area is home to some of the most notable and prestigious labels including the namesake label Diamond Mountain vineyards. Our afternoon on the mountaintop retreat was one of the more memorable settings from our many Napa Valley trips.

The mountaintop land that would become Constant Diamond Mountain Vineyard was first settled in 1895 by Andras Rasmussen, a Danish immigrant. After working in the wine industry for 15 years at Talcoa Vineyard (now Hudson Vineyard in Carneros), at Summit Vineyard and Winery, and studying viticulture at UC Davis – Rasmussen purchased 120 forested acres atop Diamond Mountain, cleared about 30 acres himself, and planted the first grapevines at the summit.

The vines were abandoned in the 1920s and 1930s due to Prohibition.

Constant Diamond Mountain Vineyard was established by Freddy and Mary Constant in 1993 when they bought a dilapidated but historic farmhouse and set upon reestablishing the vineyards which by then were overgrown and wild.

The couple had backgrounds as radio station entrepreneurs but their plan on Diamond Mountain was to grow and sell grapes to winemakers. They believed they had a unique and spectacular plot of land capable of producing premium fruit and soon they were growing grapes for several of the best winemakers in the area.

The started producing small amounts of Cabernet Sauvignon but their first vintage in 1993 was not to their standards and it was never released.  They released their first vintage in 1995 under the Constant Diamond Mountain Vineyard label. They proceeded to build a winery on the estate producing their wine under the Constant label and brand. In 1999 Wine Spectator wrote that Constant was “a new can’t miss Cabernet, this vineyard is able to produce stunning wines on a consistent basis.” The original winemaker was the notable Philippe Melka. With the 2009 vintage, Paul Hobbs took over as consulting winemaker.

Notably, we collect Philippe Melka wines to this day an featured his label at a recent business dinner.

Freddie and Mary hired renowned architect Howard Backen who built a stunning house along with a tasting room hospitality center overlooking the valley floor with a full view of Mount St. Helena.

In 2016, Aries Liu and Sai You became the property’s caretakers with the continued commitment to producing some of Napa Valley’s best Bordeaux varietals. 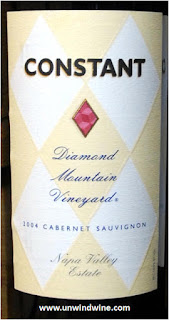 I believe this is the best, most memorable Constant Cabernet I have had and may be, at sixteen years of age, at the apex of its drinking profile and window.

The blend includes small amounts of Cabernet Franc and Merlot.

Posted by UnwindWine at 9:16 AM No comments: