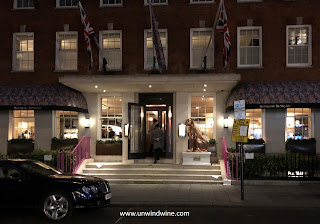 For a team dinner upon our first and only night in London, we dined across Grosvenor Square from our hotel at 34 Mayfair Restaurant in the shadow of the old US Embassy, now being completely renovated into a chic upscale hotel.

34 Mayfair is trendy, cosmopolitan, chic and vibrant with a steak and seafood menu and a superb upscale winelist – ideal for our team dinner the night before our UK customer roundtable. 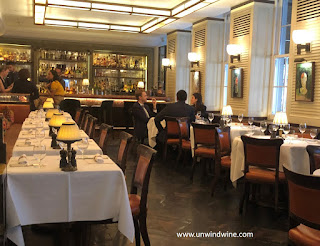 Normally, I would opt for Dover sole, especially on this side of the pond, but I was intrigued by the Saltcoats Scottish beef steak, especially when colleague Alastair shared with us that it was raised from where his ‘mum’ hails, hence we opted for the local fare – each of us in the bone in ribeye (shown).

For the entrée course we ordered from the winelist a Bordeaux Grand Cru Classe which proved to be a perfect complement to our steak dinner selections. 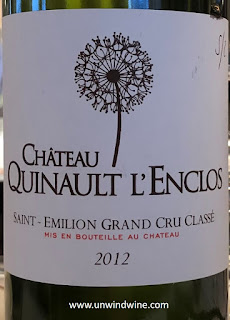 We have tasted this wine at the UGCB annual release tour on several occasions and hold several vintages of this label dating back to 2003. This vintage release adorns a different new branding label from our older vintages, which apparently was changed around the 2009 vintage.

This was more forward, expressive and vibrant than I ever remember for this label. 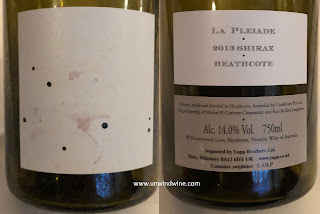 For our dessert course, I was intrigued by and selected this Heathcote Shiraz, from Victoria Australia, partly due to the notable well known Rhone producer Michel Chapoutier, and this wine's Australian origin, and the distinctive creative label branding. I was previously not aware of an Australian offering from Michel Chapoutier.

This particular label is named after the celestial constellation Pléîade, which adorns the front label solely, sans any other markings or information, save a couple wine blots.

La Pléiade is a collaborative effort between Michel and Corrine Chapoutier and Ron and Eva Laughton. Their intent was to make a terroir driven wine out of simple land right on a clay fault in Australia. In 1990, the idea of terroir was new to that continent.

A former food scientist, Ron Laughton and his wife Elva created their Jasper Hill estate in Heathcote, Victoria in 1975 (70 miles north of Melbourne), drawn by the region’s distinctive geology, namely an iron-rich seam of Cambrian clay on which the vineyards are strategically located.


According to the rear label, the partnership between Michael and Corrine Chapoutier and Ron and Elva Laughton is imported into the UK by Yapp Brothers Ltd, yapp.co.uk, so it is not necessarily available in the US, hence an interesting find to taste when the chance presents itself.

This may have been produced with the British or European palette in mind. At 14.0% alcohol it was much more tame and subdued than many of the big Aussie Shiraz’s imported into the US to a market favoring big bold concentrated and firmly structured fruit forward and high alcohol content wines.


Ron Laughton has a longstanding friendship with Michel Chapoutier who formed this joint venture vineyard planted with a mixture of Heathcote Shiraz and Hermitage Syrah in 1998. The resultant wine was called 'La Pleiade', named after the constellation visible from both hemispheres.


The partnership between Michel Chapoutier from France's Rhone region and Ron Laughton of the Heathcote estate, Jasper Hill was founded in 1997. Their first vintage release was in 2003. Initially called "Cambrian," "Cluster M45" is now the U.S. label for this wine, known as "La Pleiade" elsewhere. It is made from 100% Shiraz from a 20-acre single vineyard just south of Jasper Hill's Georgia's Paddock, which is planted with a 50/50 mix of vines taken from Jasper Hill and Chapoutier's vineyards (imported from France).
This was garnet colored, but medium bodied with black berry fruits with notes of spices and hints of tea, leather, tobacco leaf and mineral on the moderate finish.


Posted by UnwindWine at 5:35 PM No comments: