This is a single vineyard designated, old vine Shiraz from a site planted back around 1894, and was classified as a Barossa Centenarian Vine by the Barossa Old Vine Chapter. The site is on the banks of the North Para River that is surrounded by the growing township of Nuriootpa in the Barossa Valley wine region in south central Australia.

The historic name 'Nuriootpa' is thought to be derived from an Aboriginal word meaning ‘meeting place’, a tribute to the Aboriginals who once gathered there to trade. It is the commercial centre of the Barossa and ‘Nuri’ is the centre of the region's wine production, with more than 50 wineries in the area including some of the best-known producers including Elderton and the legendary Penfolds.

Elderton is a classic century old wine estate that was purchased by the Ashmead family in 1979 who produced their first release label in 1982. Ashmeads and their Elderton Vineyards wines have become one of the classic Australian premium wines and Command is the signature flagship of their Barossa family of Shiraz labels.

We have a mixed case of several vintages of Command dating back a dozen plus years of this wine. My last tasting of this vintage was back in 2006 when I wrote "this wine was more approachable than the first time we tried it - but it still needs some time to meld and reveal its complex fruit".

Well, nine years later, it is smoother and more polished and is certainly approachable with its delicious melange of black and blue fruits. Reiterating my initial tasting note when I wrote this was "huge, powerful, dense, richly complex, dark", tonight it was big, dense, rich and complex, but now is smoother and more approachable with full forward fruits of ripe plum, candied cherry, black raspberry, and blueberry fruits with tones of black pepper, hints of anise and dark chocolate punched by firm intense tannins on a smooth and long finish.

This was a perfect compliment to grilled sirloin steak with twice baked potatoes and peas.

Posted by UnwindWine at 9:22 PM No comments: 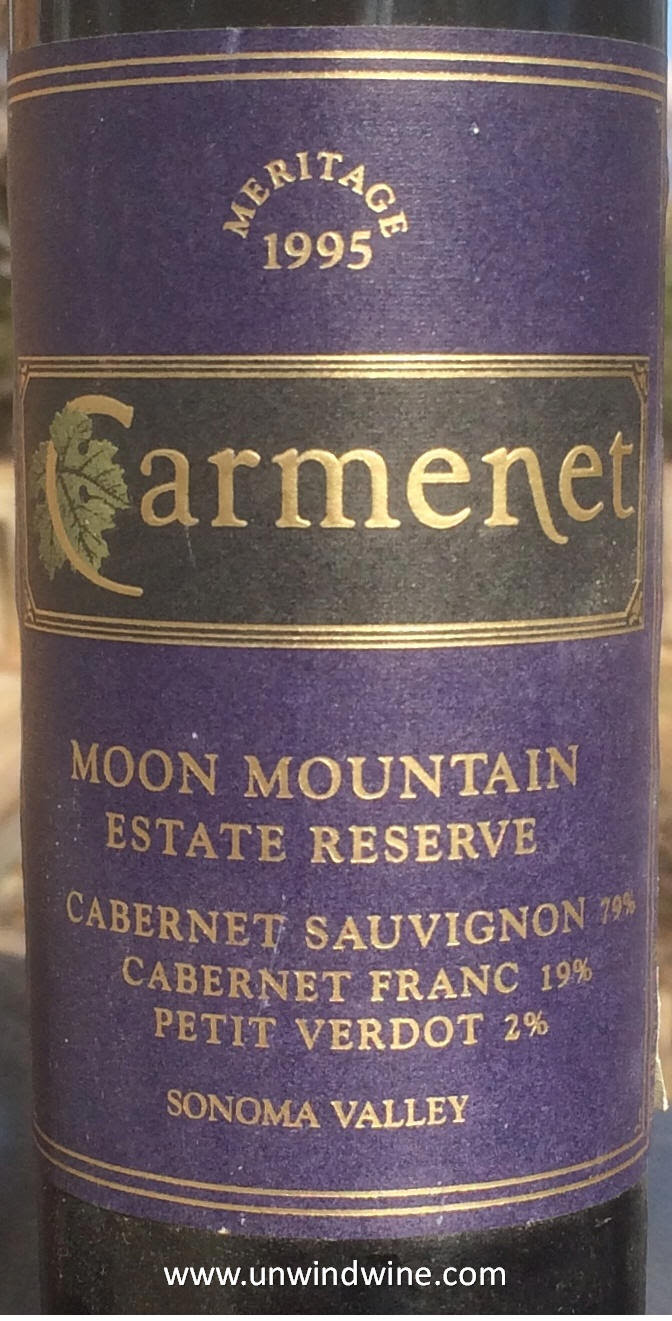 This is the last of a 'six pack' of half bottles of this label. Unlike several previous tasting notes of this same wine and format (see links below) - this bottle did not show diminution from aging, rather it drank like a gracefully aging Bordeaux, to which it aspires to emulate. Surprising since its the last and therefore oldest tasting at twenty years, and from a half bottle, which tends to hold age less than a regular or larger format bottle. Great accompaniment to grilled pepper steak.

Dark garnet colored, medium bodied, there was no opening with a slight barnyard funkiness (as one tasting before), rather it opened with vibrant floral and fruits, ripe cherry, black cherry, raspberry and some blue notes, with slightly earthy, leather, cedar and herb with hints of smoke on a moderate tannin finish.