Inspired by the aged vintage three decade old St Julien Bordeaux we had last week, I was eager for an encore and pulled from the cellar this 1989 Gruaud Larose to enjoy with Linda's beef stew dinner.

Our visit to Château Gruaud Larose was another one of the highlights of our trip to the Bordeaux Medoc region and the St Julien appellation this summer.

Our Cellartracker records show we still hold seven bottles from the OWC - Original Wood Case of this label we acquired upon release back at the time.

Thankfully, tonight's experience was equally rewarding, another well preserved and aged fine Bordeaux that was drinking at its apex, even at thirty years of age, showing no diminution whatsoever from age. 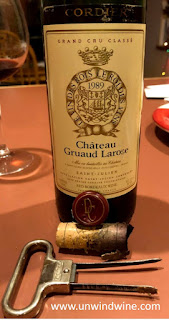 Like the Ducru-Beaucaillou we consumed the other night, we still hold several cases of this label from ten vintages dating back to the birthyear vintages of our kids, 1981, 1982, 1985, and several vintages since, including several in large format magnum (1.5l) and double magnum (30l).

While we hold several older vintages, we chose the 1989 due the multitude of bottles we have from this vintage. As part of cellar management, I pulled the bottle with the lowest fill level however all seven bottles were nearly identical, not surprising since they all came from the same case and had the same provenance.

The fill level was at lower neck level with intact and prime condition foil and label. The cork was very saturated for the lower half but came out intact using an ah-so two pronged cork puller.

https://www.gruaud-larose.com/en/
Posted by UnwindWine at 5:04 PM No comments: Links to this post