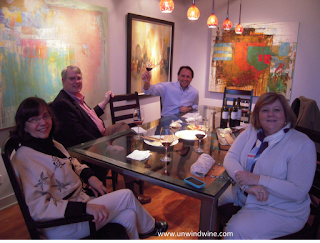 "Deep, opaque,purple color. Long legs. A bit of perfume, tobacco and spice on the nose. Big and fruit forward, this is a complex wine with layers of black raspberry, plum and blueberry, evolving to chocolate, clove and a hint of tobacco. Drinking very well now but certainly has 5 to 8 years left. Throwing a surprising amount of sediment it's age but this seems to be a Cliff Lede trait. Nicely accompanied by assorted flatbreads, Spanish cheeses and green apples. Drank with Beth, Rick, Linda and Peter with a terrific South Loop view of the Chicago skyline from Peter's apartment."

Winemaker's Notes: "The 2006 Cabernet lights up out of the bottle with a precocious bouquet of exotic spices and old leather. Given a moment to rest, aromas of sweet marjoram, rose oil, cardamom and blackcurrant jam evolve into exceptionally sweet floral notes of star jasmine and a touch of trumpet vine. Initial flavors of cherry deepen as fine tannins expand and unfold. Dark stone fruits mix and integrate with sweet tannins and fleshy acidity, giving way to a persimmon inspired finish that coats the mouth." 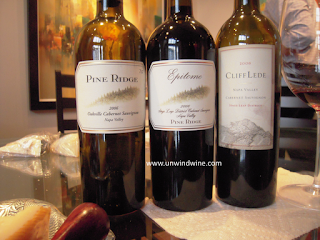 Epitome is sourced from grapes grown higher overlooking the valley from the ridge, typically with lower yields, more concentrated with higher extracted fruits. It showed a profile and flavors similar to the Oakville Cab below but I found it to be a bit tighter with more subdued fruits, perhaps due to being slightly more concentrated and firm thereby requiring more time to open and reveal itself.

We enjoyed dinner at May Street Cafe, a quaint trendy neighborhood restaurant that features Neuvo Latin and contemporary American cuisine that is American, part Mexican, part Cuban with accents of Asian - steaks and seafood, that is more sophisticated and stylish than its Pilsen Little Village industrial neighborhood location on Chicago's near southwest side would indicate. At dinner we took BYOB and tasted two other Napa Valley Cabernet Sauvignons that were perfect accents and complements to the char-grilled steaks. 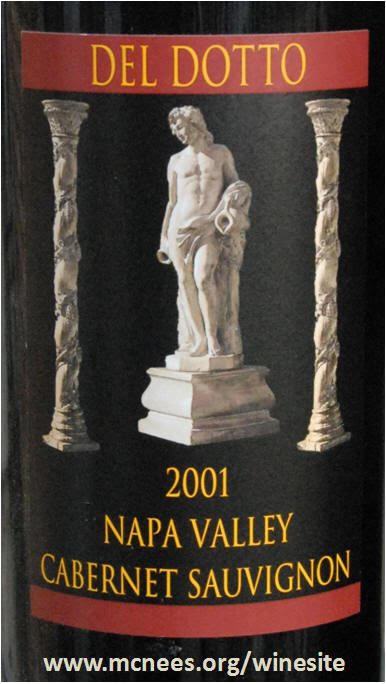 
Del Dotto is one of our perennial favorite Napa Cabs that we have featured in many Napa Valley visits and is a vertical collection in our cellar going back to the inaugural 1993 vintage. See our Del Dotto features on unwindWine.com including Del Dotto - Napa Valley,  Napa Wine Experience 2003 and Napa Wine Experience 99 to mention a few. Their spectacular winery and cellar tour right on Route 29 at Zinfandel Lane as you enter St Helena from the south are a must see for everyone during a visit to Napa Valley.

This same wine is featured in their extraordinary Connoisseurs Series in which they age the same wine in a variety of oak cooperages to highlight the different oak influences on the wine. We featured a horizontal tasting of the 2001 Del Dotto Connoisseur Series last year as listed on unwindWine.com site.

"Deep garnet color. A bit perfumey on the nose, much like a Margaux, with some evidence of spice. Opened a bit sweet with notes of raspberry and cherry. After about 30 minutes this smoothed out significantly to become much more elegant and balanced with notes of leather, spice and tobacco with silky tannins. A more delicate contrast to the big 2001 Del Dotto served with wonderful seasoned NY strip with chipotle mashed potatoes and broiled mushroom at May St. cafe in Pilsen."