We toured the Niagara Peninsula back in 2012 visiting the legendary Inniskillin when we tasted and acquired their legendary Icewines during our visit to the Inniskillin Winery Estate, and the up and coming Jackson Trigg wineries as highlights of our time there. I have to admit I do not recall or have a record of when or where we acquired this Kittling Ridge Estates Vidal Icewine that I pulled from the cellar for tonight's tasting. I chose this bottle partly because of its festive box packaging ideal for gifting, and its decade milestone vintage as we close out '17. I do,  at least, have a record of it being in our cellar inventory.

They call this the showpiece of their collection of premium VQA (Canadian version of AVA or appellation) wines, this is harvested from estate vineyards in the heart of the Niagara Peninsula, Kittling Ridge are renowned for producing one of Canada’s first Icewines, called such because the grapes are harvested in the middle of winter when they are frozen on the vine. The grapes are hand-picked when the temperature falls below -8°C, then the frozen grapes are crushed immediately releasing a tiny amount of concentrated sweet nectar which is slowly fermented over several months.

This was a perfect complement to Linda's brie cheese in puffed pastry with roasted almonds and honey.

When released these wines are straw colored, darkening as they age to the color of weak then stronger tea. Tonight this was dark tea colored, full bodied, rich unctuous concentrated with notes of roasted almonds, honey, with hints of smokey roasted peach and apricot on the thick tongue coating lasting finish. 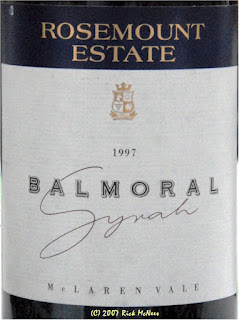 Consistent with earlier tasting notes, "Dark purple colour, full aroma of perfume and fruit - the diminution of fruit continues as this wine is showing its age further with ripe concentrated plum and blackberry and black cherry fruits hanging on but giving way to ripe raisin fig tones accented by leather and a somewhat funky wet cedar with a touch of vanilla and sweet cherry - tightly wound with a tinge of tight tannins and acid on the subdued fruit finish.'

'These notes from 2014 followed my earlier note in 2013 that said, "Its time to drink up as this '97 which is showing its age as the fruit starts to diminish somewhat. Looking at Cellartracker tasting notes, one writer reports this vintage still holding on while another says his is over the hill. While past its prime, this was still very much still inside the drinking window." Showing that continued diminution, I would say that while still holding, this is nearing the end of its drinking window."

This was a fitting wine to open on New Year's eve, twenty years beyond release, suitable tasting with festive holiday buffet foods of sausages, ham, olives and avocado dips and cheeses.