The Calera story was chronicled in the book, "The Heart Break Grape" back in the early nineties, about the challenges and turmoils of growing the finicky grape varietal Pinot Noir. Producer Josh Jensen pioneered growing Pinot in the 'new world' starting with his search of the perfect place to grow his grapes. During college he took time off to work in the cellars in the great domaines of Burgundy and then came back to his home state California to apply what he had learned. At the time, prevailing view was that Pinot Noir could not be grown successfully in California. He set out to prove that notion wrong.

He started with the search for the perfect place starting with limestone soil, and other elements of terroir to produce wines in the style of the greatest Pinots, the Burgundy wines of France. Josh Jensen's winemaker mentors in Burgundy emphasized the importance of limestone-rich soils, as present in the Côtes d’Or, to make great Pinot Noir and Chardonnay based wines.

He returned from France in 1971 and spent two years searching throughout California to find suitable limestone soils. He settled on the site of an old magnificently preserved 30 foot tall masonry limekiln in the Gavilan Mountains of Central California, purchasing the site in 1974, a high-elevation parcel with a limestone deposit of several million tons. Limestone had been commercially quarried there on the Jensen Mt. Harlan property a hundred years earlier.

To this day, the kiln on the site is the centerpiece of Calera branding, featured prominently on the lables, the name “Calera” being the Spanish world for “limekiln,”

Mt Harlan is near the town of Hollister, about ninety miles south of San Fransisco, twenty five miles inland from Monterey Bay on the Pacific Coast. Mt Harlan gained the distinction of its own AVA (American Viticultural Area) in 1990, in response to the petition to the Department of the Treasury Alcohol and Tobacco Tax and Trade Bureau by Josh Jensen and the Calera Wine Company, the only commercial winery in the appellation. The appellation, the legally defined and protected geographical boundaries, also stipulates what grapes may be grown, maximum grape yields, alcohol level, and other quality factors that apply before the appellation name may legally appear on a wine bottle label. The Mt Harlan AVA is 7700 acres of which just 100 are planted in vines. 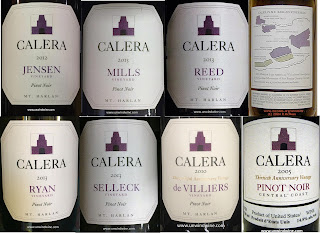 Josh planted his first 24 acres of pinot noir in 1975 in three separate parcels. In the Burgundian tradition, he named each parcel individually to recognize the terroir of each, that each would produce a distinct wine. The original vineyard designations remain to this day, the Selleck Vineyard (5 acres), Reed Vineyard (5 acres), and Jensen Vineyard (14 acres). These vineyards produced their initial tiny crop in 1978. The Ryan Vineyards, named after Jim Ryan, longtime vineyard manager were added later.  (Upper - 9.4 acres and Lower – 3.7 acres)

Josh made Calera's first wine in 1975, 1000 cases of zinfandel, produced from purchased grapes. During his first two years as a winemaker, he made the Calera wines in a rented space in a larger nearby winery.

Josh purchased property to build the winery in 1977, a 100 acre site on Cienega Road halfway between the vineyard and the town of Hollister. Located 1000 feet lower in elevation than the vineyard, this property had the benefits of development improvements such as a paved road,  telephone and electrical service (services which still to this day are unavailable on Mt. Harlan).

Three decades later, Calera have earned the distinction of the pioneer of American Pinot Noir. The legendary wine critic Robert Parker  has stated that: "Calera is one of the most compelling Pinot Noir specialists of not only the New World, but of Planet Earth."

We first discovered Calera in the eighties, exploring wines from those earliest vintages. Decades later, we enjoy collecting Calera wines from the Ryan and Reed vineyards, as somewhat namesake signature wines for Son Ryan and his Reid. 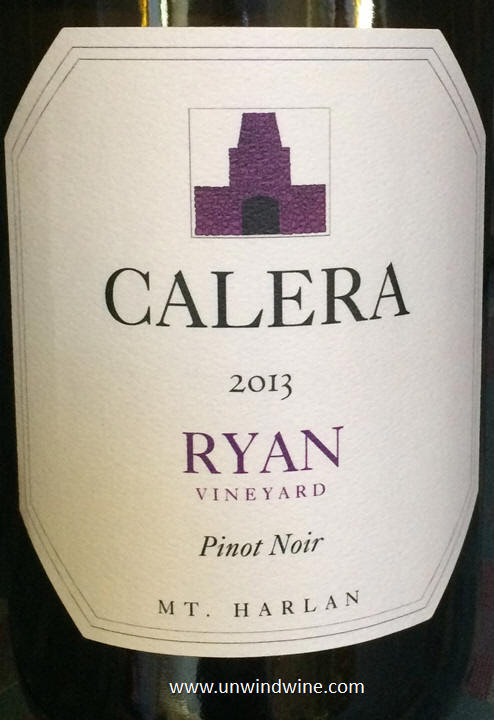 So it was that I picked up that latest release of Calera Ryan Vineyard Pinot,Noir 2013.

This may be the best release of this label I have tasted, being by far the most vibrant and expressive forward fruits I can remember.

This is not a wimpy wine but powerful, yet smooth and polished, a symphony of concentrated dark berry fruit flavors with layers of black raspberry, black cherry, hints of cranberry, graphite and tones of tobacco leaf, spices of thyme, bay leaf and floral violets with a long lingering tightly wound fine grained tannins on the finish.

Robert Parker's Wine Advocate and Vinous both gave this 95 points Vinous; Wine Enthusiast gave it 92 points and a Cellar Selection

Posted by UnwindWine at 8:02 AM No comments: