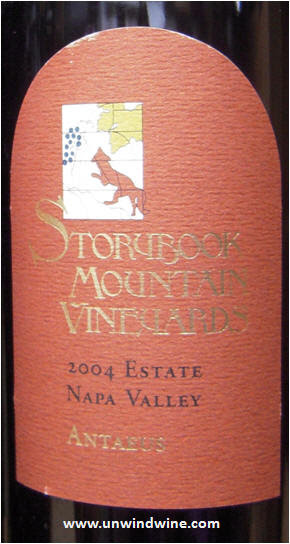 http://www.cellartracker.com/wine.asp?iWine=279887
Posted by UnwindWine at 9:32 PM No comments:

Fantesca Estate and Winery, one of our favorite Napa Valley producers is owned by Duane and Susan Hoff, who moved on from their careers as executives at Best Buy for this Spring Mountain District winery above St Helena in the Mayacamas Range between Mt Veeder and Diamond Mountain. We visited their spectacular mountainside estate during our Napa Wine Experiences in 2007 and in 2009.

Initial 2002-2007 vintages were managed by winemakers Nils and Kirk Venge; then in 2008 they teamed up with legendary winemaker Heidi Barrett. From their ten acre vineyard, they produce ultra-premium 100% Cabernet Sauvignon, and there is an acre planted in Petit Verdot. They also source grapes from the Sonoma County Russian River Valley to produce a bright crisp full flavored Burgundian Chardonnay, the first ever by Heidi Barrett. They also released a small production special bottling Burgundian style Pinot Noir, King Richard's Reserve especially for Susan's father Richard who favors such a style Pinot. In 2007 they released a Bordeaux Blend Le Petit Soeur, (shown below).  Fantesca products make for festive serving features or as elegant gifts as are lavishly packaged in stylish heavy etched glass bottles with painted 'labels', or in original wood cases.


For a special occasion, we served a Fantesca Estate and Winery, Spring Mountain District Cabernet Sauvignon 2004.

Medium-full bodied, dark garnet color; complex but smooth and polished with bright forward fruits of black currant, dark berry and cherry, accented by sweet dark chocolate, a hint of cassis, and a tone of spice on the lingering refined tannin finish.

Taken and served at Mark & Shirley's, this was the blockbuster hit of the evening, a great complement to artisan cheeses and rib-eye steak sandwiches.

Posted by UnwindWine at 7:44 PM No comments:

Posted by UnwindWine at 4:28 PM No comments: