I've written a couple times about this Negotiant - Broker and some of the extraordinary values that occasionally appear. Recently we've featured finds such as Lot 101 Columbia Valley Syrah and Lot 500 Cabernet from another like vendor (Cameron Hughs). This wine is not of that caliber or discovery, but it is notable none-the-less. One anomaly that belies their model of maintaining secrecy to 'protect' the source, this particular bottling reveals the producer source on the cork when extracted from the bottle. How does that happen? They likely purchased bottled product that had not yet been labeled. This is a common practice of producers to bottle the wine but not affix the labels till later. This makes sense when small lot producers lack the high volume automated lines that would combine these steps in one operation. Another reason for doing this is that if the bottles are going to be stored for some period of time, it prevents the labels from being worn, torn, soiled or otherwise diminished in handling, until which time they're ready to go to market.

Again, the reason this is an anomaly is that the producer is usually anonymous since they're selling their wine through this 'alternate' channel, often at a reduced price. Hence they don't want to diminish the value associated with their brand. According to the Ninety Plus Cellars, 8000 cases were produced of this wine and the producer's release price was $18 and they sell it for $12. We know this producer's label of this wine to be available at various merchants in the range of $20 to $24.

In this case, the cork reveals the producer to be Bodega Navarro Correas. This label is widely available in distribution and is can be found for the same price point as offered by Ninety-Plus cellars. This is likely the result of the producer thinning inventories of excess product, or simply seeking a parallel channel of distribution for their product. Never-the-less, this was an interesting wine that provided pleasurable drinking and good value QPR (Quality Price Ratio). It calls for seeking this out in the regular producer label for comparison as it should be readily available, with 8000 cases being produced. 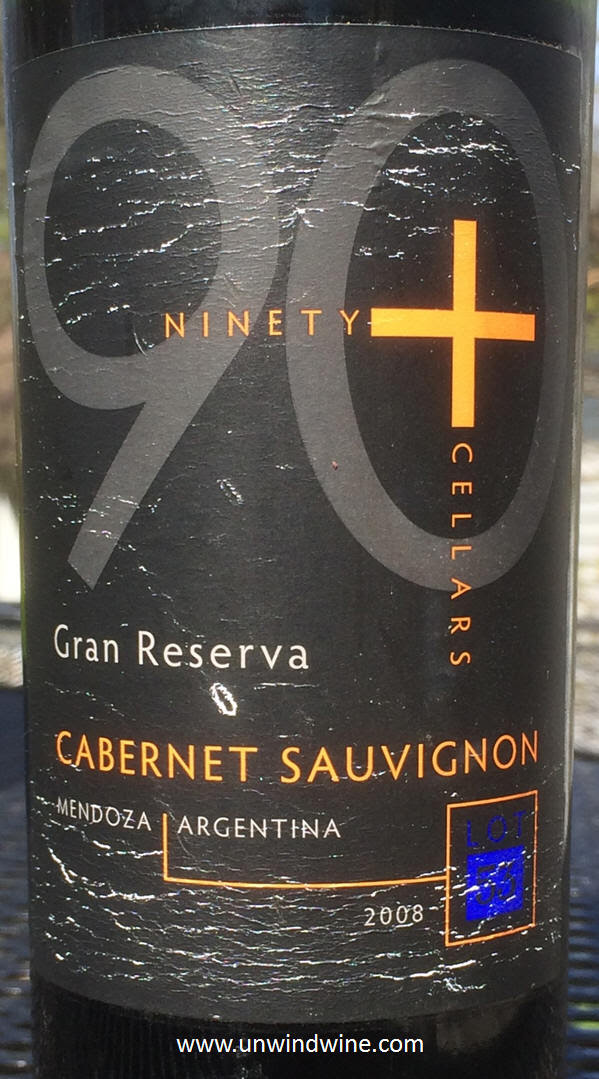 The Navarro Correas family is an historic and prestigious name with a long history of producing quality wines. The Correas family history dates back to 1798, when Sir Juan de Dios Correas planted the first vine seeds in the lands of Mendoza at the foot of the Andes ridge. Sir Juan De Dios also played an active role in the public life of Mendoza, where he served as Municipal Councillor in the year 1814 and as governor in 1824. For more than a century starting in the mid 1800's, the family sold grapes and wines to other producers. Finally, in 1974 Sir Edmundo Navarro Correas, a direct descendant of Juan de Dios Correas, started to release wines under the family name.

Navarro Correas grows grapes in selected micro-climates in Mendoza, located at 2400 feet elevation. They grow various wine varietal grapes in areas such as Tunuyan, Tupungato, Maipu, Ugarteche, Pedriel and Agrelo.  They are are irrigated with the melted snows from the Andes slopes. Their Cabernet Sauvignon comes primarily from the regions of Tunuyan and Tupungato in the Uco Valley.

According to the merchant site, they say, "An aromatic melody of black currant, cherry and cassis rises above a harmonious backdrop of tobacco, mocha and toasty oak.  On the palate, juicy, dark berry fruit cascades across your tongue followed by a trickle of sweet spice and savory plums."

My comments - Deep dark purple color, medium-full bodied with huge floral and fruit aromas and flavors of black berry and blue berry fruits, a layer of sweet caramel, mocha chocolate and tones of oak, tobacco and spice. It opened with a hot layer of alcohol but this burned off over an hour but left a big strong layer of tangy tannin and acid that lingers on the pallet.

This was a perfect complement to a grilled steak with savory mashed potatoes and gravy.