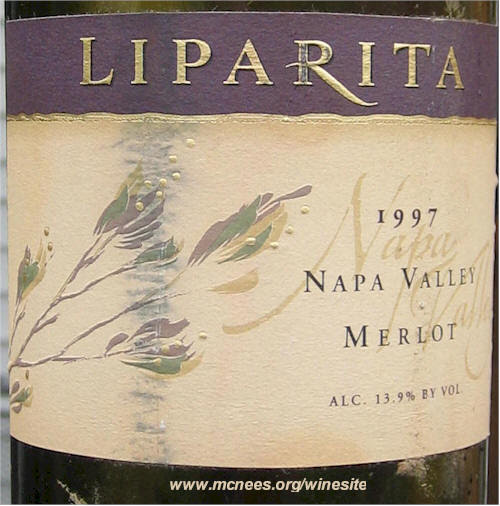 We first tasted this from the barrel with winemaker Gove Celia at the custom crush facility in Oakville back during our Napa Valley Wine Experience in 1998. We acquired several bottles upon release and several more at auction over the years. We're down to the a couple bottles as this wine approaches the end of its drinking window. Drank with colleague Gary M who came over to for an end of week wind down and debrief.  Tasted with assortment of artisan cheeses and chocolates. I had open a remaining half bottle of Cabernet listed below from tasting earlier in the week afforded the opportunity to comparison taste two Bordeaux varietals, this Merlot alongside a Cabernet. Gary was so enthralled with the Liparita Merlot, compared to a Cabernet, that we pulled from the cellar a Liparita 1997 Napa Cab to taste, which he ended up taking home for another time.

Dark blackish/garnet coloured, earthiness bleeds off to reveal black cherry, ripe black raspberry and cassis with a hint of mocha blackberry and smoke on the finish.

As noted, I still had half of this bottle remaining from tasting earlier in the week, so it afforded a comparison tasting of two Bordeaux varietals, a Cabernet alongside a Merlot. As I wrote earlier this week, I wrote about this wine in this blog back in July. Following our Penfold's tasting last week of several South Australia Cabernets or Cabernet/Shiraz', I pulled this aged twelve year old from the cellar for a comparison tasting. While we have literally hundreds of aged Napa Cabernets and Bordeaux in our cellar, we only have a few aged Australian Cabernets, so I was interested to taste one and see how they are aging.

This bottle had aged very nicely and was still holding its fruit and accents with no sign of diminution, contrary to earlier tasting of this release. This was nicely balanced, smooth and complex and could have passed for a left bank Bordeaux in a blind tasting. Dark blackish purple colored, medium bodied, black berry and black raspberry fruits were accented by layers of earthy leather, spice and cedar with moderately firm tannins on the lingering finish.

Posted by UnwindWine at 7:15 AM No comments: Links to this post