Papillon and Legende at Indigo Springfield


Papillon and Legende at Indigo Springfield

Indigo with their whimsical fun Blue Dog gallery offers a nice atmosphere for a business dinner, a special occasion or intimate dinner date. As always, the Indigo staff were professional, proficient, accommodating and attentive. The steaks were done to perfection and this evening they served an imaginative gorgonzola laced roasted potatoes accompaniment. The sushi entree left something to be desired and should be avoided in favor of their traditional midwestern faire.

Papillion is a Bordeaux Proprietary Blend from Dave Phinney, of Orin Swift Cellars, producer of a range of imaginative and bold wines that showcase the range and diversity of the best of Napa Valley wines.  Orin Swift perhaps is best known for The Prisoner series of wines which he sold a few years ago. He now focuses on and produces his higher end selections including this bold but polished red blend.

David Swift Phinney began his wine journey back in 1995 when he traveled to Florence, Italy and discovered and got hooked on wine. After university graduation in 1997 he worked as as temporary harvest worker at Robert Mondavi Winery.  Setting out on his own, in 1998 he founded Orin Swift Cellars named for his father’s middle name Orin and his mother’s maiden name Swift. He spent his early years making wines for others and developing a line of Zinfandel based wines under his own label from fruit sourced from others.

I've written about how Phinny is one of the more fascinating studies in wine branding. In his Orin Swift line, he shows why he is known for and recognized by his imaginative, creative, if not mysterious, even weird branding with his artistic naming and labeling of his wines. His line-up reads more like a series of mystery novels than a flight of fine wines - Abstract, China Doll, Mannequin, Machete, Mercury Head, Mute, Palermo, Papillon, Slander, Trigger Finger, and Veladora.

Mercury Head is his premium label Napa Valley Cabernet Sauvignon and simply features a US mint original Mercury Head dime affixed to the bottle in place of a label. I've written in these pages about Machete with its series of labels with a dozen different photos of a mysterious woman brandishing a machete in various poses, many featuring a vintage Cadillac Eldorado. 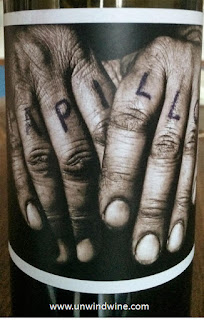 Papillon is a classic Bordeaux blend, Papillon features all the Bordeaux varietals - Cabernet Sauvignon, Merlot, Petit Verdot, Malbec and Cabernet Franc, the heavy weight weighs in at 15.1% alcohol. The grapes are sourced from Napa Valleys sub-appellations Oakville, Rutherford, and Howell Mountain, from top vineyards such as Stagecoach and Morisoli.

This was dark garnet colored, full bodied, complex, bold, powerful, concentrated, almost jammy with rich black fruits tones - blackberry, black raspberry, hint of black cherry, with a layer of anise, dusty cedar, hints of graphite, mocha and loamy earth with firm textured tannins on a long lingering finish. This probably needs a couple years to settle and will be interesting to watch it age over the next decade. 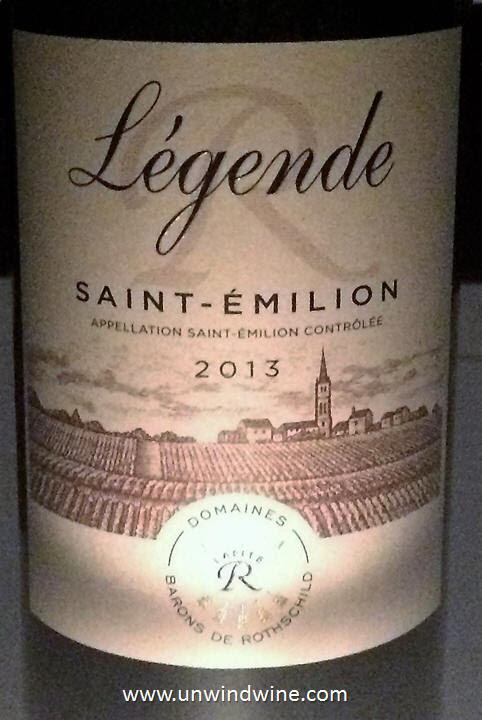 Légende is a second label from the legendary Barons de Rothschild (Lafite) producer. Of course they're best known for their classic 'first growth' Chateau Lafite Rothschild. But they also produce a wide range of more than a dozen labels for the wider general marketplace consumer - most from across the Bordeaux region.

The Legende family of wines includes more everyday selections from Bordeaux, one blend from the Bordeaux region, two from the left bank Medoc and Pauillac appellations, and this right bank offering from the St. Émilion appellation.

This 2013 may not be a fair representation of the label since it was one of the most difficult weather condition vintages in three decades. A wet spring, two hail storms in July and August that damaged the grape vines, followed by intermittent rains leading up to the harvest made the weather condition among the worst since the frost of 1991.

The challenging conditions of the 2013 season required meticulous work in the vineyards and very strict selection in the winery to produce this release which they considered an over-achievement under the circumstances rendering what they referred to as supple, with a gentle, crisp structure.

This was dark ruby colored, light-medium bodied, somewhat austere with delicate subdued black currant and raspberry fruits with a layer of pain grillé (toast), with hints of floral, tangy spice, smoke, tobacco leaf and leather.  In the style of the 'right bank', this is a blend of 95% Merlot and 5% Cabernet Franc.

http://www.indigocuisine.com/
Posted by UnwindWine at 9:43 AM No comments: Links to this post