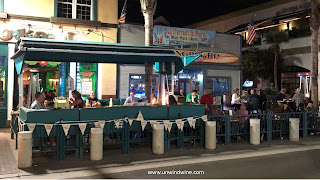 Passing through Orange County on my west coast roadshow, I stayed with Sister Jan and Bro-in-law Bill in Huntington Beach. We went downtown where they were holding their Tuesday evening festival.

We dined at the legendary Longboard bar where they are featuring Lobster Feast '18 for the fall. We picked up some Chardonnay up the street to take BYOB, Walt Sonoma Coast, and Grgich Blue Beret Napa, 2016's. 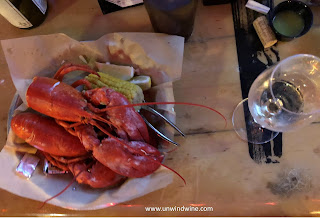 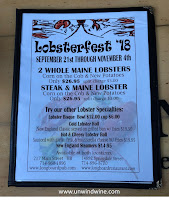 The Walt wine brand is from Hall Wines in Napa, named for Kathryn Hall's maiden name and her parents, Bob and Dolores Walt who were dedicated winegrowers. The Walt family produced six different varietals that they sold to several notable wineries.

We tasted a Walt Pinot Noir at the recent Kathryn Hall regional release tour in Chicago. That was a vineyard designated select label from Bob's Ranch vineyard on the Sonoma Coast. While this Chardonnay is designated Sonoma Coast, the rear label cites Bob's Ranch Vineyard as one of the sources for this bottling, a blend from numerous sources from the area. 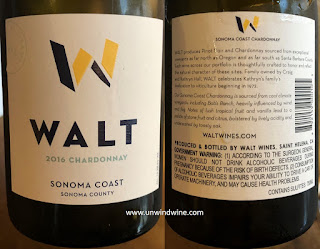 The winemaker notes: "Our Sonoma Coast Chardonnay sources from cool climate vineyards located near the influence of coastal breezes within the Sonoma wind gap. Notes of lush tropical fruit and vanilla lead to a palate of stone fruit and citrus, bolstered by lively acidity and underscored by toasty oak."

This was bright lively and full bodied, ideal for pleasurable sipping, and perfect for the lobster fest dinner accompaniment. 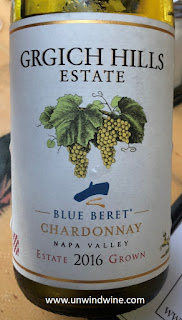 Miljenko “Mike” Grgich is a legend in the wine world and Napa Valley. He gained international recognition at the celebrated 'Paris Tasting of 1976' known as the Judgement of Paris, the historic blind tasting by a panel of eminent French judges did a comparison tasted of notable French wines opposite selections from upstart California Napa Valley. When their scores were tallied, the French judges were shocked to learn they had chosen the 1973 Chateau Montelena Chardonnay, crafted by Mike Grgich,  as the finest white wine in the world. The results stunned the international wine establishment and immediately earned Mike a reputation as one of the greatest winemakers in the world. The story chronicled in the book 'Judgement of Paris' and is told in a fantastic pop culture movie 'Bottle Shock'.

Thirty two years later, in 2008, 93 year Mike Grgich was was inducted into the Vintners Hall of Fame in honor of his many contributions to the wine industry. He hallmark is a sporting blue beret. Hence, this whimsical 'Blue Beret' label designated Estate Napa Valley Chardonnay.

Curiously, I find no reference to this label on the Grgich wines website, nor even on Cellartracker with its five million labels, only several postings from restaurant winelists. Perhaps its too early in its release cycle but wouldn't you think the producer would at least feature it? Its invisible in web postings to date. All I can think is that they consider this their 'generic' Napa Estate Chardonnay, but the Blue Beret is prominently featured on the label in a branding effort, that is clearly falling short in promotion and execution.

Afterwards, we picked up some artisan chocolates and took home to enjoy with an after dinner big red wine. 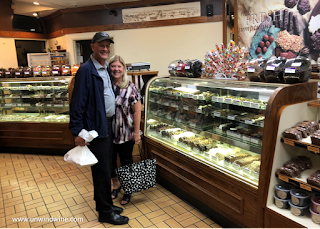 Posted by UnwindWine at 8:42 AM No comments: