As I wrote a while back when we first discovered this label, "We've seen the Montagna Napa Valley label but didn't connect it to the property we passed on Long Ranch Road on our way up to David Arthur vineyards at 1100 feet high atop Pritchard Hill in the Vaca Mountain range overlooking Napa Valley from the east. Interesting that Montagna is the project of Bob Long, one of the founders of David Arthur with his brother David.

It is said that these vineyards are part of the nine hundred acre parcel purchased by their parents back in the mid-sixties and seventies. We were already big fans of Pritchard Hill Cabernet and our visit to David Arthur was one of the highlights of our Napa Valley Wine Experience 2013. We visited Chappellet Vineyards during our Napa Wine Experience in 2009.

According to published reports, in May 2015, the 80-acre Montagna property on Pritchard Hill owned by Bob Long, with 32 acres planted to Cabernet Sauvignon, was put up for sale for an asking price of $55 million. Included in and contributing to that astronomical price is the fact the property also included more than 20,000 feet of caves, a 50,000-gallon winery permit, a hospitality area and a potential home site. The fact that the vineyard was already planted and the property already has a winery permit are also huge factors in valuing the property given the anti-development sentiments in Napa Valley that challenge any potential development.

Pritchard Hill is becoming one of the most exclusive sub-areas in Napa Valley. It is planted with about 350 acres of vines and is home to some of Napa's most extraordinary premium and super premium labels - Bryant Family, Chappellet, Colgin, Continuum, David Arthur and Ovid.

Montagna proprietor Bob Long and his family have been involved in the development of Pritchard Hill properties since the 1960’s. It is among the best terroir in Napa to not have a sub appellation designation.

Montagna is so named as it means 'mountain' in Italian. Fourteen acres of the Estate are planted in Bordeaux varietals Cabernet Sauvignon, Cabernet Franc and Petit Verdot. An adjoining 18 acres are planted in Cabernet Sauvignon on the site of original vineyard of David Arthur’s flagship premium label “Elevation”, named for its Elevation at 1147 feet above sea level. 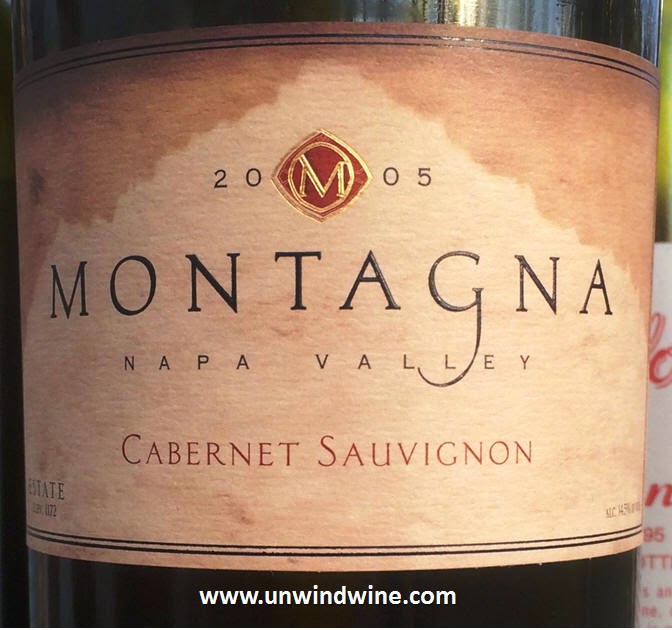 I got this wine from fellow Pour Boy wine buddy Dr Dan who acquired a case. He introduced me to this wine when he brought a bottle BYOB to our dinner at Folklore Argentine Grill steak house in Wicker Park in Chicago before a Hawks game.

This evening's tasting was consistent with earlier tasting notes when I wrote, "This was dark garnet colored, medium to full bodied, earth and leather predominate almost like a left bank Bordeaux, giving way to black cherry, black currant and black berry fruits accented by spice, cigar box and hints of cedar with firm lingering tannins".

I held half the bottle and opened it the next evening and found even more pronounced fruits had taken over and the earth and leather were more subdued.

Selecting this as a Ricks Pick in an earlier tasting, I wrote: "This was simply terrific - big and bold with great depth, complexity, richness and concentration. Very much in the style of a traditional Napa cabernet with ripe, rich cassis and other dark fruits, a big, firm structure, full-body, velvety, smooth texture and a long finish. Adds aromas of tobacco and leather, and the fruits turn even darker after about an hour. This is an "in-your-face" style that somehow reminds me of many of the big Napa cabernets of the mid-to late 80's and 90's."

Posted by UnwindWine at 7:14 PM No comments: Links to this post