Home alone for the evening, as it protocol, I opened this 375ml half bottle to taste with dinner. Even then, I had one glass, half the half the first evening, and the remainder the following evening. This was a nice complement to some hearty cheeses and French bread.

I wrote about the allure of half bottles a couple times in recent weeks in these pages.


Château Corbin is one of the oldest estates in Saint-Emilion, dating back to the 15th century.
Built in the middle of the 19th century, Corbin was purchased in 1924 by the great-grandparents of the current owners. Since 1999, the estate has been managed by Anabelle Cruse-Bardinet, a Bordeaux University oenology graduate, who represents the 4th generation of the family. Jean-Philippe Fort, one of Michel Rolland's team of œnologists, has been Corbin’s wine-making consultant since 2006. 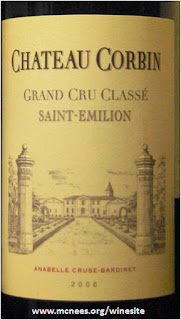 The Corbin vineyards cover 13 contiguous hectares (32 acres) in the commune of Saint-Emilion, adjacent to the Pomerol appellation. The grape varieties planted in the tradition of the 'Right Bank', 80% Merlot and 20% Cabernet Franc, with the average age of the vines being about 30 years. The finest grapes from the best plots and the oldest vines are used for making Château Corbin while grapes from younger vines go into a second label wine (XX de Corbin and DIVIN de Corbin).

I wrote recently about the Right Bank of Bordeaux and the grape varieties and style of wines produced there.

The producer's website lists sites where the wine can be obtained in the US, a small number of wine shops, including Bassin's MacArthur Wines in WDC, where I recall obtaining this bottle.

This was dark garnet colored, medium bodied, was a bit tight and closed the first evening, being more open and approachable the second day when the smoke, creosote, black olive and herb layer gave way to the dark berry and tangy black cherry fruits, with notes of cedar, black tea and clove spice turning to fine tannins on the crisp clean moderate finish.

http://www.chateau-corbin.com/uk/home.php
Posted by UnwindWine at 2:52 PM No comments: Links to this post