For a business dinner at The Clubhouse Restaurant in Oak Brook, IL, my colleague selected from the winelist this Simi Alexander Cabernet. It should be noted this is from Simi Winery and is not to be confused with Simi Valley which is down in southern California north of LA. Simi is located in the northern Alexander Valley in Sonoma County at the northern edge of the town of Healdsburg.

Simi has been producing Sonoma County wines since Guiseppe Simi arrived from Tuscany to develop the vineyards and winery. The property was in the Simi family until Isabelle Simi retired and sold the winery to Alexander Valley grape grower, Russell Green in 1970. Notable winemaker Zelma Long joined SIMI in 1979 and direct major renovation of the winery's fermentation and barrel rooms. 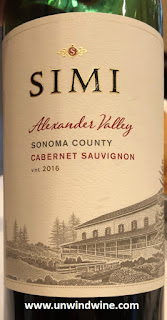 Since the 80's Simi has expanded vineyard ownership acquiring the Landslide Vineyard in Sonoma County and 100 acres in the Russian River Valley which they developed into Goldfields Vineyard with Chardonnay.

Decent for the modest price-point of this entry level Cabernet. Simi also offer three other premium vineyard designated select and a reserve Cabernets.

https://www.simiwinery.com/
Posted by UnwindWine at 8:00 AM No comments: Links to this post