Sister Jan visiting from So-Cal prompted a mini-family reunion so we pulled a pair of 2k cabs - a Napa Valley Robert Craig Affinity, and a Sonoma Valley Arrowood for a comparison tasting with our Italian Beef dinner. Jan and bro-in-law Bill have joined us in some of our memorable visits to the Robert Craig estate high atop Howell Mountain and thus are fans and collectors of Craig Cabs, so we naturally started with a Craig Cab. Son Ryan had just recently had a vintage Arrowood Cab and wanted to try a different vintage from my vertical collection in the cellar. Hence the intersection of these two choices with these two wines. Two adjacent valleys and one varietal reveals diverse terrior and styles in this mini-horizontal tasting.

We write often here about Robert Craig Cabernets and his Affinity label representing 'three mountains and a valley,' for good QPR (quality-price-ratio) in a sophisticated Cab - Mt Veeder, Howell Mtn, Napa Valley, and Spring Mountain, or occasionally some Mount George. I might call Affinity Craig's 'flagship' or signature blend, but its priced to be more affordable than his single vineyard or single mountain designated labels from the three Mountains above. We hold or have held every vintage of this wine dating back to the inaugural release in 1993 including this fifteen year 2000 release which according to records is one of our last few remaining from this vintage. This showed more fruit, balance and complexity than recent earlier tastings. Dark purple/garnet colored, medium to full bodied, this initially opened to a slight funkiness that revealed its age, which soon burned off to a complex, polished, nicely balanced sophisticated Cabernet with forward black berry and black raspberry fruits with a layer of pleasant, sweet, spicy oak accented by hint of tobacco leaf, black tea and leather, turning to tones of black cherry on the lingering moderate tannin finish.

Still holding its own, and while it won't improve further, its probably at the end of its apex, but still well within the acceptable drinking window, again showing the age-ability of Robert Craig Cabernets.

While, as I wrote above, we hold the Robert Craig Affinity going back to 1993, we actually still hold this label going back to the 1991 vintage - the last bottle or two from a case acquired upon release back then. Records show we still hold ten vintages from that range of years.

To that end, we've enjoyed Arrowood cabs for a couple decades and consider it a benchmark best in class Sonoma Valley Cabernet, especially in this Sonoma County label which affords high QPR in a sophisticated quality Sonoma Cabernet. Like Craig above, we've enjoyed visiting the Arrowood estate in south east Sonoma Valley just north of the town of Sonoma, during our visits to the region. 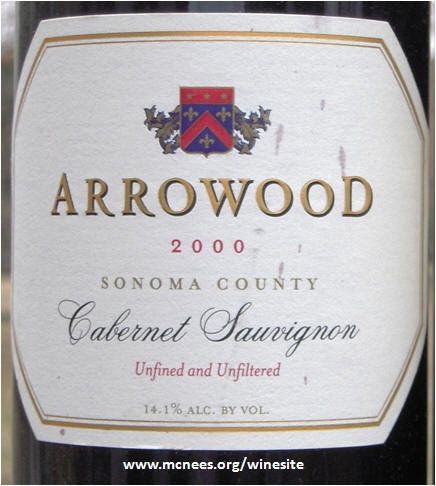 Like the Craig above, this too was holding its own, and while it won't improve further, its probably at the end of its apex, but still well within the acceptable drinking window, again showing the age-ability of Arrowood Cabernets.

We find that Sonoma Cabernets generally tend to be softer, 'smaller' or lighter, and less complex that their counterparts in Napa Valley - traits that I attribute to the slightly cooler climate as part of the Sonoma terrior. This is due in part to the fact that Sonoma Valley lies to the west of Napa Valley, closer to, and a mountain range less removed from the Pacific Ocean.

This Arrowood was dark garnet colored with bright vibrant cherry, black cherry and plum fruits, with a layer of cedar (a tone that some might refer to a 'mint'), some slightly earthy leather and spice on a tangy spicy modest subdued oak, lingering tannin finish.

http://www.arrowoodvineyards.com/
Posted by UnwindWine at 7:01 PM No comments: Links to this post