Josh Jensen and his legendary Calera Vineyards were featured in Marq Devillier's wonderful 1994 book - "The Heartbreak Grape: A California Winemaker's Search for the Perfect Pinot Noir". The story tells the tale of Josh's quest to grow the very finnicky Pinot Noir grape in California in the early days before Pinot was cultivated here. In pursuit of his dream to create authentic Burgundian style wines, he sought to find the place in California suitable to achieve that goal. It tells of his research to find the right terrior - all the attributes of the right location, soil, climate, drainage, and other nuances of 'place' that make up the character and personality of a wine from grapes of a particular site. Josh chose Mt. Harlan, an area not then know for grapes or winemaking. The rest, as they say, is history. While it is a human interest tale, it also provides a rich insight into the challenges and travails of setting up a winery, and a business, and achieving one's dream to make noteworthy wines.

Calera’s Mt. Harlan Vineyards are located in Hollister, California, in the Gavilan Mountains, 25 miles east of the Monterey Bay. The site was chosen for its limestone soils and ideal climate. At an average elevation of 2,200 feet it is among the highest and coolest vineyard sites in California.

As in the great region of Burgundy which inspired Josh to pursue his dream of making great wines in the old world authentic style, he planted the varietals of Burgundy, Pinot Nor and Chardonnay. The wines produced from Calera’s Mt. Harlan Chardonnay Vineyard display a minerality that is much more typical to fine white Burgundy than to California chardonnay, meeting Josh's objective of creating wines in the style of the old world classics.

We are long time fans of Calera Pinot Noir's and are delighted to showcase this Chardonnay release. Calera's 6 acre Mt. Harlan Chardonnay Vineyard was planted in 1984 on the same south facing slope as the Mills Vineyard Pinot Noir. This vineyard was planted on its own roots using plant material from stray chardonnay vines that were found interspersed among the pinot vines of the original vineyards. Each year this vineyard yields only slightly more than 2 tons to the acre of very intense flavorful chardonnay fruit. 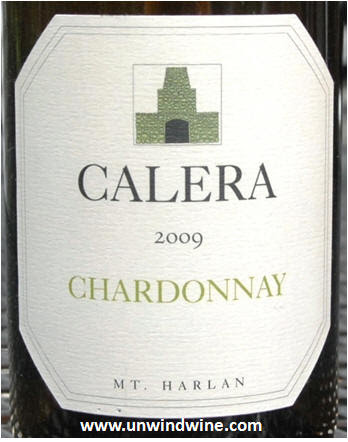 The 2009 Mt Harlan Chardonnay is medium bodied, clean and crisp with nice balanced acidity for pleasant easy drinking, yet its sophisticated and complex to be  enjoyed with fine foods. Scents of lemon, gooseberry and honeysuckle, it opens with flavors of golden apple and pear and a layer of subtle almond and vanilla with a touch of smoky oak on the smooth lingering finish.

This was a great accompaniment to grilled salmon fillet and roasted potatoes.
RM 90 points.

Enjoy the wine, and the book!

Posted by UnwindWine at 9:41 PM No comments:

We discovered Gigondas ((jhee-gon-dahs) during our visit to the Southern Rhone River Valley region in 1998. Gigondas produces red wine grapes, the most predominant being Grenache and best known being Syrah along with the lesser known Rhone varietals Mourvedre, Cinsault, and Carignane. Grenache is the main grape, making up to (but not to exceed) 80% of the wine, Syrah, Mourvedre and Cinsault make up the remainder, although some other Cote-du-Rhone varietals may be found in small amounts. A small amount of dry spicy Rosé is produced but not seen much in the export market.

Domaine du Pesquier Gigondas regularly receives high marks from Wine Spectator and other reviewers. The 1999 received the highly acclaimed 'Spectator Selection' (SS) from Wine Spectator upon release and review. At a release price of $20 this represented high QPR - (Quality to Price ratio) and great value for such a rating and distinction.

As Wine Spectator gave this a 'SS' and a Rating of 94 I'll refer to their review. "Rich and ripe, a lovely and seductive Rhône red. Packed with wild herb, plum and blackberry complexity, it caresses the palate with its rich fruit and silky tannins. Full-bodied, with mineral, slight smoke, leather and game character on the finish."

Ten years later, here is my review of this wine now. "Starting to show its age - a slight brownish grey tinge on the dark garnet color - leather, game, smoke,  and layers of herb and anise and a hint of earthy cedar taking over from the berry, black cherry and spice. - RM 88 points.

Gigondas is the appellation above and adjacent to the more famous Chateauneuf-du-Pape in the southern Rhone River valley wine region in southeast France. Gigondas is situated under the rugged, rocky range of the Dentelles de Montmirail. The vineyards of Gigondas are planted on hillsides at the foot of Mont Ventoux, directly north-east of the town of Orange. Venture up to the top of the mountain to the very picturesque village of Segurat overlooking the valley below. The region, once a Cotes-du-Rhone village, gained its own appellation in 1971.


We toured Gigondas during our visit to the region in 1998. Gigondas produces red wine grapes, the most popular and best known being Syrah along with the lesser known Rhone varietals Mourvedre, Grenache, and Carignane. Grenache is the main grape, making up to (but not to exceed) 80% of the wine, Syrah, Mourvedre and Cinsault make up the remainder, although some other Cote-du-Rhone varietals may be found in small amounts. A small amount of dry spicy Rosé is produced but not seen much in the export market.

Poor man's Chateauneuf-du-Pape? Gigondas wines tend to offer great values compared to the pricier higher profile Chateauneuf-du-Pape (CDP) wines which are more complex and sophisticated in that they are comprised of a blend of up to twelve different varietals authorized in that appellation.


Gigondas tend to be less polished, less complex and less ageworthy than CDP's as they tend to be big, bold and robust, fruit filled, forward spicy, leathery rustic edgy flavored wines that are not for the feint of heart. Gigondas' top quality reds sometimes rival its southwest neighbor, Chateauneuf-du-Pape. Top Gigondas wines will age for up to 10 or 15 years, although they are able to be enjoyed young if you like robust wines. They will benefit from at least three years of cellaring. Many Gigondas are predominantly Grenache which is not recommended for extended aging. Some other popular Gigondas producers commonly found in the US are Chateau Saint Cosme, Guigal, Perrin et Fils, Raspail Ay, Montirius and Domaine des Espiers.

Perhaps the best known and most popular varietal from the Southern Rhone Valley wines is Syrah which has become immensely popular in Australia where they produce big, bright, bold full flavored  fruit forward wines. Note Syrah is also known down under as Shiraz. We also now find Syrah being produced in limited quantities in California, mostly in Paso Robles area and some in appellations in northern California, including Napa Valley.

Stephen Lagier and Carole Meredith produce their Lagier-Meredith label Syrah based Rhone style wines from their mountain top estate high above Yountville on Mt Veeder in Napa Valley. As we are such huge fans of Syrah and Shiraz, I always wondered about the differences in the various Syrah/Shiraz varietals from the old world (France) and the new world (Australia and the US). I found the answer during our visit to Lagier-Meredith Vineyards in Napa Valley during our Mt Veeder tour this spring.


Carole Meredith was a professor in the Department of Viticulture and Enology at the University of California at Davis where she conducted research in grape genetics. Her research group used DNA typing methods to discover the origins of some of the greatest old wine varieties, including Cabernet Sauvignon, Chardonnay, Zinfandel and Syrah. Carol Meredith is a geneticist and has studied and specializes in the Syrah varietal. She attests the Syrahs from Australia and Napa are the same as their ancestors from the old world Rhone River valley where they have been grown since the 16th Century. Lagier-Meredith produce Syrah varietal wines that are true to their heritage as they strive to produce wines in the traditional Rhone style.

If you travel to Gigondas and wish to visit
Domaine du Pesquier:

Posted by UnwindWine at 7:17 PM No comments: