Ridge Vineyards are mostly known for their broad selection of single vineyard select Zinfandels from a dozen vineyards across Northern California Napa and Sonoma Counties, but their flagship premier label is this Bordeaux blend from the Santa Cruz Mountains AVA (Agricultural Viticultural Area - aka appellation). 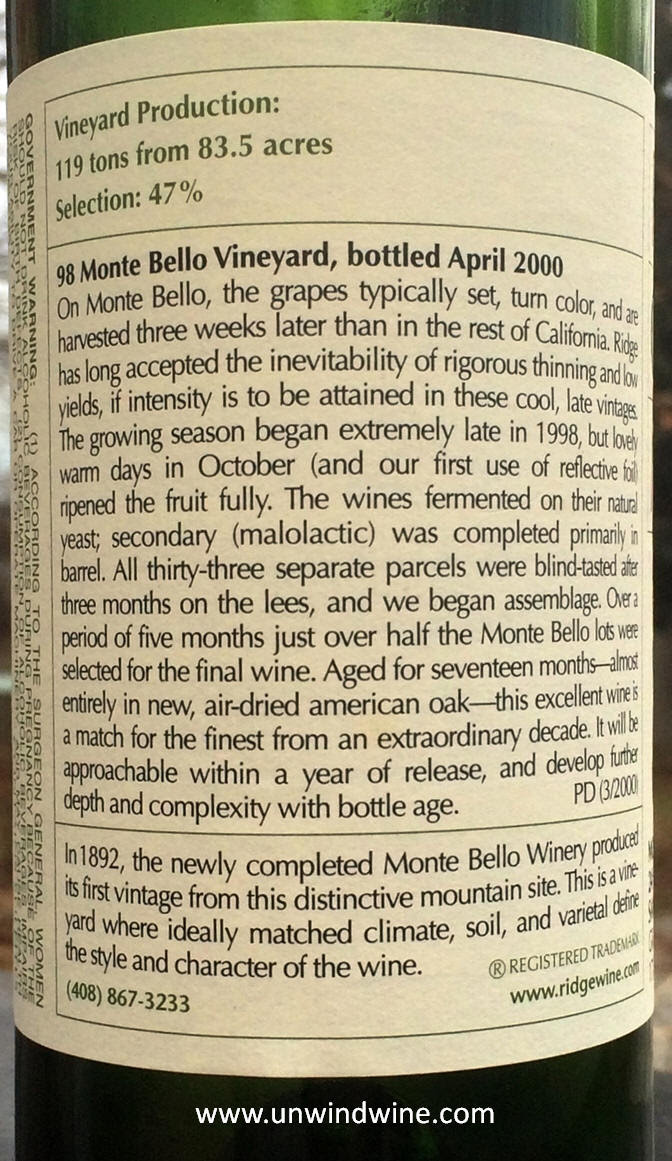 The Monte Bello estate and vineyard sit high above Silicon Valley in the range that separates south San Francisco Bay from the Pacific Ocean. The historic estate is the site of the legendary vineyard, and an old stone winery built by Dr. Osea Perrone back in 1892, the year of the first vintage release from the property. Today, it houses the production facility and includes a tasting room. The property was purchased in 1959 by four Stanford Research scientists who released their first Ridge Monte Bello label in 1962.  Paul Draper, winemaker to this day, joined Ridge in 1969, took over production of red wines the next year, and became winemaker in 1971.

There are 83.5 acres of vineyards on the property consisting of thirty-three different parcels sitting between 1400 and 2700 feet in elevation, which come as close as fifteen miles from the Pacific Coast, and is therefore one of the coolest Cabernet Sauvignon sites in California. The grapes here typically set, turn color, ripen and are harvested three weeks later than typical Cabernet sites in the hotter Napa, and to a slightly lesser degree, Sonoma counties.

Back in the early eighties, we lived in Silicon Valley and our house was up against the foothills in the tony town of Saratoga, down in the corner of Silicon Valley, below the Santa Cruz viticultural area on the Bay side of the range. Our home sat on what at one time were vineyards, and moreso, apricot orchards, which eventually gave way to the sprawl of development in the bustling high tech region of suburban San Jose. 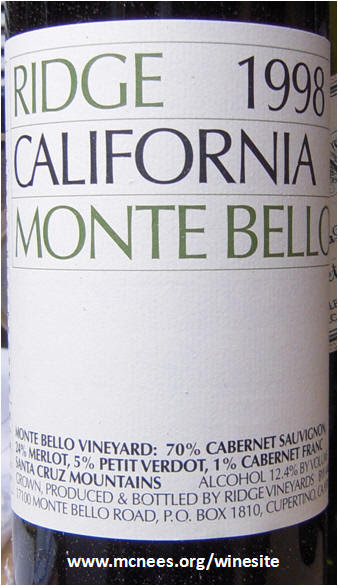 Monte Bello has been called an American 'first growth' and is known for bold, complex, long lived Bordeaux style wines. While 1998 was considered an 'off' year in Napa and Sonoma Counties, the Santa Cruz AVA, ninety miles to the south was not so afflicted. This was our second to last bottle from a case we purchased on release and based on this tasting, we need not be in a hurry to consume the final bottle.

At seventeen years, this showed no diminution from age and may be at the apex of its drinking window, not likely to improve any with further aging, but no need to rush to consume remaining bottle (s).

Dark purple garnet colored, medium to full bodied, initially a bit obtuse and acidic, but softened and opened after decanting and sitting for an hour, full, moderately expressive black berry and plum fruits, complex, nicely polished, accented by subtle tones of  pencil shavings, tobacco leaf, violets, and hints of bell pepper and anise with moderate smooth silky tannins on the finish. It would be overstated to characterize it as 'earthy' but there is a layer of complexity that reflects the storied terroir and reveals the care of 47%  selection and the rigorous thinning that results in extremely selective, low yields of less than 1 1/2 tons per acre. In the classic left bank Bordeaux style, the blend is Cabernet Sauvignon 70%, Merlot 24%, Petit Verdot 5%, and Cabernet Franc 1%. 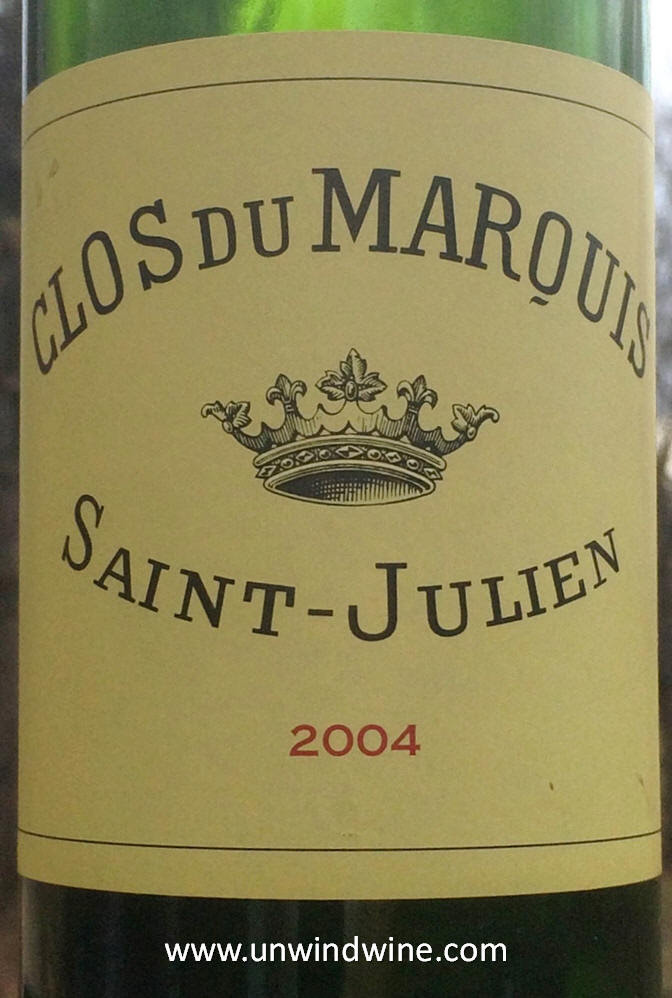 This is the second wine of the classic Leoville Las Cases St Julien, Bordeaux, one of my absolute favorite Bordeaux and overall wines.

Dark garnet colored, medium bodied, moderate black currant/berry and black cherry fruits accented by floral tones give way to tones of leather, tobacco, hints of dried herbs and re-emergence of black cherry with moderate tannins on the finish. Not a fair fight perhaps as it was overshadowed against the more complex and bigger Monte Bello. 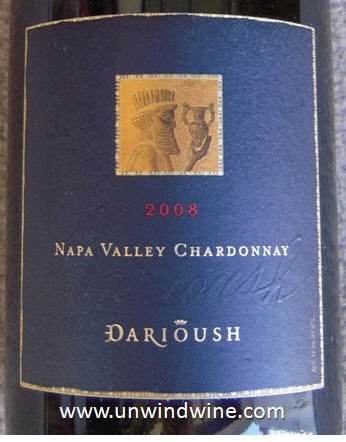 For the lobster medallion accompaniment I pulled this Chardonnay from the cellar. We first discovered Darioush when Bill and Beth hosted us at a wine dinner at Cress Creek Country Club a dozen years ago and we had the Darioush Cabernet. That was the beginning of our extraordinary wine friendship.

Darioush has since been the feature of several wine dinners, a special winery visit with barrel tasting, and a spectacular winemaker dinner at Everest Restaurant in Chicago. So I favored this Darioush selection for our dinner tonight. I normally don't get excited about a white wine but this was one of the highlights of our surf and turf dinner - a perfect accompaniment to lobster medallions and the salad.

We visited the winery during our Napa Valley Wine Experience in 2003. Their fabulous winery and tasting facility on Silverado Trail in southern Napa Valley was not yet open but was well under construction at that time.

The Darioush was butter colored, medium bodied, crisp and clean, initially slightly forward overtly acidic with tones of oak, but after an hour it settled down and was smooth, polished and balanced with pleasant  layers of fruit - subtle pear, lychee, melon and slight hint of citrus and vanilla with just the right accent of soft smooth oak.