We went to our favorite local Italian Trattoria, Angelis Italian for Saturday night dinner and took along BYOB this just received Marco Di Guilio Pym Rae Vineyard Mt Veeder Cabernet Sauvignon. I acquired this wine at auction over the winter from Winebid.com who used to have an office and warehouse in nearby Elmhurst, IL and by regular arrangement, they would ship my wine there for pick-up. I arranged to pick up this and other purchases over the (Christmas) holidays only to learn they had closed the facility and shipped my wine back to California. I am only now receiving this wine and able to try it.

We discovered winemaker Marco DiGuilio and his artfully crafted vineyard designated select Napa Cabernets back around the turn of the century. We still hold several vintages of his Mt Veeder Progeny Vineyard, Diamond Mountain Mark K Vineyard and just obtained this Pym-Rae Vineyard Mt. Veeder Cabernet Sauvignon. Wow! This was the most expressive and vibrant of all the labels we have tasted. It blew me away vastly exceeding my preset expectations based on the other labels.


Marco was born and raised in San Francisco where his parents settled after emigrating from Tuscany and become successful Bay Area restaurateurs. As can be imagined, wine was an everyday part of their North Beach household life and Marco inherited his family's appreciation for great wine and food.

Marco studied winemaking and viticulture and graduated with a degree in Fermentation Science from the University of California at Davis in 1985.

He worked for two years at Buena Vista Winery, then was cellar master at Pine Ridge Winery for more than four years, moving to be production manager at Atlas Peak Vineyards, and in 1994 became winemaker for Pezzi King Vineyards, then Pepi Winery in Oakville. While at Pepi Wines, he took on the Lokoya brand after the death of celebrated winemaker and mentor Greg Upton. It was at Lokoya that Marco's reputation for making world class Cabernet Sauvignon was first established.

Marco then turned his attention to his personal projects such as Vintage Wine Estates and Bin to Bottle where he consults with many leading quality brands from Napa and Sonoma, and his other favored projects and releases from Lookout Ridge and Marco DiGiulio Wines.


I wrote earlier that this Pym-Rae Vineyard Mt Veeder Cabernet Sauvignon was the most expressive and vibrant of all the Marco Di Guilio labels we have tasted. It blew me away vastly exceeding my preset expectations based on the other labels. Upon further research it is remarkable to learn that I hold wine from this property dating back to the early 1990's under a different label which is the one of the largest holdings in my collection - Robert Craig.

The property historically was better known as the the Robin Williams Napa Valley vineyard and estate. The name Pym-Rae is a hommage to the late Robin Williams as that was the name Robin Williams gave to the vineyards. The inspiration behind the odd sounding Pym-Rae is quite simple. It combines the middle names of Robin William’s 2 eldest children, Zachary Pym Williams and Zelda Rae Williams.

While the Pym-Rae vineyard was cultivated in about 1990, it was not an active winery. The grapes were sold to various local producers including Robert Craig, Vineyard 29 and Rombauer. Robert Craig was winemaker for Robin Williams wines for more than a dozen years and when he started producing wines under his own label he sourced his Mt Veeder Cabernet Sauvignon from there. We hold vintages of Robert Craig wines including this Mt Veeder label back to the inaugural release in 1993, and more than two dozen vintages of his labels since!

Robert Craig's website notes the end of their supply of fruit from this wineyard; "Bob Craig consulted on the development of the late Robin Williams’ 17-acre Pym Rae vineyard in 1990 and, since then, we have received the majority of the fruit from this terrific property. The vineyard is one of the highest in the AVA, topping out at over 1800’ in elevation with a distinctive blue shale subsoil and shallow, sandstone topsoil. The vines are mature which translates the soils and minerals straight into the finished wines. The sparse yields of less than 2.4 tons an acre make for dense wines that are expressive of the vineyard site. Our final vintage from this lovely vineyard will be the 2015 vintage and we will miss it. We harvested our first crop from our own vineyard in October of 2016 which neighbors the Pym Rae site."

The entire Pym-Rae property totaled 640 acres, purchased by Robin Williams in 1994. He referred to the estate as Villa Sorriso, which is translated to “Villa of Smiles.” The sprawling 640 acre estate is situated at the end of Wall Road, which takes its name from Duane Wall. Duane Wall was the popular sales rep for Nadalie for years. Nadalie is the producer of French oak barrels. The magnificent property covering over 600 acres was planted with 18,5 acres of vines in 1990 over very steep hills.

The vines were planted in the grape varieties of Bordeaux: 75% Cabernet Sauvignon, 7% Cabernet Franc, and 18% Merlot. The vineyards are situated in the heart of the Mount Veeder Appellation in Napa Valley at an average altitude is of 500m (1500 feet), allowing a certain freshness in the vines and giving balance in the wines. Until now, all grapes harvested had been sold to different wineries of "Napa Valley".

According to Cellartracker, there are listed Marco Di Guilio Pym Rae Vineyard Mt Veeder Cabernet Sauvignon releases for 2005 and 2004. There are only a few tasting notes published on the site (which has more than 5 million tasting notes of hundred of thousands of labels).

In 2014 and 2015, wine from the vineyard was featured in the label, Pilcrow Cabernet Sauvignon, Pym Rae Vineyard, from this boutique winery. This premium label was featured on their website at https://www.pilcrow-wine.com/ and apparently still offers some of the 2015 release for $95. Stay tuned as I am trying to acquire some and will report on such accordingly.


In January 2016 the property was acquired by the Tesseron family, owners of Chateau Pontet-Canet and Tesseron Cognac. They acquired Villa Sorriso and created the "Tesseron Estate".

The Pym-Rae Tesseron Estate came with a massive, stunningly beautiful, home that was designed by David Gast and Associates and built in 2003. The 2 story Italian styled villa was the home of Robin Williams and includes a movie theater, 5 bedrooms, 10 bathrooms, a tennis court and infinity pool in the 20,000 square feet home.

Today, the Tesseron’s of Château Pontet-Canet have adapted the local conditions of Napa Valley and Mt Veeder and have entrusted the responsability of the vineyard to the young, Thomas Comme, who works in tight collaboration with his father, Jean-Michel Comme, the Régisseur of Pontet-Canet.

Since 2016, the vinification has been carried out by the usual team to produce highest quality wines to express the special magnificent and historic terroir of this estate. The 2017 vintage will be the first year where Alfred Tesseron and Melaine Tesseron exercised full control of the vineyards and wine making. 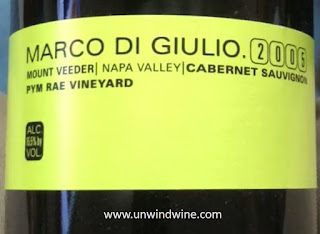 This 2005 Mt. Veeder Pym-Rae Cabernet was dark inky blackish garnet colored, full bodied, powerful and massively structured. Upon opening the fruit flavored exploded from the bottle into the glass. The forward rich fruits are layered with blackberry and blueberry accented by a tone of chocolate with nuances of smoke and spice, turning to an incredibly long finish.

I wish I could find more of this label and will watch for it and buy all that I can find. Watch for the new releases from Tesseron Estate as they come on the market in the coming years.