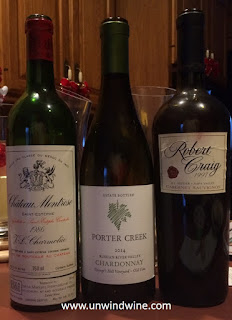 Trolling the cellar for appropriate wine selections, I was looking at vintage Bordeaux to accompany the beef tenderloin. I recall when it was released, Robert Parker wrote of the 1986 vintage how long lived many of these wines would be so I tucked many of them away for long (er) term cellaring. I'm not sure I intended to keep them this long, but in this case was rewarded here for doing so. 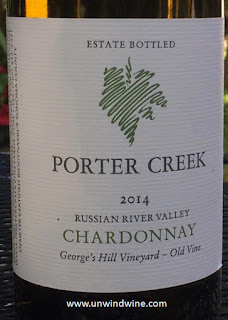 For the lobster course we served Porter Creek Russian River Valley Chardonnay. This is a single vineyard designated wine from old vines from the George's Hill Vineyard.

We discovered this producer, and tasted and acquired this wine during our visit to the winery during our winery visit on our trip to the Russian River Valley in Sonoma County this summer.

Straw colored and medium bodied, initially this was buttery but after opening for a while the citrus notes came through and gave way to a layer of passion fruit with hints of nutmeg on the crisp acidity finish.

When I opened this thirty-one year old Château Montrose, the bottom half of the cork was mushy and fill level of the bottle was at the lower neck. Aged wines are measured by the fill level, or the level of the remaining wine in the bottle. Over time a certain amount of wine will inevitably evaporate from the bottle. The effect of such evaporation is that the remaining void left from the departed wine is taken up by 'foreign' air from the outside which can 'contaminate' the wine. Hopefully, when this occurs very slowly over a long extended period of time, the deleterious effect is minimized.
saturated so it was certainly time to open this bottle as it would soon start to be undermined by the failing cork thereby exposing the wine to outside air. To date, though, it had held up and the wine was still fine. At thirty-one years, the

Hence it is important when cellaring and aging wines for an extended period, that effective humidity levels be maintained in the cellar, so as not to be humidifying the room with wine sucked out of the bottles. Also, minimizing variations in temperature is essential since such variations will result in air being sucked into and pushed out of the bottle as the wine expands and contracts from the changes in temperature. So, the stability of the temperature is as important as maintaining the appropriate temperature for aging. Opinions vary on the appropriate cellaring temperature, from 55 to 63 degrees is recommended. The cooler the temperature the more moderate the effects of aging. We tend to keep our cellar cooler than 'normal', closer to 55 degrees than 63, which is more suitable for and allowing for more subtle, longer term aging.

Folks often ask about where and how to store wines for aging. If determining a location for a rack or applicable storage space, opt for the basement or cellar for the obvious reasons of temperature moderation. One should also opt for a place near the sump pump pit where there is a natural consistent reservoir of water to address the humidity challenge, where such exists. This is most important in the dead of cold winter when temps drop and indoor relative humidity reaches dangerous low levels requiring external or supplemental humidification. A humidifier or baby nursery mister work and can help. In extreme (outside) weather, set up a bucket of water with a towel or rolled up newspaper to serve as a wick to help restore indoor relative humidity, anything to alleviate humidifying the air with wine through the corks!

Winemaker notes ... The wine reveals a dense ruby/purple color with only a hint of lightening at the edge. Fleshy, muscular and powerful, with aromas of red and black fruits, earth and spice, this medium to full-bodied, still tannic, brawny Montrose is not yet close to full maturity.

My notes: Opened and decanted for three hours before serving. This was dark garnet colored, medium full bodied, complex but nicely balanced, slightly subdued blackberry and black raspberry fruits accented with notes of leather, earth and spice with gripping tannins on the moderate acidic lingering finish.

Cellartracker drinking window shows this through 2022 which this tasting supports showing vibrancy still and no signs of diminution or deterioration from age. 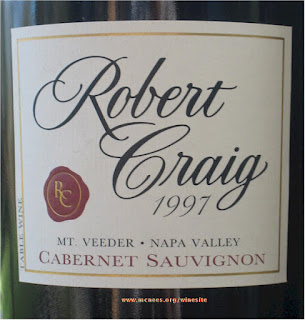 Adjacent to the Montrose we served this Robert Craig Mt Veeder Cabernet from the highly acclaimed top rated 1997 vintage. We hold close to two dozen vintages of Robert Craig Napa Cabernets, probably more than we hold from any other producer. We've visited the estate and winery on several occasions during our Napa wine trips. We have heard Robert say this is his favorite Cabernet from his "four mountain and a valley offerings".

There is still life left in this vintage label at twenty years of age, showing little to no diminution of fruits or flavor. This was ruby colored with bright, vibrant expressive fruit flavors, rich and concentrated black berry and black cherry fruits with tones of spice and cedar with hints of cassis, vanilla and dark mocha.