For a festive holiday dinner at Bill & Beth C's, Bill pulled a selection of aged vintage Freemark Abbey Cabernet Sauvignons from his new expanded cellar which now includes magnum racks. I added a Freemark Abbey Bosche 1992 to match with his 1991 which we compared with the Estate 1986 selection. For starters Bill opened at Freemark Abbey 'Bootleg' Cabernet Sauvignon Blend 2003 which we enjoyed with aged sharp cheddar and aged gouda artisan cheeses and mixed fresh berries.

Freemark Abbey has a long storied history in Napa Valley dating back to 1886 at its location on Rt 29 just above St Helena. Its modern day name dates back to 1939, when the three owners – Charles Freeman, Markquand Foster and Abbey Ahem – combined their names to form the moniker “Freemark Abbey.”

The Bosché vineyard designated selection dating back to the 1970 vintage was one of the first designated Cabernets in Napa Valley, following the legendary Heitz Cellars Martha's Vineyard first gaining such status in 1966. The fruit is sourced from the historic John Bosché 23-acre vineyard on the Rutherford Bench which Freemark Abbey procures and bottles exclusively.

In 1976, when wine expert Steven Spurrier conducted the now legendary 'Judgement of Paris' blind tasting made famous by the book of that name by George Taber, and then the recent popular movie "Bottle Shock", that pitted the upstart wines of California against the establishment of France; of the 12 American wineries chosen to compete, only Freemark Abbey had two wines represented – a Chardonnay and a Cabernet Sauvignon. In an upset that shocked the wine world, California wines won every category of the tasting, putting Napa Valley firmly on the world stage.

We're longtime fans of Freemark Abbey, witness by the fact we're opening bottles going back to the mid-eighties. Our Freemark Abbey experience highlights include our visit to the winery during our Napa Wine Experience 2009, when Bill and I had a fun time touring their library cellar with Cellar Manager Barry Dodd (Bill and Barry, left). That day, we purchased two aged vintage selections - 1974 and 1978 commemorating our anniversary years, which we tasted that evening across the road at Graystoke Manor at the CIA (Culinary Institute of America) in St Helena.

The '92 Bosche that I brought last evening is one of the remaining bottles that I arranged to obtain through winery partner Jeff Jaegar whom I met at a another Freemark Abbey event, a tasting at Binny's in Naperville, back in the early nineties. Upon learning of our collection of large format bottles commemorating our kid's birth-years, Jeff sent us an Imperial of 1981 Jaegar Vineyards Napa Valley Merlot which we served at daughter Erin's wedding.

This evening we enjoyed the Freemark Abbey cabernet sauvignons over dinner of stewed beef bourguignon on toast points with pearl onions, carrots, fresh mushrooms and spinach raggout. The  wines were further enhanced with a desert selection of fresh  berries and pecan caramel squares. 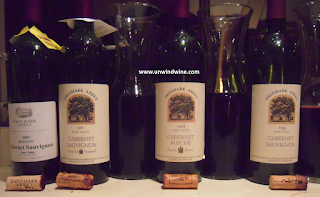 This rare limited release label is only available from the winery. It derives it name from the fateful miscue (or perhaps not?) in the barrel house when the wrong wines were blended together during the 2003 vintage. We discovered and tasted this wine during our winery visit in 2009. The resulting Blend was set-aside and bottled under this special 'Bootleg' label.


The character and profile of this wine rendered it almost as an aperitif served with the predinner cheeses.

What a surprise in this 25 year old. Who would expect this longevity in an Estate Napa cab? Like a wine of this age, upon opening and decanting this was closed and subdued with slightly tart black cherry fruit masked by leather, tobacco, tea and a slight earthiness. Over the ensuing three hours it mellowed and softened as the fruit exhibited more polish and balance with a surprising highlight of floral bouquet increasing throughout the evening. Eventually this could have passed as a vintage lower left bank Bordeaux save the modest tannins.

This bottle was suprisingly lean and austere, not what I recall from this Napa vintage generally, but revealed such against the '92 which showed markedly differently. Garnet colored with a brickish rim, this was light bodied with properly balanced but slightly tart black cherry and black berry fruits accented by tobacco, tea, cigar box and leather on a short modest short finish.

The highlight of the evening made for an interesting and fun vertical comparison. Still vibrant with life left, while nearing the end of its drinking window this has a fews years left and shows no signs of diminution. Dark garnet colored and medium bodied yet with distinctive 'legs' (or 'curtains' as my British friends call them), this exhibited polished and balanced concentrated black berry fruits with layer of spice, hint of smoke, eucalyptus, tobacco and spice box on a moderate smooth, integrated moderate tannin finish.

Posted by UnwindWine at 11:27 AM No comments: Links to this post