For a gala family birthday celebration dinner, I pulled from the cellar some vintage Napa Cabernets to pair with grilled sirloin steak and sea scallops. Between thundershowers we were able to eat on the deck. It was a wonderful gathering of our seven grandkids. 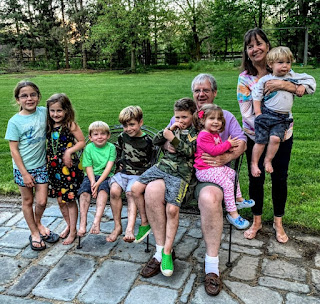 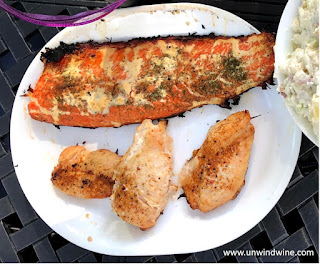 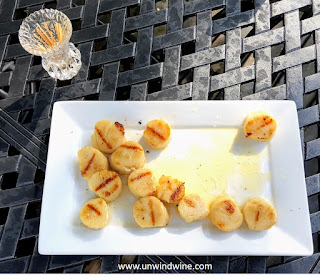 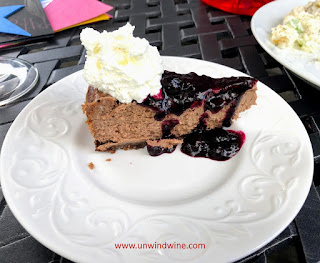 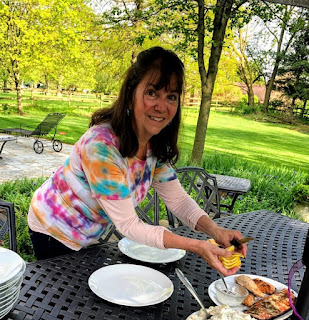 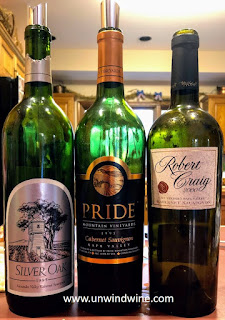 We had left over from the dinner selections the evening before a vintage Napa Cab and a Sauv Blanc. I started out looking to create a mini-horizontal tasting of the 2000 vintage to pair with the 2000 Craig Mt Veeder Cab we had left from last night. Digging through the cellar with son Ryan, we were evaluating a half dozen options when we came upon a selection '95 vintage releases. We opted for the older vintage as part of cellar management as well as just pure exploration. I still hold a half case of Pride Mountain cellars Cabernets from the mid-nineties as well as a broad selection of Silver Oaks from the era, so we pulled one of each.

Linda prepared grilled sea scallops, salmon and chicken breasts, so, with eight adults drinking, I opened a magnum of Bouchaine Napa Valley Carneros Chardonnay.  We also had the remains of the Cliff Lede Sauvignon Blanc from the night before.

Bouchaine claims to be the oldest continually operating winery in Carneros dating back to the first vines planted in the 1880s by local legend Boon Fly. The property has passed through several hands to the current owners Gerret and Tatiana Copeland who purchased the property in 1981. They were among the early planters of Pinot Noir and Chardonnay in Carneros.

Located down at the bottom of Carneros near the top of San Pablo Bay, Bouchaine produce about 22,000 cases of wine a year of Chardonnay and Pinots including , Pinot Noir, bright, spritzy Pinot Blanc, melony Pinot Gris and elegant Pinot Meunier, under the leadership of new winemaker Chris Kajani who was hired in 2015. 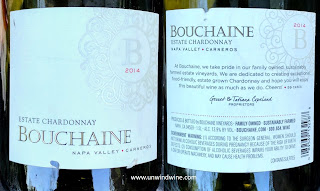 
This release got 92 points from Robert Parker Wine Advocate.


James Suckling-Napa Valley, California- "Orange peel, lemon zest, slate, nectarines and spices. Very understated and pretty on the palate with a medium to full body, reserved but present acidity and a bright finish."

This 2014 Chardonnay Estate is straw golden colored, medium-bodied, notes of orange blossoms, apple tart and lemon meringue, bright, citrus flavors with a hint of oak and a toasty undercurrent, the fresh and elegant, with a wonderful intensity of citrus flavors and long, mineral-laced finish. 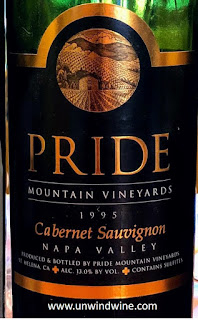 We still hold several bottles from a case we purchased at the winery during a visit to the estate high atop Spring Mountain above St Helena back in the late nineties.

While past the apex of its drinking window, this is still showing very nicely with sound color, and resolute structure.

Consistent with earlier tasting notes, dark, full bodied, firm, the full complex dark blackberry and black currant fruits are starting to give way to leather, mushroom, cedar, tobacco, smoke and earth still showing earlier hints of subtle dark mocha on the full firm lingering tannin finish. Still life left but should be consumed over the next couple of years.

I gave this 91 Points back in 2013 and 90 points in 2009. The Reserve bottling of this vintage got 98 points from Robert Parker and 97 points from Wine Spectator. 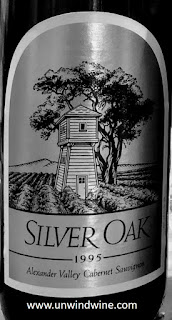 Ray Duncan and Justin Meyer founded Silver Oak Cellars in 1972 with the idea of making only one varietal – Cabernet Sauvignon. Meyer was a winemaker for Christian Brothers and Duncan brought his business background to the enterprise. In the nearly fifty years since, Silver Oak became one of the most successful in the state and has developed a cult following of folks who admire Silver Oak’s oak accented polished style of primarily Cabernet Sauvignon, sometimes blended with small amounts of Merlot, Cabernet Franc and Petit Verdot.

The winery owned 200 acres of vineyards in Alexander Valley and 15 in Napa Valley producing about 50,000 cases a year. Justin Meyer sold his shares of the winery to the Duncan family in 2001, and a second generation of Duncans operated winery operations before selling off their holdings a few years ago.

We hold a dozen and a half vintages of this iconic label dating back to the birthyear vintages of our kids in '81, '82, '85 and '90, of which we still hold in magnums. We also hold six liter bottles of the single vineyard designated bottling Bonny's Vineyard for son Alec's birthyear vintage, which we'll serve at his wedding this fall. So it is that we often open Silver Oak on special occasions.

Tonight this 1995 Alexander Valley Silver Oak Cab was showing its age as the color had taken on a slight browning on the rim and the fruits were starting to give way to some funkiness and earthy notes.

Dark garnet colored, medium full bodied, has a garnet hue with some slight browning at the rim, the black fruits were giving way to aromas of cigar box, leather and herb flavors with notes of cherries and dark chocolate and anise.

This release got 94 points Robert Parker's Wine Advocate  and 92 points from Wine Spectator.

Parker noted, "given proper cellaring, this wine can be enjoyed now through 2019".

Characterizing notes from Robert Parker, "Critics have argued that the wine does not age particularly well, but that has largely been proven a myth for some vintages. Silver Oak generally is not as long lived as Chateau Montelena, Dunn, or other Napa Cabernets with a 30-40 year aging potential, but they can have a broad window of drinkability, known to be delicious at release, and able to sustain their fruit and character for typically 15 or more years."

Posted by UnwindWine at 7:00 PM No comments: