As the Coronavirus shut-in continues, we ordered in, curbside carryout from our local neighborhood trattoria, Angelis Italian. 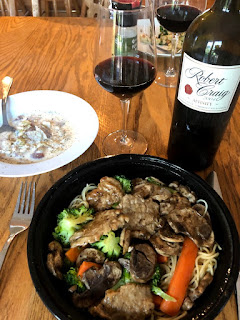 I ordered veal marsala and for pairing with it's brown sauce, I pulled from the cellar an old stand-by from one of our favorite producers, Robert Craig Napa Valley Affinity 2004.

As I have written numerous times in these pages, we've been collecting this wine since its' inaugural vintage in 1993 and we still hold several cases spread across almost two dozen vintages.

Crafted to provide a sophisticated Cabernet Sauvignon at a reasonable price with early gratification, Affinity defies this approach with its age worthiness, as this tasting testifies.

This label was also understated in another way, it is actually a Bordeaux Blend and contains the other Bordeaux varietals. The Cabernet Sauvignon is sourced from Craig vineyards and contract sources throughout Napa Valley. Robert used to refer to it as "three mountains and a Valley", referring to their vineyards and sources on Howell Mountain, Mt Veeder, Atlas Peak, Mt George, and the valley floor. According to the rear label, this 2004 Affinity release was 'sourced from the Tulocay estate in southern Napa Valley, blended with Cabernet, Merlot, Cabernet Franc and Petit Verdot from exceptional vineyards in Napa Valley'. As was often the case, the specifics of blend was not specified.

We may hold more Robert Craig wine in our cellar than any other producer. We've been fans of Robert Craig since the early nineties. We've been to many events at the winery as well as several private functions with Robert, his wife Lynn, and former hospitality and wine club ambassador, Rachel, and various members of the Craig team.

I remember Robert Craig exclaiming his love for this label and how proud he was to hold it to an affordable pricepoint to introduce consumers to Robert Craig wines. I've written recently that in recent years, as Robert and Lynn turned over the reigns to new management, and the recent passing of Robert, this label has crept up in price significantly and is now priced where their premium labels used to be. Never-the-less, it provides good value and quality drinking both early and yet also stands up to aging. 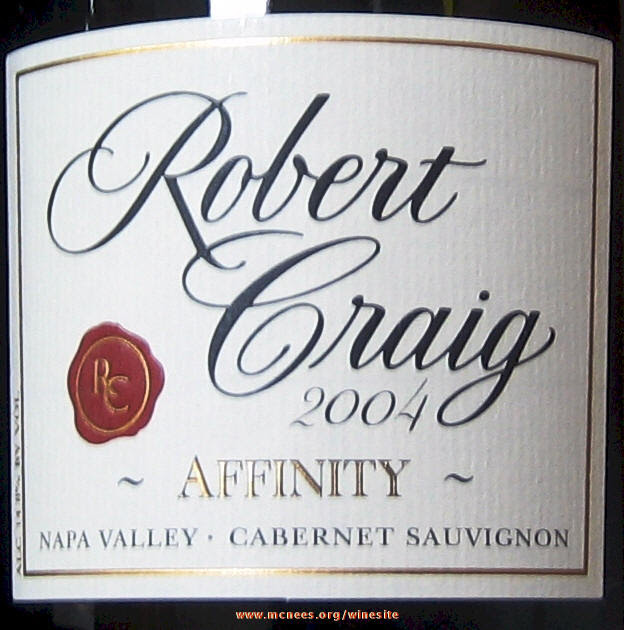 Tonight, at sixteen years of age, this release may be at the apex of its drinking window and is as good as ever.  In an earlier tasting when I wrote, "Tasted from a 375 ml split. In this smaller format, it may be starting to show its age," I attribute that to perhaps a combination of bottle variation and the smaller format which ages less gracefully.

RM 90 points, increased a point from past tastings.