Following our COVID shut-in virtual family dinner and wine tasting last evening where son Ryan had barbecue ribs and L'Aventure "Optimus", (and our original such event last weekend), Linda prepared grilled barbecue ribs and I pulled from our cellar the same label for pairing.

Readers of this blog know we love Shiraz/Syrah, and we love big bold fruit forward and structured wines. What could be better, then, than a big fruity Syrah, bolstered by structure of Cabernet Sauvignon, augmented by highlights of dark fruits and backbone of Petit Verdot! And, what better pairing for such a wine than barbecue ribs! 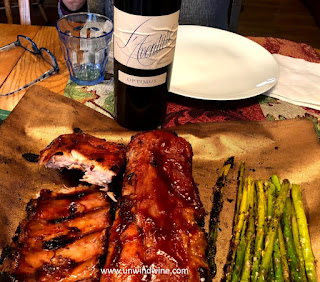 Frenchman Stephan Asseo studied oenology L'Ecole Oenologique de Macon, Burgundy and began making wine in 1982. He established Domaine de Courteillac in Bordeaux and with his family, later purchased Chateau Fleur Cardinal and Chateau Robin in the Cotes de Castillion, Bordeaux. Over the next 15 years he honed his craft as an artisan winemaker and gained a reputation as a maverick vigneron.

After searching for over a year among the world's great wine regions for an ideal location to produce his wines, he fell in love with Paso Robles. In 1996, he came to America with his wife, Beatrice and his three children, where he would not constrained by the strict rigorous French AOC regulations. He started L’Aventure on a 127-acre estate in 1998 in Paso Robles in the Santa Lucia Mountain Range on the California Central Coast. He released his first vintages the late 1990s and today crafts innovative blends of Bordeaux and Rhone varietals including his flagship wines Optimus and Estate Cuvee, both blends of Cabernet Sauvignon and Syrah.

It is always a priority at L’Aventure to harvest the individual clusters of the grapes and work the various blocks in the vineyards at the optimal time. This attention to detail and commitment to quality costs L’Aventure up to five times the labor and production costs of other producers.

Syrah is the primary varietal planted at L’Aventure, planted up and down the four hillsides that make up the estate vineyards. As the crowns of each hill mature, they are the hilltops to be picked pick. It could be a week or two later before they descend on the middle band of vines, and it can be up to a month later before they pick the bottom third of the hill, which retains more water, enjoys richer soil, and therefore matures fruit later.

Robert M. Parker has written that “Asseo continues to go from strength to strength, producing a fabulous portfolio of wines that makes L’Aventure one of the bright, shining reference points for the region. This is one of the California Central Coast superstars…” 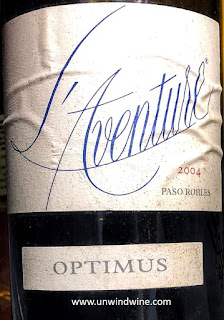 The 2004 Optimus, L'Aventure's signature "Paso Blend," is a blend of 57% Syrah, 35% Cabernet Sauvignon, and 8% Petit Verdot. This was the greatest percentage of Petit Verdot ever to be used in the Optimus blend resulting in tight focus and extraordinary grip.

Like Ryan's experience the other evening, as soon as the cork was released from the bottle, the room erupted with aromas of black berry fruits.