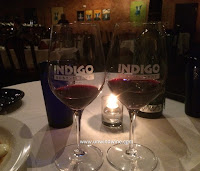 Traveling to Springfield, IL this week, we dined at our favorite site there, Indigo Restaurant. I took from the home cellar BYOB this Robert Craig Howell Mountain Cabernet. This was perfect accompaniment to both my filet of beef and Linda's Ahi Tuna steak and the delectable creme brulee'.

Robert Craig Cabernet is featured often in these pages, as it is the largest or one of the largest producer holding in our cellar. Of the five or six different Cabernet labels offered by Robert Craig, his Howell Mountain is my perennial favorite, and Howell Mtn is one of my favorite appellations of the seventeen found in Napa Valley.

We've focused on and visited Howell Mountain producers on several of our Napa Valley trips - most notably, Arns, Dunn Vineyards, Clark Claudon, Viader, Ladera, and Lamborn. Our holdings of these labels from Howell Mountain may be the most represented appellation of the more than 1200 Napa Cabs in our cellar.

Howell Mountain is located in the northeast corner of Napa Valley at the north end of the Vaca mountain range that forms the eastern boundary wall of the valley. The elevation of its vineyards ranged between 1,400 and 2,200 feet above sea level. This is interesting and notable since the elevation means that the vines are located above the fog line which rolls in from San Pablo Bay and the valley floor. That fog line reaching up to 1200 feet in elevation is the demarcation point between the Napa Valley and the Howell Mountain appellations, since it's impact results in different sub-climate growing conditions, thereby resulting in the distinctive terroir of the two areas. Being above the fog lines results in more sunlight, cooler days and warmer nights.

The Howell Mountain A.V.A. (American Viticultural Area, as designated by the US Dept. of  Treasury Alcohol And Tobacco Bureau) was the first sub appellation of Napa when it was designated back in 1983. The area is notable for its two soil types: volcanic ash, also known as “Tuff’, and a dry red clay, both of which are nutrient deficient.  Combine that with the steep hillsides and rocky and porous terrain and you have an environment that places high stress on its vines, resulting in rich concentrated fruit. Stressing the vines produces smaller harvests and smaller berries, but the fruit that is produced is more concentrated, intense and complex, perfect for making superior wines. 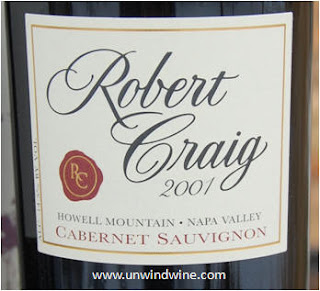 This Robert Craig Cabernet from the Howell Mountain appellation showed all those classic characteristics that showcase the terroir of the appellation.

At 16 years of age, it drinking nicely, probably at its apex, with no signs of diminution whatsoever.

Posted by UnwindWine at 5:11 PM No comments: Links to this post